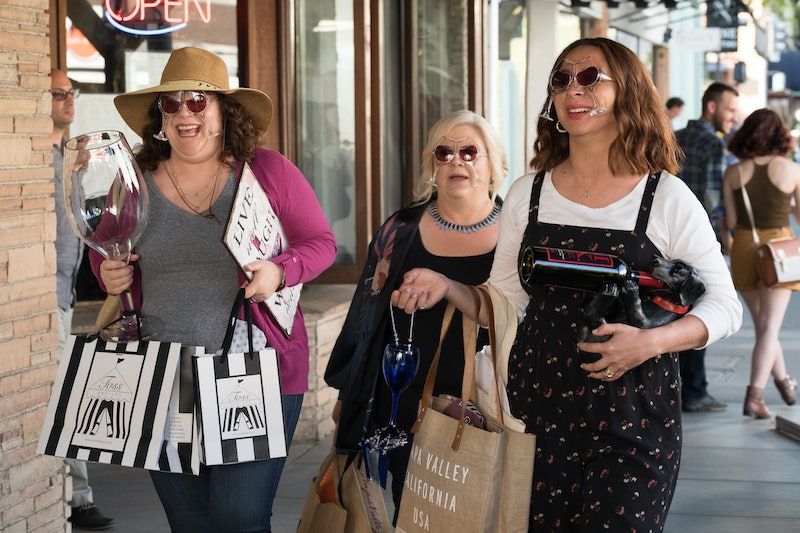 When Wine Country was announced, the description alone was enough to get people excited: a bunch of Saturday Night Live alums go on a girls trip and drink a lot of wine. And it turns out, Wine Country was inspired by a real trip the women actually went on. As explained in the featurette below, director Amy Poehler and writers Emily Spivey and Liz Cackowski got the idea of the movie from an actual getaway. So watching the Netflix premiere on May 10 will be the next best thing to having scored a real invite.

Wine Country is about a group of longtime friends who go to Napa to celebrate Rachel Dratch's character Rebecca's 50th birthday. These include, according to Netflix's official description, "Workaholic Catherine (Ana Gasteyer), post-op Val (Paula Pell), homebody Jenny (Emily Spivey), and weary mom Naomi (Maya Rudolph)." The movie also features Poehler, as the friend who planned the trip, as well as Cackowski and Tina Fey.

In the featurette, Poehler explains, "We all went on this trip together in Napa Valley and started talking about how fun it would be to make a film about female friendship and base it off of our real friendship." Pell says, "We’re playing lose version of ourselves", and Gasteyer adds, "We represent all units of drunkard women on getaways. It’s deeply biographical without telling the truth."

The trip Poehler refers to actually was for Dratch's 50th birthday. The group also went to Palm Springs for Gasteyer's 50th. Poehler told Vanity Fair in a joint interview with Rudolph, that she thought the trips could make for a movie "not only because these are the greatest, funniest performers, but there’s just not enough films that take full advantage of what it’s like to be our age and to be around women that have known you for a really long time but aren’t competing for the same job or the same guy."

In the interview, Poehler also got at what Gasteyer was probably talking about when she said the characters "represent all units of drunkard women", because the friends all have very distinct personalities. Poehler explained how she thought she dropped her phone in the plane toilet during the flight to Napa and the women all reacted in ways that summed them up perfectly. There was Rudolph's "Let me get some gloves, I’m gonna look for that phone!" and Gasteyer's "Your phone’s in your bag. Don’t worry about it." (Just so you know, the phone was in her bag.)

In the clip, Poehler says that she and the other women bonded over being "in the trenches together" at SNL, but, clearly, their relationships go far beyond that common factor now. And aside from being friends, they've also worked on other projects together, including Sisters, which starred Poehler and Fey and was written by Pell, and Mean Girls, which Fey wrote and acted in and also featured Gasteyer and Poehler.

Wine Country is almost certain to be a hit, and maybe it won't be the last movie from the group. When four of the women appeared on Watch What Happens Live, Andy Cohen suggested they get together every year for a film, and Pell responded, "We had a joke about it, because we had so much fun ... We were like, oh my god, if we could just do this every year we’d quit show business." Well, technically, it'd still be show business, but for these buddies, apparently, it doesn't feel like it.

More like this
Here’s Everything Coming To & Leaving Netflix In October
By Jake Viswanath
What’s New On Netflix: Meet 'The Real Bling Ring'
By Arya Roshanian
What’s New On Netflix: Camila Mendes & Maya Hawke 'Do Revenge'
By Arya Roshanian
Florence Pugh Reflected On Her ‘Don’t Worry Darling’ Experience On Opening Day
By Brad Witter
Get Even More From Bustle — Sign Up For The Newsletter