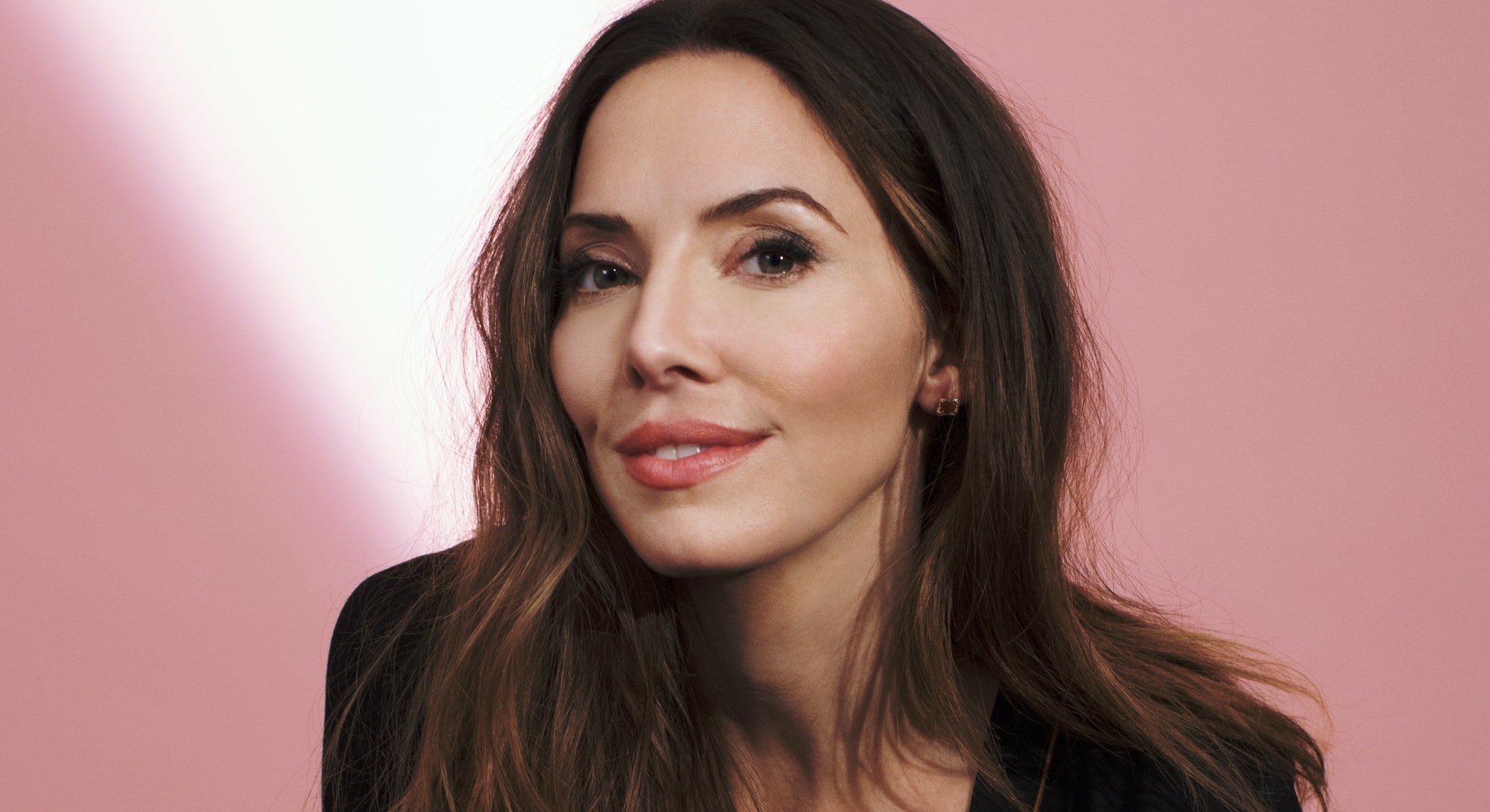 Whitney Cummings is gently lunging towards me. Her iPhone is unlocked, and open to a folder of inspirational quotes, texts, and images of herself as a child — all of which she's casually flipping through and explaining in detail. This folder, full of highly personal moments and pick-me-ups is not only visible to me, but she's practically handing me her iPhone — her own personal vault of highly intimate information. This is not the Cummings I thought I knew. She's a comic known for biting jokes, some so pointed that they drift into insult humor, and for creating series like Whitney and Two Broke Girls. But a purveyor of inspirational quotes and a veritable open book of a human, she was not — until now.

"Whenever those little bad ideas come up, I go into that little folder. We're on our phones constantly. I'm like, 'What if instead of just refreshing my Instagram feed, I went to this folder?'" she says, leaning back slightly into the copper love seat she's perched on. The phone is still open to an image of herself as child — the one she uses when she starts to hate her body and convince herself that she can "only Drink Diet Coke for a week."

...I felt guilty for having any kind of problems. I felt self indulgent for even labeling them as problems.

"I have an addictive personality. I can't change the way my brain needs dopamine, but I can change my unhealthy addictions into healthy addictions. That's what I'm trying to do, just re-channel how it works," she adds, echoing the central theme of her new memoir-slash-self-help-book, I'm Fine... And Other Lies — and probably, any person who's ever sought approval from likes on social media.

Cumming's new book tackles her most personal struggles, from the eating disorder that she struggled with from a young age, to her issues with addiction and subsequent medical problems, a boyfriend who attempted to sexually assault her, freezing her eggs, and learning that her signature insult humor actually seriously hurt Carmen Elektra's feelings. In the introduction of the book, she calls the exercise "masturbatory ramblings," but when she sits down at Bustle Headquarters, she offers something a little more hopeful.

"I hope it's more of a mirror for people to look at their own insecurities and fears," she says. "I spent all this money on all these therapists. I want to be like the Robin Hood of therapy, like steal it all and give it to you ... I hope people go on their way on their edification and growth and healing process and that they don't focus on me, but they focus on themselves."

But just because we don't ostensibly have it as bad as someone with cancer or a natural disaster, it doesn't mean that we don't deserve to take care of ourselves and our mental and emotional suffering.

It's something that even after the journey of writing this book — about herself — and doing so much work in therapy and other exercises — also on herself — that the comedian still struggles with. At one point in the memoir, she writes that after escaping what could have been a sexual assault, she didn't tell her mother what had happened to her and that even in writing about it, she feels as if she's "an ungrateful brat, a spoiled *sshole who doesn't even know what being victimized is or what real sexual assault feels like."

And even as we sit, discussing a book all about her, Cummings feels uncomfortable. "Not that anyone cares about this when it comes out, but today's a weird day," she says, referring to yet another devastating news story that broke a few hours before the interview. "We're living in this weird world where we think our problems are so big, and then you read the news and you're like, 'Heh.' It's been like that for I feel like almost a year now."

It's something that Cummings knows so many of us are struggling with right now — how do we exercise the self care we're told that we need when in comparison, the disasters and personal struggles that others are dealing with is so, so much worse? As it turns out, that mentality is exactly what Cummings says made her "sick" and it's why she hopes she can help those her read her memoir. "Am I a narcissist for talking about my stuff? But that's how I got sick in the first place, because I wouldn't take care of myself," she says.

"I wasn't seeking help or going to see doctors or therapists because I was minimizing my own problems and comparing them to those of others, and going like, 'Well I don't have it that bad. Some people have cancer,' or whatever's in the news when whoever reads this," she adds. "I kept martyring myself unnecessarily because I felt guilty for having any kind of problems. I felt self indulgent for even labeling them as problems."

It's difficult, when others are certainly in greater need of charity, compassion, and, quite frankly, help, to focus any attention on oneself — something studies have shown that women, disproportionately struggle with more than men. "The same way that we go on Instagram and compare our lives to other people's greatest hits, we also compare them to their worst hits and comparatively minimize our own stuff. But just because we don't ostensibly have it as bad as someone with cancer or a natural disaster, it doesn't mean that we don't deserve to take care of ourselves and our mental and emotional suffering," offers Cummings.

...for me self-esteem [fluctuates] on a daily basis with social media and this constant need to be seen and loved.

But as she writes in her book, this constant comparison — of not "having it as bad" is how she spent years devaluing herself, getting into hurtful relationships, letting medical problems linger without help, and being what she refers to as "crazy."

"I remember being like 28 and being barefoot on a street on Sunset [Blvd.] with no ride home. I had found myself in yet another ridiculous situation," it was then, she says, that she realized that she wanted to do the work to fix her "crazy." She says she hopes she can convince her readers to take action before they hit a barefoot-on-a-Los-Angeles-thoroughfare moment — not that everyone in need of self-care is going to end up there. In fact, she's hoping none of her readers even come close.

All that said, Cummings knows that by committing to being a little more selfish and focusing more time on yourself, you enter into a balancing act that can feel uncomfortable at first. "It's such a tricky line the difference between self-care and perfectionism. The difference between presenting yourself well at work and being self-flagellating. The difference between being fashionable and keeping up with the trends and being shallow," she says, but she notes that the balance is all in the motives behind the action.

Do you take care of your health by eating better foods because you want your body to be healthy, or because you want your body to fit an arbitrary societal ideal? Do you buy new clothes because you think you'll look the way other people should, or because you love them and you know they'll make you feel like superwoman at work? For Cummings, it comes down to doing things for herself that don't feel like "auditioning for love" from others — something that becomes all that much harder when so much of our time is spent looking at things like Instagram and Twitter, where love either comes or doesn't come in the form of little electronic hearts.

"I'll speak for myself personally, but for me self-esteem [fluctuates] on a daily basis with social media and this constant need to be seen and loved," she says. "It's a f*cking wormhole." In fact, a 2017 study by the Royal Society For Public Health found that the world's second most popular social media platform, with over 500 million users, Instagram, in particular, negatively affected young people's mental health in 14 categories, including body image, self identity, self-expression, anxiety, and depression. Those little hearts may just carry a heavy impact after all.

And in a world where we're constantly tapping into that social media wormhole, along with the never-ending stream of disheartening news, while attempting to live somewhat happy lives and deal with the issues that existed before all that bled into our psyches too, Cummings just might have a point about directing a little more of your attention towards yourself.

"We equate asking for help with being weak, but I actually think it's incredibly brave — f*cking fix it. That's how you get strong and awesome," she says, grabbing at the air as though shaking reason into an imaginary person in front of her. "Life is so f*cking short. If there's something that's bugging you, get ahead of it now, you can't outrun it. It doesn't work. I tried. I promise you it doesn't work."

What she hopes might work, however, is fighting that urge to call working on yourself, and your life, and your well-being "selfish." And if you're already thinking that you don't have it as bad as Cummings or any other human out there, spoiler: She's talking to you.