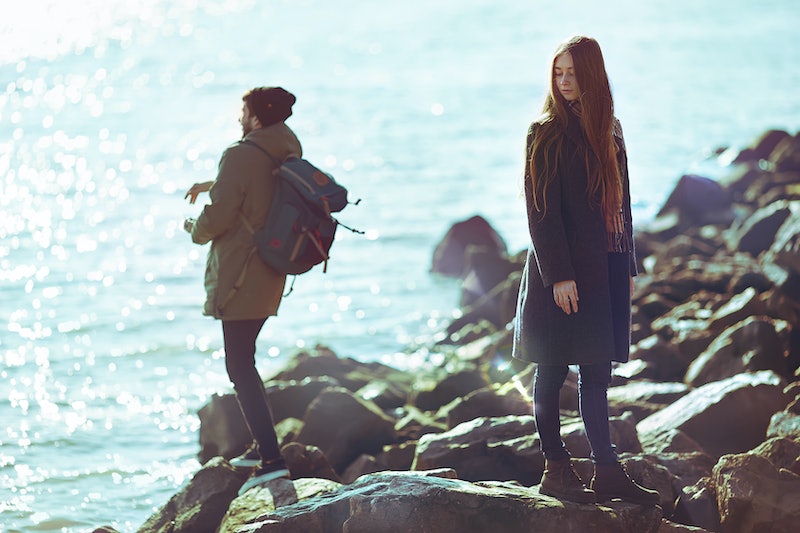 My main piece of relationship advice for my friends is to breakup with someone who is not treating them well — even if they think they person is the love of their life. This, as it were, is irrelevant. “The One” comes back every single time. Here is how.

My partner and I have been together for three years — and about six months in we broke up … only to get back together two weeks later. He had struggled to get me to commit for four months. I was having none of it, as I liked being (mostly) single and free to do whatever I wanted. Finally, he told me he was out if I didn’t make up my mind and settle down. It was the push I needed. I realized I didn’t want to lose him. So, I agreed to be his girlfriend. I went from unsure to crazy for him very quickly — lol, eff me, right? It’s always a scary thing to be that attached to someone. I figured I was safe. He was the one who had come after me, correct?

It turns out that is not always how it works out. As soon as I was hooked, his emotions seemed to cool. He was no longer interested in any form of PDA, insisted I come downtown to see him any time we wanted to hang out, and generally traded in emotional availability for a shiny new set of tepid feelings.

I found myself in a strange place: I liked him a lot. He had been so amazing before. I desperately wanted us to be back in that place again. I wanted him to care. I could feel myself getting desperate, and desperation does not suit anyone. I was falling in love with him, but I wasn’t be treated the way I deserved to be treated. For a few weeks, I put up with this. I told myself everything would get better and he would be into me again (?) if I just stuck it out. That didn’t happen, of course. He continued to hold me at arm’s length as I squirmed.

One morning after too much wine with my girlfriends, I checked my phone and saw he hadn’t texted me back, hadn’t checked in, or called. I looked in the mirror and barely recognized the person looking back at me. What the eff am I doing?

I got dressed, went to work, called him to meet me near my office and dumped him. We called it a “conscious uncoupling” a la Gwyneth Paltrow and Chris Martin. Three days later he was calling me, texting me, and begging me to hang out. I kind of missed him, so, I agreed. We haven’t been apart since. What was weirdest of all was the complete 180 change that happened after breaking up with him. He woke up and realized the best thing that ever happened to him would walk away if she didn’t feel like she was being treated with the respect and love she was entitled to.

TBH, I impressed even myself with this power move. My boyfriend is now obsessed with me and two and half years later, and I’m quite certain he is the person I’ll marry.

Dump The Person You're Dating If They're Not Treating You Right

The point of this story is this: Do *not* stick around in a relationship if you are not being treated well. Here's the thing, if the person you’re dating is “The One,” they will get it together if you make it crystal clear that this crap is not going to fly. It may sound extreme, but it is the only way to make your intentions known. You can threaten to leave someone until you are blue in the face, but it will have no bearing on a person’s behavior.

Obviously, I’m not talking about dumping him or her after every fight — I’m talking about consistent weird behavior. If your partner isn’t changing, leave.

"You should break up with someone if you continue to have the same couples' conflicts and arguments repeatedly and your partner refuses to support satisfying your needs," Dr. Fran Walfish, Beverly Hills child, parenting, and relationship psychotherapist, tells Bustle. "A healthy working relationship requires two willing participates who want to please each other’s wants and needs.

It didn't just work for me. I have given this advice to countless girlfriends and readers, and it works every time.

This Is Tried & True

To be clear, I’m not saying you will get back together every time. The friends who have tried this tactic all swear by it for different reasons — and different outcomes. "A partner can’t meet your needs all the time, but there’s a difference between someone working on their behavior because it’s important to their partner and just temporarily placating them until they can go back to status quo," says Anita Chilpala, dating and relationship expert, and owner of Relationship Reality 312, tells Bustle. "If a person isn’t willing to put in consistent effort after you’ve spoken up, they’re not prioritizing your needs or the relationship."

My best friend broke up with her boyfriend because the only consistency she had in the relationship was homeboy’s inconsistency. He never texted back, never made plans, and was on one about how he was “hurt from his last relationship so he needed to take things slowly.”

After a few months of this crap, I told her to break it off. He was not worth it. A few weeks later, he showed up at a party and has been the model boyfriend ever since. Another friend broke up with her ex, and the girl disappeared forever. Um, good? If you break up with someone and they don’t come back changed, it's time to move on.

I know it sounds pretty terrifying, but the person you wind up with should know what a gem you are. If you let someone walk all over you, they will. If you show them you are Beyoncé, always, that person can either stand up or walk out of your life.

Either way, you win.