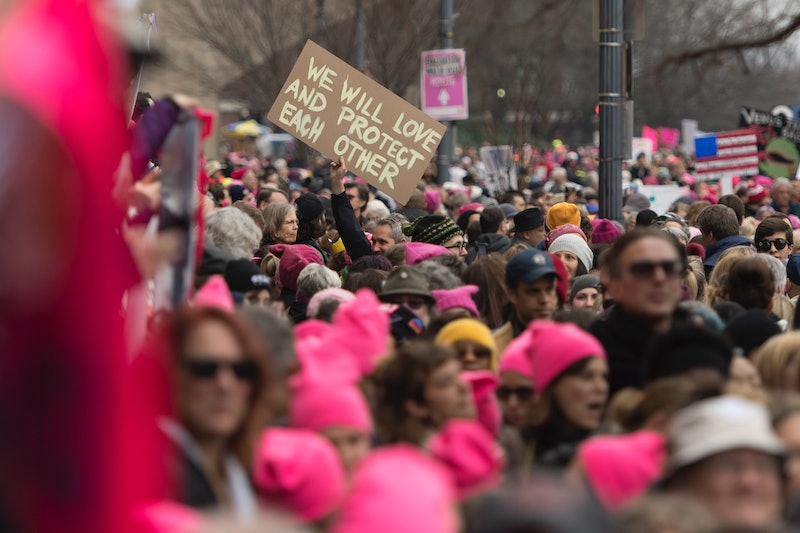 Held the day after what was, perhaps, a disheartening inauguration for the majority of Americans who did not vote for Donald Trump, the Women's March on Washington and its many sister marches were awe-inspiring for many reasons. Turnout was far higher than organizers imagined — early estimates suggest over 2.5 million protesters throughout the world. Despite the masses, not a single person was arrested in Washington, Los Angeles, or Chicago, which makes the day even more impressive and encouraging.

While there were many commonalities to the different marches — "Girls Just Want To Have Fundamental Rights" appeared to be a popular sign in multiple cities — a certain accessory emerged as a trademark of the marches. Images of protests around the world showed that feminists have adopted their own piece of iconic headwear: the pink pussyhat (a play on "pussycat") was a ubiquitous symbol at many of the biggest marches, particularly in Washington D.C. The hats are pink beanies with corners at the top that resemble cat ears when worn. The idea for the hats was spearheaded by the Pussyhat Project, a group that encouraged women to make their own hats or to make hats for others.

Many protesters who attended women's marches around the country intend to do exactly that.

Women's clinic volunteer Madeline Gilje, who attended the march in St. Louis without a pussyhat, plans to knit one to wear in the future. Gilje tells Bustle that she looks forward to wearing the hat in public as a show of feminist solidarity: "Particularly as women, it's easy to feel like we don't have allies when walking the streets, and seeing pussy hats everywhere proves that wrong."

The handmade aspect of the hats is also an important component of its symbolism. To knitter Hollie Daudelin, the hats are a symbol that shows "women are strong, resilient and stick together." Daudelin, who made hats before the New York City march, also tells Bustle that like the march itself, the community at her favorite knitting store is all about women supporting each other:

Women of many ages pop into this store a few times a week, sometimes everyday, and just sit together, support each other, laugh and knit. It's pretty beautiful. Being around that energy after losing the election ... really helped me.

Daudelin tells Bustle she's excited to see women wear pink pussyhats in the future because it shows "you know where your people are."

New York City marcher Cindy Starr tells Bustle that she plans to wear her pink pussy hat throughout the year because she believes it will serve as a physical reminder that Trump lost the popular vote. As Starr says:

I think the new administration has to be constantly reminded that, despite their frequent and blatant lies, they do not have a mandate; they squeaked into office.

Starr says that she plans to wear her handmade pussy hat every chance she gets, "even if it's August."

The pink pussy hats seem to be quickly becoming the unofficial apparel of the anti-Trump movement. They serve as a feminist rebuke to the famous Make America Great Again (MAGA) hats that Trump supporters across the country wear, even after the election, to self-identify.

As Trump and Congress get to work, the political divisions in the United States could not be more clear. On Monday morning alone, the president froze federal hiring and made it much harder for women around the globe to receive safe reproductive care. Over the weekend, White House Press Secretary Sean Spicer gave a bizarre press conference in which he lied to the media, insisting that Trump's inauguration turnout was the "largest audience ever."

Pink hats are obviously not an end in themselves. Trump will still be president, regardless of how many people knit beanies. However, as the creators of the MAGA hat know all too well, there can be power in symbolism.

"Honestly, I've felt powerless for a long time and this last week helped to change that," Gilje tells Bustle. Pulling on a pussy hat is itself a political act, and it's an act with the power to inspire more.