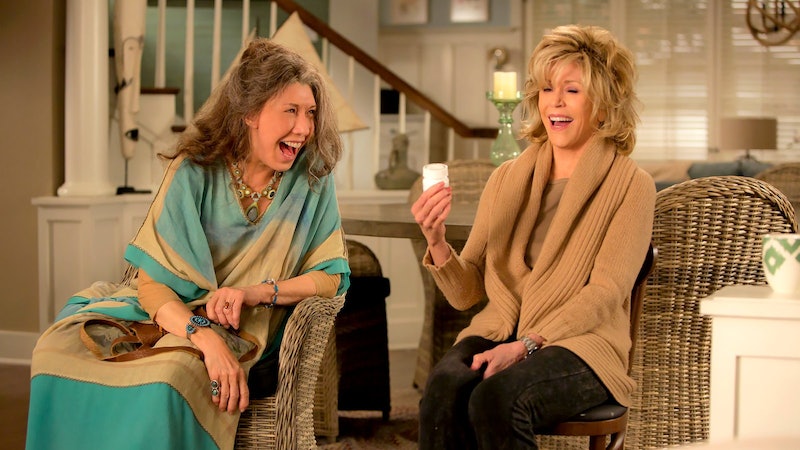 Don't ask me why it has taken me this long to watch Grace & Frankie on Netflix; but, just like with books, sometimes shows find you at the right time. And though I have been scrolling past the show for ages, fully intending to give it a go, I just haven't made the time to watch it. In fact, it was my total lack of Netflix binges over the last year or so (not since I finished the fabulous Miss Fisher's Murder Mysteries last summer) that finally led acting legends Jane Fonda and Lily Tomlin to take over my screen multiple times a day (yeah, when I said binge, I meant it). And I could not be happier that I have finally come to immerse myself in this story.

For those who are unaware, Grace & Frankie follows Grace Hanson and Frankie Bergstein, two women who find out that their husbands are not just work partners, but have also been romantically involved for the last 20 years. Though their lives have been intertwined for decades, they were never quite "friends" and now, despite their already strained relationship, they must try to cope with the circumstances together.

And cope they do; in some of the most hilarious, outrageous, heartwearming and complicated ways possible, redefining friendship, what it means to start over, and the realities of being "a woman of a certain age" in the process. It has been one of the most enriching viewing experiences I've had in the past few years. And it's a show that is so necessary for so many reasons; it's a celebratory moment, making room for women over 50 on the screen when it is still a rarity for older women to be leading ladies in Hollywood. And the characters in this show are not reduced in any way because of their age. They are vibrant and witty and sexually desirable; which makes the jokes about their strained eyesight and memory loss all the more hilarious... because they're laughing with us.

But beyond that, Grace & Frankie has made me think more about stories like this, about women later in life, and how they enrich all of our lives. Just think about shows like The Golden Girls, which have reemerged to be hugely popular in reruns thanks to millennial interest. Why do we love stories about women 40+ years older? Well, I think, it's because these stories show us who we are and who we could be. They teach us that things in our lives are never going to be totally figured out, that we are never going to reach that unattainable perfection so many young women are desperately seeking. And, hell, we may still even be single well into our 70s.

But characters like Grace and Frankie show us that these things don't have to be anxiety-inducing or cringe worthy...and in fact might be just exactly where we need to be. And if I am as resilient, bold and brave in my 70s as they are? I'll consider this whole life thing a huge success. And so I am seeking out more of these stories; not only because it's increasingly important to include all women in our media consumption, to listen to all women tell their unique stories, but because they are beyond inspiring. And, of course, I am looking to my favorite form of media: books.

Here are some of the reads I'm considering for a general TBR:

I still have plenty more research to do, especially when it comes to finding comedic novels about mature women and their friendships; but here's hoping a few of these will give me some of the same feels I get from Grace & Frankie. And, trust me, if you haven't started your series watch, now is definitely the time.