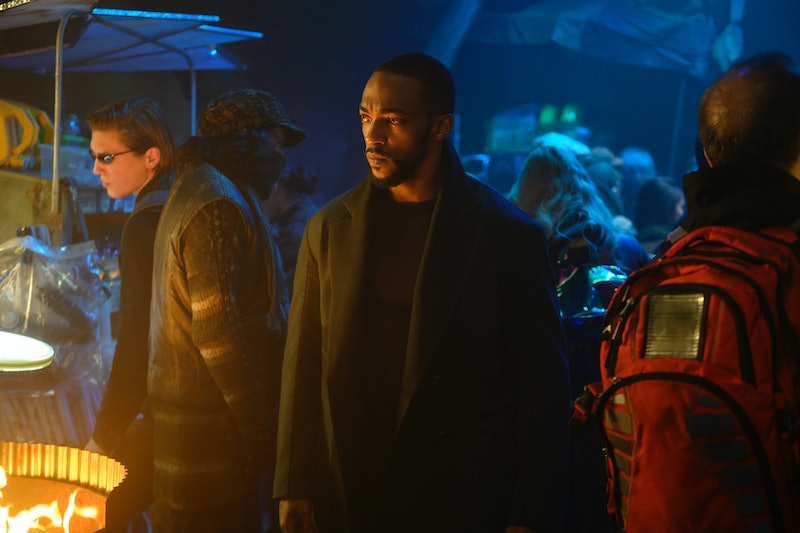 Update: Netflix announced on Aug. 26 that Altered Carbon has been canceled after two seasons.

Earlier: Altered Carbon is all about looking past the physical body to see a person's true soul, and Season 2 continues the tale of digital consciousness by casting Marvel's Anthony Mackie as Takeshi Kovacs, the role formerly played by Joel Kinnaman. We don't yet know if Altered Carbon has been renewed for Season 3, but it sounds like the showrunners would love to explore more of Kovacs' story if given the chance. Based on when the last season was renewed though, fans may have to wait up to six months after Season 2's premiere to hear if Netflix is renewing Altered Carbon.

Altered Carbon is based on a trilogy of sci-fi books by Richard Morgan. Season 1 was a pretty faithful adaptation of the first Altered Carbon book, following the tale of super soldier Kovacs after he's rudely awoken from storage and unwillingly has his consciousness inserted into the "sleeve" (body) of detective Elias Ryker to solve a murder mystery. Season 2 of the show takes more liberties with the story, mixing in plots from both the Broken Angels and Woken Furies sequels. Though this would suggest that there's no more story left to adapt for a third season, showrunner Alison Schapker told The Hollywood Reporter that her and creator Laeta Kalogridis have considered how Kovacs' story could unfold across what sounds like several seasons.

"When I came on board, [creator] Laeta Kalogridis was already mapping out season two," Schapker explained to THR. "The idea was that this was going to be an anthology series but one that also had extensive continuity and rewarded viewers on a season by season basis as far as Takeshi Kovacs' journey ... The goal of Altered Carbon is every season serves a new mystery and a new sleeve and a new planet."

In 2016, Morgan himself also said on his blog that "the longterm aim is to produce at least five seasons of the show, and certainly Broken Angels and Woken Furies are an obvious place to start looking for future material."

If the show were to continue with Kovacs being cast by a different actor every season, that would certainly be in keeping with the spirit of the source material. For example, in Broken Angels, Kovacs and most of the other characters are sleeved in bodies that are Maori or Polynesian in appearance. A future season where an actor like Manu Bennett or even Jason Momoa takes on portraying Kovacs would be intriguing, all while staying true to Morgan's established canon.

Alternatively, there's moments in the series where Kovacs is sleeved in the body of a woman, and the books explore how that changes how he moves through the world. Is it possible a future season could explore that delicately with a female protagonist, especially considering Altered Carbon has two women at the helm? Altered Carbon has already rewritten key stories to give expanded roles to the women in the show over their book counterparts, so perhaps there's an opportunity to make future Altered Carbon seasons even more diverse and women-centric.

More like this
Watch The Thrilling Teaser Trailer Of 'Shadow And Bone' Season 2
By Gretchen Smail, Jack Irvin and Sophie McEvoy
Mike Flanagan Teases 'The Midnight Club' In This Exclusive, Creepy Clip
By Grace Wehniainen
'Heartstopper' S2 Just Welcomed Four Brand New Cast Members
By Nola Ojomu and Sam Ramsden
'Elite' Season 6 Is Arriving Sooner Than You Think
By Gretchen Smail and Grace Wehniainen
Get Even More From Bustle — Sign Up For The Newsletter