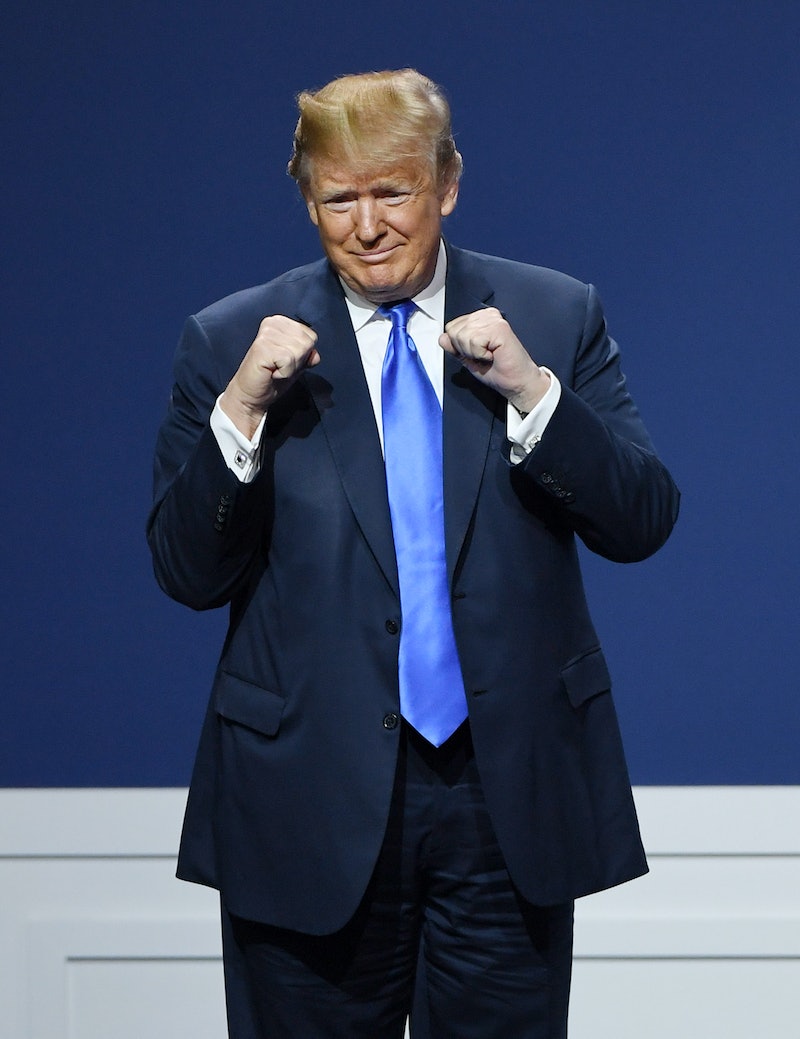 The 2020 election is still a year and a half away, but already the Democratic field of contenders is well over a baker's dozen. But while Republicans brought 17 candidates to the 2016 presidential primaries, there haven't been many RSVPs to challenge President Donald Trump in 2020. In fact, while there's been some rumblings of a primary showdown, it's still unclear if any Republican will actually challenge Trump in 2020 at this time.

So far, three people have mentioned maybe, possibly, if everything felt right, running against Trump in the Republican Party's 2020 primary. They include former Massachusetts Gov. Bill Weld, Maryland Gov. Larry Hogan, and former Ohio Gov. John Kasich. None of the men have, however, fully or formally tossed their hats into the ring.

Weld launched a presidential exploratory committee in February but has not officially launched a campaign. In March, Hogan told The Washington Post that he was still undecided and may refrain from making a decision about the 2020 election until the fall when investigations into Trump are expected to have concluded. Kasich has also said that he remains undecided, telling a crowd at SXSW last month that he didn't know what he was going to do. "Right now, today, inside the Republican Party, I can't beat him in a primary," Fox 8 reported Kasich said of Trump. "But we'll see. That's today."

Although it's rare for sitting presidents to face primary challengers, it's not unheard of. It happened most recently to George H. W. Bush in 1992, to Jimmy Carter in 1980, and to Gerald Ford in 1976. According to Business Insider, all three of those incumbent presidents went on to loose their re-election bids.

That being said, amid chatter of potential Republican primary challengers, the Republican National Committee (RNC) moved to send a message of "undivided support" for Trump to party members earlier this year. In January, the committee unanimously voted to give Trump its "undivided support" ahead of the 2020 presidential election.

"President Donald Trump has made gains which have benefited Americans no matter their ethnicity, race or persuasion, with a new message of hope, opportunity, prosperity, and national security that has already improved the lives of millions of people," The Washington Post quoted the RNC's resolution of undivided support as having read. According to the paper, the resolution also praised Trump as a "pragmatic, energized President who shares and understands the will of the American people."

Trump celebrated the resolution on Twitter, thanking the RNC for its support and suggesting the 2020 race would be a breeze. "Considering that we have done more than any Administration in the first two years, this should be easy," he tweeted. "More great things now in the works!"

It's worth noting, however, that the RNC's resolution falls short of being an official endorsement of a Trump 2020 campaign. In fact, it was largely a symbolic gesture — a buoy tossed to Trump at a time when the longest government shutdown in U.S. history threatened to completely sink his approval rating. Still, it remains unclear if anyone within the GOP actually will opt to challenge Trump for the party's nomination in 2020.