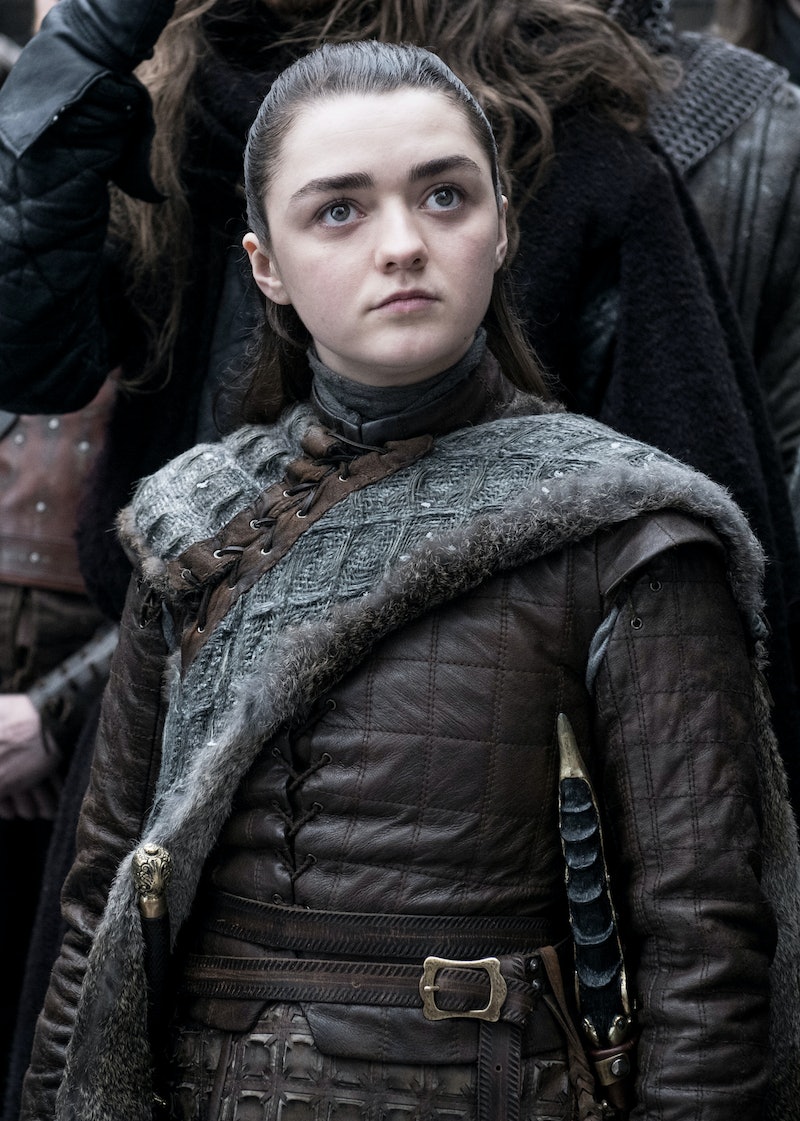 Since she serves the Many-Faced God, Arya Stark (Maisie Williams) is eager to put her impressive swordsmanship to good use. While she murdered Walder Frey in Season 7 for assassinating her mother and brother and killed the Night King during the Battle of Winterfell, there are a few other people she's hoping to cross. Enemy number one is the Queen of the Seven Kingdoms, Cersei Lannister. But whether or not Arya kills Cersei on Game of Thrones, they'll likely have a reunion at some point during Season 8. And it's bound to be uncomfortable.

But first, a quick refresher on why Arya hates Cersei so much. After Robert Baratheon died in a hunting "accident" in Season 1, Cersei had Arya's father, Eddard Stark, arrested. See, Ned had figured out who her children's true father was, and it wasn't King Robert. In other words, he realized she'd been sleeping with her brother, which The Seven doesn't exactly smile down at (which Cersei learns all too well in Season 5 during her legendary walk of shame).

However, this wasn't the first person Cersei had killed for discovering her relationship with Jaime. Bran Stark narrowly escaped death in the pilot after Jaime pushed him out the window at Winterfell, Robert Baratheon's former hand, Jon Arryn, was murdered for discovering their secret, and finally Joffrey had Ned Stark beheaded. So while Cersei didn't kill Ned herself, she was the one who arrested him, so she's certainly complicit.

And Arya has been training for this moment since her father was decapitated all those years ago, so if Cersei doesn't have any backup (the Mountain, perhaps), then the Queen Regent is dead meat. That said, the Lannister has a habit of constantly surrounding herself with protection — especially now that she sits on the Iron Throne.

And this reunion is certainly a possibility, as Game of Thrones actor Sophie Turner told The Wrap. "Cersei is on Arya's list, so I would love to see Sansa and Arya team up against Cersei," she said, coyly. "But who knows, man. Who knows." But whether or not Arya is the one to do the deed, most audiences seem to agree that Cersei is going to die in Game of Thrones Season 8.

This is mostly due to a prophecy that the Lannister was given by a witch named Maggy the Frog. The witch foreshadowed that Cersei would have three children, all of whom would die (so far, so true). "And when your tears have drowned you, the valonqar shall wrap his hands about your pale white throat and choke the life from you," Maggy told the future queen.

According to A Wiki of Ice and Fire, "valonqar" is High Valyrian for little brother, so it stands to reason that Cersei will be murdered by one of her siblings. And while Tyrion is Cersei's younger sibling, so is Jaime, since she was technically born before him. As a result, her brother-and-lover could also be the one to "choke the life" from her, which would be both satisfying and difficult to watch. Furthermore, choking isn't really Arya's style — she prefers her beloved Needle.

That said, we saw firsthand how Arya killed the Night King during the Battle of Winterfell. And if she can murder a White Walker that easily, then Cersei doesn't stand a chance against the Stark. And while we don't know what the Lannister has planned, it seems unlikely that she and Euron's army would be able to defeat the Unsullied, Dany's dragons, the Night's Watch, and the Wildings — even if their numbers were depleted during the April 28 showdown.

Melisandre also dropped a huge hint that Arya would be the one to kill Cersei before the witch died in Season 8, Episode 3. "You said I'd shut many eyes forever," Arya told the Red Woman. "You were right about that, too." She responded, "Brown eyes, green eyes, and blue eyes." Blue eyes likely refers to White Walkers, so who are the brown and green eyes? As many fans pointed out, including aytiti10892 on Reddit, Walder Frey had brown eyes, whom she killed in Season 7, and Cersei has green eyes.

While it's difficult to determine anyone's eye color in the show, A Song of Ice and Fire gives a bit more clarity. In Chapter 5 of the first book, A Game of Thrones, Cersei is described as "tall and golden, with flashing green eyes and a smile that cut like a knife." That said, her other siblings also share the same eye color — while Tyrion is described in the books as having black and green eyes, Jaime's eyes are also green. So could Arya be fated to kill Jaime, instead?

Prophesies aside, it's clear that Cersei isn't a warrior and constantly surrounds herself with protection. But since The Mountain is on Arya's list, too, maybe she can kill two enemies with one fell swoop. But whether Arya will ever get the chance to avenge her father's death or not, it's now or never. But if they do get their long-awaited reunion, Arya will no doubt stick Cersei with the pointy end.