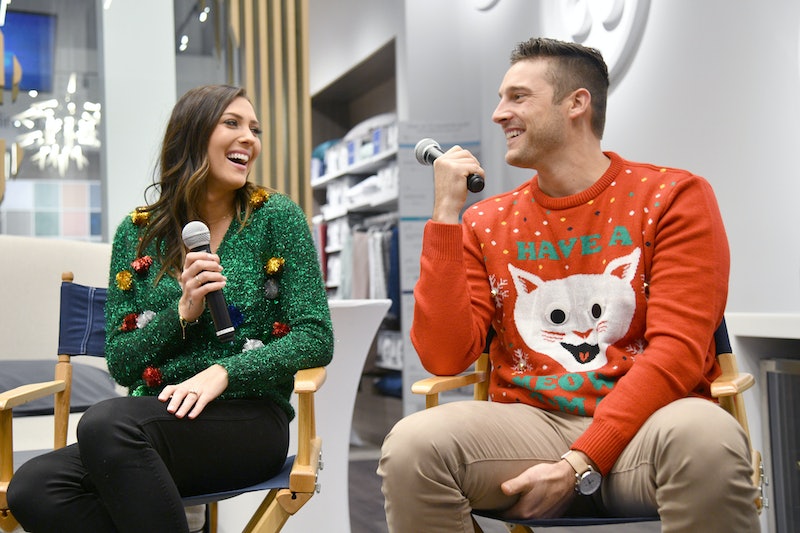 Becca Kufrin and Garrett Yrigoyen have weathered the post-Bachelorette whirlwind pretty well so far, and as Becca prepares to pass the torch to Hannah B., they seem happier than ever. But while the couple is still going strong, Becca and Garrett probably won't get married in 2019. In fact, their wedding may be a long way off if they have anything to say about it. (So don't ask, Chris Harrison, OK?)

In December 2018, Becca said they weren't even close to planning their nuptials, telling Us Weekly they had "no dates, no months, [and] no venue." Garrett echoed that statement, offering only loose plans. "I would say [we'll get married in the] fall of whatever year we choose because she loves the fall," he said.

The couple does, however, know one other thing for sure. "The only thing that we've talked about that we want are food trucks," Becca continued to Us Weekly. "I want a great taco truck and a ton of Skee-Ball machines so everyone can just play games." This is a woman who knows her priorities.

Around the time of that interview, Becca and Garrett did a dreamy wedding photoshoot that, for a short time, had the internet convinced they may have secretly eloped. In actuality, it was just that —a photoshoot — but hey, it was good promo. Kudos to that brand, because everyone saw those clothes.

As for whether or not Becca and Garrett's wedding, whenever there is one, will be on TV, they haven't decided. "We don't know," Becca told Us Weekly. "I think right now my mom would kill me if I did anything more on TV. She's like, 'Just take a break from it all.'" I think we'll cross that bridge when it comes." You gotta listen to Mom on this one, Becca — take some time for yourselves.

But while an actual wedding is still a ways away, the couple is definitely taking one big step: they're moving in together. In the beginning of 2019, Becca told People that she and Garrett were house-hunting in San Diego. "His brother lives just north of there," she explained.

In all seriousness, it's totally reasonable that Becca and Garrett are taking things slow. They met each other just over a year ago and haven't been engaged very long — on top of, you know, getting engaged after eight weeks of being on a television show together. In fact, they only celebrated their one-year anniversary in March — though they may have their eye on another milestone soon.

"You had my heart since the very beginning, and I love and value you so much. Thank you for this past year, thank you for simply being you. Now let's get a puppy for that mini van already!" Becca captioned her anniversary post to Garrett.

A new house and a new dog? Sounds like they'll have their hands tied for the foreseeable future. They'll walk down the aisle someday, but for now, that someday is far off.

More like this
So... When Are Gabby & Erich Getting Married?
By Kadin Burnett
Clayton & Susie Broke Up, Citing "A Significant Amount Of Pain" After 'The Bachelor'
By Jordyn Tilchen
'The Bachelor's Peter Weber & Kelley Flanagan Are Reportedly Back Together
By Grace Wehniainen
Bachelorette Gabby Kissed Her New Fiancé On 'Dancing With The Stars'
By Jake Viswanath
Get Even More From Bustle — Sign Up For The Newsletter