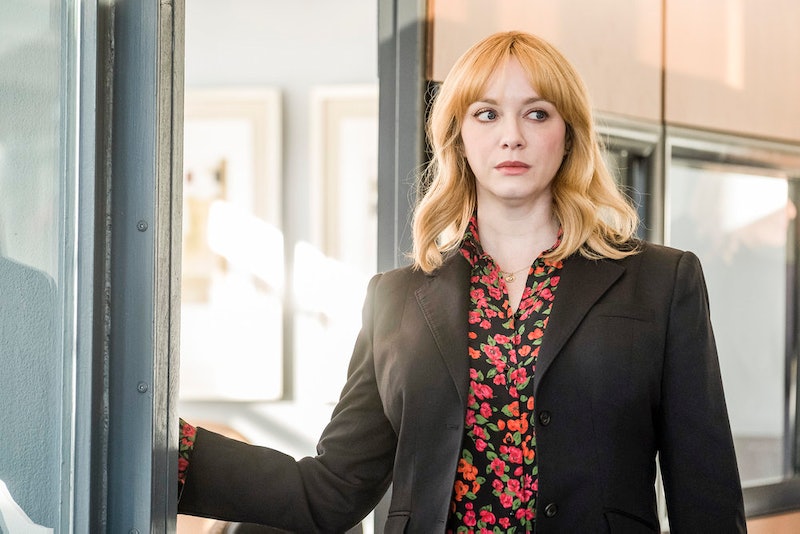 Spoilers ahead for Good Girls Season 2, Episode 10. Every week the FBI gets one step closer to arresting Beth on Good Girls. But it wasn't clear in the May 5 episode if Agent Turner found the evidence he was looking for to catch Beth once and for all. However, the episode synopses for the next two episodes hint that Beth is safe — for now, at least.

Noah used the information Annie told him (Annie, why?) to set up a sting operation at Beth's dealership. But when the FBI got there, no evidence of wrongdoing could be found. That's because Beth had flushed as many of her "book club" records down the toilet as she could before Turner busted in. She hid what papers remained in the ceiling, which Tuner eventually figured out, but it wasn't clear if they were still there by then, or if someone had a chance to sneak in and move them.

There looked to possibly be a flutter of a paper when he initially pushed up the tile, but the scene was so dark it wasn't clear if that was just part of the ceiling or if it was the un-flushed records. The black binder couldn't be seen in the dark ceiling scene at all — so even if it was there, it wasn't necessarily noticeable to viewers. (Or, perhaps she threw it down the shaft so it wasn't noticeable right at the entrance?)

Beth was looking in the mirror just before ditching the binder, so maybe she saw the same hiding spot that Agent Turner did. But she came out of that bathroom awfully quickly to have stood on a trash can, lifted a ceiling tile, hidden the papers, gotten down, turned the trashcan upright again, and come out seconds later. Beth is smart, and she's unlikely to make a mistake that gets her caught. The only reason the FBI even had the intel they did is because Annie blabbed it. If Beth goes down, it will likely be because of Ruby or Annie — not herself.

But it doesn't look like the FBI will take her down just yet. The next two episode descriptions don't even mention the FBI or Agent Turner. Here's what's coming up in the May 12 episode:

"Rio uses a series of unnerving tactics to remind Beth that it's not as easy to walk away from his criminal enterprise as she'd like it to be. Meanwhile, Annie learns something new about Noah and Ruby makes a reckless decision to save Stan."

If Beth is in danger of anything, it's dealing with the wrath of Rio. But it's not like he wants his main distributor to go to prison, so he's not likely to let her take a fall or anything.

Then, the May 19 episode synopsis says:

"Mary Pat resurfaces in the women's lives as they try to make sense of a shocking discovery Beth has made. Meanwhile, Beth and Dean have an important family talk with the kids, and Annie and Noah try to work through their problems."

If Noah and Annie are trying to work things out, it's unlikely that the FBI has taken down Beth. Annie would probably not want to be in bed with one of the agents imprisoning her sister. Plus, if Dean and Beth have time for a family talk, there's no way the FBI has her in custody.

Agent Turner doesn't seem to have found (yet) what he needs to arrest Beth, but he could soon. Executive producer Jenna Bans told Variety that the back half of Season 2 would really deal with the police threat to the women. "The consequences do begin to mount in a serious way, plot-wise and emotionally," Bans said. "They start to feel the consequences and from the police point of view, they start feeling the heat."

The women have already begun to feel that heat, so maybe that's as far as Season 2 goes. After all, the show was just renewed for a third season. It wouldn't be that entertaining for viewers if Beth had to spend it all in prison. Even if Beth does find herself getting caught down the road, she (or Rio, Ruby, and Annie) will likely find a way out. Beth is at her best when she's free to run her illegal businesses and be a mom — jail just doesn't seem like it's in the cards for her at this point.

More like this
'House of The Dragon' Episode 6 Will Take Place A Decade After Episode 5
By Kadin Burnett
The First Clip From Netflix’s Queen Charlotte ‘Bridgerton’ Prequel
By Bustle Editors
The ‘Emily In Paris’ Season 3 Release Date Is Here, Plus The First Footage
By Bustle Staff
The ‘You’ Season 4 First Look Shows Joe’s New Identity And Potential Victims
By Bustle Editors
Get Even More From Bustle — Sign Up For The Newsletter