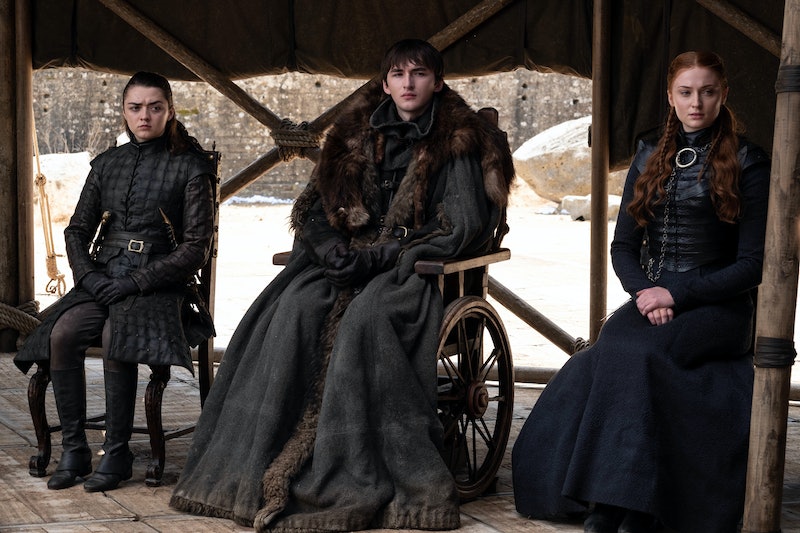 Spoilers ahead for the series finale of Game of Thrones. While the final episode of Game of Thrones seemed to wrap up many of the saga's loose ends, there is still one mystery left to solve: the question of what happened to Drogon after Dany's death. However, in one of the show's last scenes, Bran implied that he was searching for Dany's dragon.

After Jon (Kit Harington) killed Daenerys (Emilia Clarke) in front of the Iron Throne, her sole surviving dragon, Drogon, scooped up her body and flew off into the sunset with her, after destroying the Iron Throne. Drogon's heartbreak was completely understandable — after all, Dany was the Mother of Dragons, who raised him and his siblings after they hatched from their eggs. And while the threat from the Targaryen family and the Unsullied seemed to disappear after Bran (Isaac Hempstead-Wright) was named the new King of Westeros, there is still the looming threat of Drogon hovering over the events of the finale, as nobody seems to be sure of where he went while mourning his mother's death.

During Bran's first meeting with his cabinet, it's casually mentioned that Drogon has been spotted, though it seems as if he's still nowhere near Westeros, and thus, not a current threat. Still, Bran suggests that he might be able to help find the missing dragon, implying that he should be able to track Drogon, thanks to his warging abilities.

While fans were sadly not given a glimpse of Bran warging into Drogon's mind and seeing the world through his eyes, it does seem reasonable that the Three-Eyed Raven himself would be able to track the sole remaining dragon in the world thanks to his abilities. It's unlikely that Bran will use Drogon to fight any battles in the future — after all, that has often ended badly for him in the past — but the ability to see through other creatures' eyes is an incredibly useful one for the king to have, as he'll be able to keep an eye on this threat without having to send any of his men out to face down a dragon.

In addition to letting fans know that Drogon is still alive at the end of the series, Bran's comment also highlights the benefits of having the Three-Eyed Raven as the King of Westeros. He is able to see all of his Six Kingdoms, which is an advantage over some of his predecessors who have previously noted that the realm is incredibly large, which makes it difficult to be aware of every little thing that's happening at any time. Bran also theoretically knows everything that has and will happen in the Six Kingdoms, which gives him the ability to make decisions that will make the most sense for the future of Westeros.

Of course, being the Three-Eyed Raven is still Bran's main purpose; though he's now the king, he seems content to let his advisers make a lot of the day-today decisions on how to run things. Still, if his comment in the finale is any indication, even if he hasn't completely mastered his abilities, Bran is a king unlike any other that Westeros has ever seen.

More like this
Alicent's Green Dress In 'House Of The Dragon' May Be An Act Of War
By Kadin Burnett
Nicola Coughlan Shared A Lady Whistledown Excerpt From ‘Bridgerton’ Season 3
By Grace Wehniainen, Alyssa Lapid and Sam Ramsden
'House of The Dragon' Episode 6 Will Take Place A Decade After Episode 5
By Kadin Burnett
These Memes & Tweets About Alicent in 'House Of The Dragon' Prove She's The Queen Of Messiness
By Grace Wehniainen
Get Even More From Bustle — Sign Up For The Newsletter