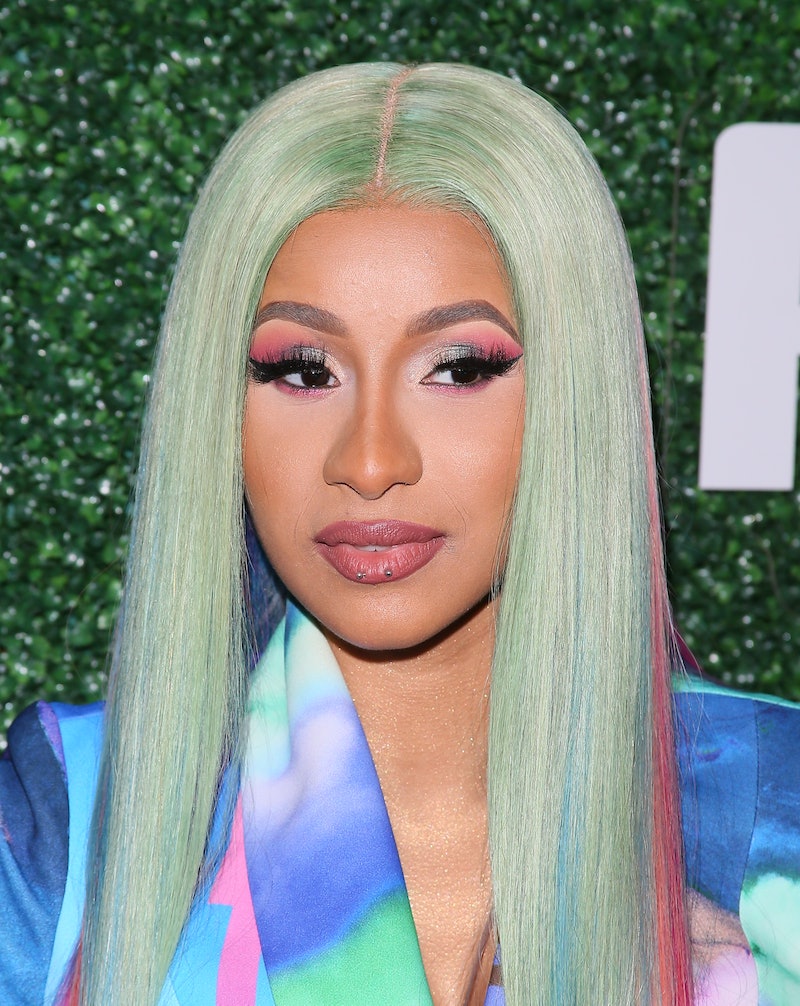 Come May 1, some of the biggest names in music will come together for the Billboard Music Awards. One of the stars that everyone wants to see is Cardi B, who has pretty much dominated the music scene since she released "Bodak Yellow" in 2017. She's given fans many a memorable award show moment, but will Cardi B be at the 2019 Billboard Music Awards? She hasn't confirmed anything herself, but given that she's up for almost two dozen awards, it's likely she'll make an appearance to collect a few wins.

Per Billboard, Cardi B is leads the 2019 nominations with 21 nods in 18 categories, including Top Artist, Top Female Artist, Top Rap Album, and Top Rap Artist. She's actually nominated twice in three categories – Top Hot 100 song, Top Selling Song, and Top Collaboration – which means there's a pretty strong chance that she''ll nab a few wins this year. Her double nominations in those categories seem like fate considering the lyrics to her song "Best Life," in which she says "I'm my own competition, I'm competing with myself." Plus, Cardi missed the 2018 Billboard Music Awards for undisclosed reasons, so this would be the perfect time to makeup for it.

She's not on the star-packed list of performers for the night, but that might be because Cardi has been so busy lately. According to her Instagram, she just returned from a show in Baku, Azerbaijan, which is a small country located between Eastern Europe and Asia, and is pretty exhausted from her epic show and experience in a new place. This may be why she didn’t have enough time (or energy) to turn around and perform on the BBMAs stage just days later. But surely nothing will keep Cardi from showing up as the frontrunner of this year's nominees.

So far, she hasn't tweeted or posted anything about making an appearance at the BBMAs, but perhaps she's keeping it all under wraps for some kind of epic surprise. If Cardi B does come to the Billboard Awards, fans can expect eye-catching red carpet looks, hilariously real interviews, and heartfelt acceptance speeches like the emotional one she gave while accepting Best Rap Album at the Grammys earlier this year.

"I want to thank my daughter Kulture...I'm not just saying thank you because she's my daughter. It's because, you know, when I found out I was pregnant, my album was not complete. I had, like, three songs I was for sure having. And then you know how it was: We was like, We have to get this album done so I could shoot these videos while I'm still not showing. And it was very long nights," she said at the time, going on to thank her husband, Offset. "He was like, you're going to do this album, girl. We're gonna have this baby, and we're gonna make this album," she continued.

That marked a huge night for Cardi, who became the second ever woman to win a Grammy for Best Rap Album, but the BBMAs should be just as epic. Hopefully, she'll show up to soak in the excitement.

More like this
Everything To Know About Taylor Swift’s 10th Studio Album, 'Midnights'
By Grace Wehniainen and Jake Viswanath
Twitter Is Freaking Out Over Rihanna’s 2023 Super Bowl Halftime Show Announcement
By Stephanie Topacio Long
Kanye West Apologizes To Kim K "For Any Stress I Have Caused" In Rare Interview
By Jake Viswanath
Jason Derulo Is Launching A New Singing Show In The UK
By Maxine Harrison
Get Even More From Bustle — Sign Up For The Newsletter