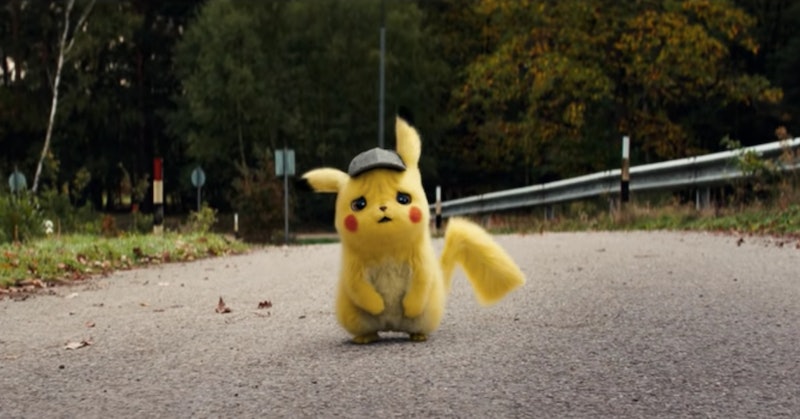 With the anticipated release of Pokémon Detective Pikachu nearly upon us — the film officially comes out May 10 — it's amazing to think back and realize it's not a fever dream; we truly live in a world where a CGI/live action hybrid film featuring Japan's most popular electric rodent, as voiced by People magazine's 2010 Sexiest Man Of The Year (Ryan Reynolds) is really making it to the big screen. The hype around the film's been intense since it was announced, and now that it's about to drop, Poké-stans are already asking, will Detective Pikachu get a sequel? Good news for filmgoers who already want to catch 'em all: it's already in the works.

Back in January 2019, The Hollywood Reporter reported that Legend Entertainment was already working on an official sequel to Detective Pikachu, with 22 Jump Street and The Cloverfield Paradox writer Oren Uziel working on the script. He's also the writer behind the new Sonic The Hedgehog film adaptation, which director Jeff Fowler announced over Twitter would be put on hold for character redesign after the internet responded negatively to Sonic's look in the first trailer. While that doesn't have anything to do with the script quality, Hollywood is a fickle friend, and a lot could change between now and the next Detective Pikachu.

Still, the fact that it's even in the works already speaks to the expectations for this first movie. Pokémon is an established, worldwide brand, so the adaptation isn't particularly risky, and per Forbes, Detective Pikachu is projected to pull in $50 million in its first weekend. Even with the early start, fans likely shouldn't expect to see the potential sequel until 2022 at least.

The odds of Detective Pikachu 2 not making it at all seem slim, especially since in addition to a sequel, rumors that a spinoff and similarly-inspired Pokémon movies are in the works are already cropping up. We Got This Covered claims that not only are plans underway for a spinoff of the fuzzy detective focusing on the rumored villain of Detective Pikachu (click through if you'd prefer spoilers), but that additional films based on early Pokémon games Red and Blue are in the works. So far, neither Legendary nor Warner Bros. has confirmed or denied anything beyond the sequel and its scriptwriter.

And delays could happen for any number of weird reasons beyond the normal ones. Detective Pikachu director Rob Letterman told IGN he had to wait two years to get permission from the President of the Pokémon Corporation himself to put Mr. Mime in the interrogation scene glimpsed in the trailer. Another snag could be that Ryan Reynolds' schedule fills up between now and then with additional Deadpool sequels and/or other project. There's no word from the actor or Warner Bros. that he's officially in as the voice of Pikachu for more films, but would they really cast anyone else? The combo of this fuzzy lil' guy and Reynolds' voice is what made the trailer go viral in the first place!

More like this
Lin-Manuel Miranda & Tituss Burgess React To 'Little Mermaid' Casting Backlash
By Radhika Menon
Nicola Coughlan Shared A Lady Whistledown Excerpt From ‘Bridgerton’ Season 3
By Grace Wehniainen, Alyssa Lapid and Sam Ramsden
Margot Robbie Breaks Her Silence On *That* Viral 'Barbie' Moment
By Maxine Harrison
12 ’90s Movie References You Missed In 'Do Revenge'
By Radhika Menon
Get Even More From Bustle — Sign Up For The Newsletter