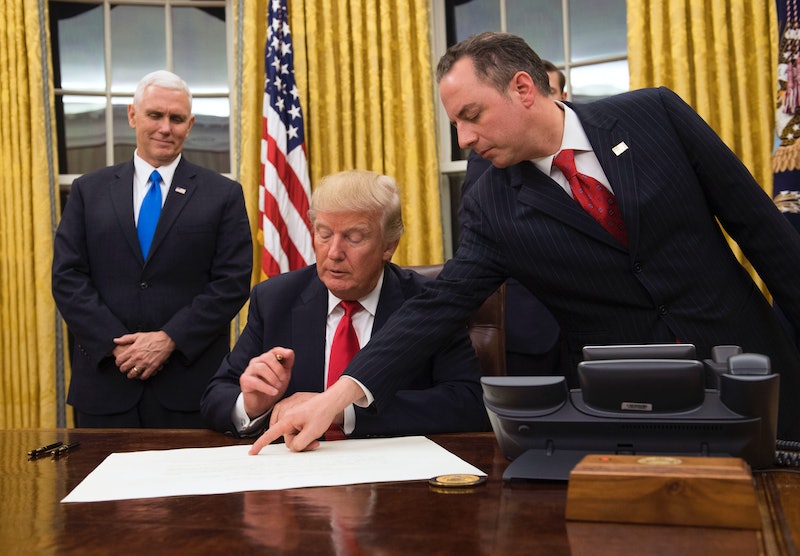 Title X is a law that provides funding for comprehensive family planning services to low income families. Indeed, each year millions of Americans use services provided by Title X funding. However, given the Trump administration's recent anti-choice actions, some are wondering if Donald Trump will get rid of Title X. While anything is certainly possible due to the unpredictability of the Trump administration, a repeal of Title X seems unlikely.

Title X was first enacted under the Nixon administration in 1970 as part of a larger Public Health Service Act. According to NARAL, Title X "is the only federal program exclusively dedicated to family planning and reproductive-health services." Title X allows families access to preventative services, contraception, and treatment for STDs, among other services. However, it is illegal for Title X funds to be used for abortion services.

While the possibility for new guidance around the implementation of Title X exists, I believe that the Trump administration is probably unlikely to focus its attention on Title X, at least in the near future. I particularly think this is the case because Title X already prohibits federal funding from being used for abortion. Since provision of abortion rather than family planning services seems to be what provokes most counteraction from the Republicans, Title X's already-existent ban on abortions makes it less likely to become an issue.

Furthermore, Title X seems to have fairly broad bipartisan support among American adults, making efforts to repeal it somewhat unlikely. According to new polling data from the National Campaign to Prevent Teen and Unplanned Pregnancy, "75% of adults (including 66% of Republicans and 84% of Democrats) favor continuing the Title X Program."

However, that being said, Title X could become controversial for one reason. Former President Obama enacted Title X guidance shortly before he left office, requiring states to give Title X funds to Planned Parenthood (which performs abortion services, but not with Title X funds). Seeing as the GOP targeted Planned Parenthood before Trump even took office, there's a slim possibility it may do the same to Title X.

Only time will tell whether the repeal of Title X constitutes a priority for Trump and the Republican party. However, its already-in-place ban on federal abortion funding coupled with its bipartisan support will render the likelihood of initiating repeal efforts quite low.