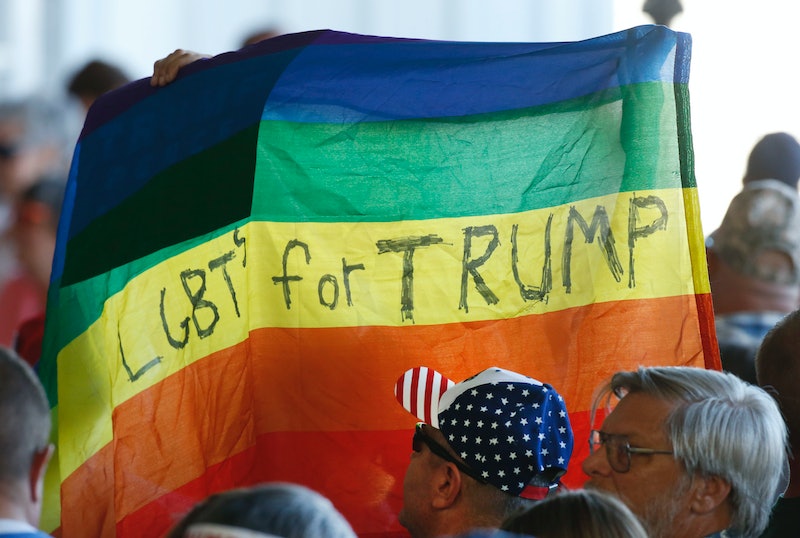 For many in the LGBTQ community, there is real fear about the coming Donald Trump presidency. It's been under two years since the Supreme Court declared same-sex marriages must be legalized recognized across the country with Obergefell v. Hodges, and those who fought for it surely don't want to move backwards. Some are worried, though, if Trump could rollback same-sex marriage protections that have been in place for such a relatively short time.

Trump has left same-sex marriage supporters confused about his positions on the issue. During the campaign, Trump told Fox News' Chris Wallace he would appoint judges who oppose same-sex marriage. But shortly after becoming president, he told CBS' Leslie Stahl, "I mean it’s done … these cases have gone to the Supreme Court. They’ve been settled. And I’m fine with that.”

While running for president, Trump occasionally broke with Republican orthodoxy by embracing the LGBTQ community, especially through his claims after the Orlando Pulse nightclub attack that restrictions on Muslim immigration would protect them (a sentiment largely rejected by LGBTQ leaders).

On the other hand, Trump frequently embraced anti-LGBTQ groups. He appeared alongside high-profile leaders of the Christian Right at the Values Voters Summit in September, and his Vice President, Mike Pence, has been a long-time opponent of LGBTQ rights.

Like with many issues, Trump seems all over the map. At the very least, Trump will probably be a break from the Obama administration's active pursuit of expanded rights and privileges for LGBTQ Americans. With issues like discrimination protections based on sexual orientation and/or gender identity, the fights of the LGBTQ community are certainly not over.

But I think there's reason to actually take Trump's comments to Stahl on 60 Minutes more seriously than his others. It's not because I think they more accurately show what's truly in Trump's heart. But Trump's assessment that the same-sex marriage issue is "settled" should be listened to, because, simply, he's right.

It takes a lot to overturn a Supreme Court decision. Obergefell v. Hodges, the 2015 case that led to the Court legalizing same-sex marriage nationwide could only be overruled by either a) a constitutional amendment banning same-sex marriage, or b) a new court case that overturned the decision. The first option is incredibly unlikely. A Constitutional amendment would have to be passed by two-thirds (38) of the states. Considering that 36 states had already legalized same-sex marriage in advance of the 2015 Supreme Court decision and as of May 2016, Americans support it by a margin of 57-35, according to surveys by the Pew Research Center.

So how likely is the other option? Well, not very, even if Trump gets the chance to nominate the most conservative justices in the history of the court (which itself isn't particularly likely — Supreme Court appointments have to be approved by the Senate, which has a slim Republican majority of 52 seats, and are subject to a potential filibuster). The American legal system tends to abide by the principle of stare decisis, which defers to previous decisions. For a case to challenge an established court decision, it has to prove that the previous decision is causing damage, and a plaintiff must be found with standing — a stake in the issue that the court must protect. For a case to make it to any court, someone would have to prove that they're directly harmed by same-sex couples getting married. For comparison, the 1967 case Loving v. Virginia legalized interracial marriage, and the five decades since have not seen any serious challenge.

This does not mean that LGTBQ issues won't need advocates during the Trump administration. But on the fundamental issue of whether same-sex love is legal, things are probably "settled."

More like this
An Honest Review of MeUndies Boxers, According To A Non-Binary Person
By Megan Lasher
The 19 Best Tweets & Memes About Bisexual Awareness Week
By Lexi Inks
Pro Footballer Zander Murray Is "Blown Away" By Support After Coming Out
By Sam Ramsden
Mel B Speaks Out Against Domestic Violence In A Powerful Speech
By Sophie McEvoy
Get Even More From Bustle — Sign Up For The Newsletter