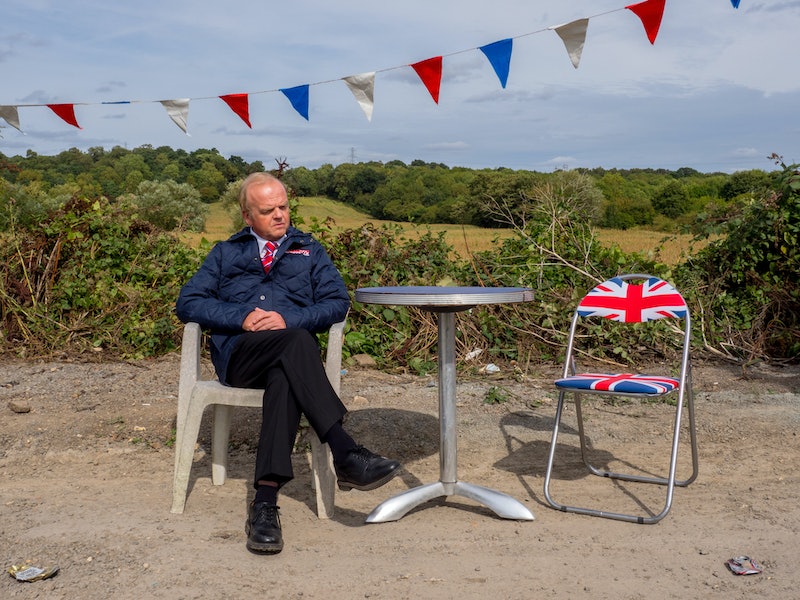 The sleepy seaside town of Bognor Regis might not seem like the ideal setting for BBC's politically charged comedy Don't Forget The Driver. But when it comes to the very relevant, and somewhat disheartening, themes of the show, a location on the southern coast in the UK makes perfect sense. The new six-part series, which first aired on BBC 2 back in April, is set to the backdrop of Brexit and migration in the UK. But will 'Don't Forget The Driver' return for season 2?

The 6th and final episode of season one airs tonight (May 14 2019) on BBC 2, and it's unclear yet as to whether Don't Forget The Driver will be returning back to our screens for a second round. Representatives from the BBC have told Bustle there is no "news on season 2" just yet, but fingers crossed as it's already got the nation laughing, while contemplating some of the sad truths of our current political climate.

The dark comedy was co-written by Golden Globe nominee Toby Jones, who — most importantly IMO — was the voice of Dobby in the Harry Potter films. He and playwright Tim Crouch got the idea to set it in Bognor Regis as it's Crouch's hometown.

The story follows coach driver Peter Green (played by Jones) as he manages being a single father who is estranged from his daughter's mother. At the beginning of the season, Green discovers a body washed up on the beach, and the storyline unfolds from there.

Jones is adamant the show is more about Bognor then it is about Brexit, in fact the words "Brexit", "migrant" and "refugee" aren't even mentioned in the series, the actor pointed out in a recent interview with BBC 2. Speaking to Radio Times, Jone said:

"Why would you want to see another thing about Brexit? That’s not what it’s about, it’s about Bognor … Bognor’s like any town if you look at it now, there’s lots of things going on in the town, on the street, in the different communities."

Although this wasn't intentionally meant to be political, Don't Forgot The Driver was definitely a product of its surroundings. Speaking to BBC 2, Jones stated, "when you’re dealing with a coastal town the show becomes political whether you like it or not." The actor continued: "[L]ike everyone who’s trying to write anything now, whether it’s a novel, a play, or a piece of comedy, you’re affected by what’s going on in the world."

According to the Guardian, the show was meant to coincide with the original Brexit date of March 29, but seeing as there's, uh, a lack of certainty when it comes to all things Brexit, the show aired on April 9 instead. Brexit-based fiction can be a little tricky because dates are forever changing, and the outcome is still so unknown. But it does make for good TV; it's relevant and sometimes the best way to deal with heavy political jargon is to digest it through a comedy showcasing how everyday lives are affected.

At least one good thing about all the uncertainty surrounding Brexit is there's a lot of material to work on. Let's hope season 2 is right around the corner.