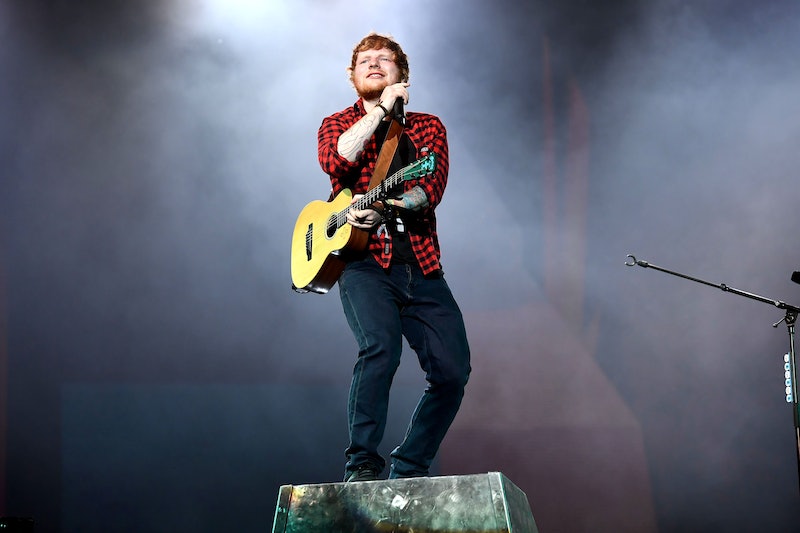 Ed Sheeran made history when he headlined one of the world's biggest festival stages, armed with only a microphone and his sidekick loop pedal. For fans of Sheeran, that 2017 Glastonbury performance was a chance to show his haters that this man, love him or hate him, has a huge amount of talent. Just one beat out of time would have killed the entire performance, but Sheeran pulled the whole thing off perfectly. So, even though the lineup for this year's Glasto was revealed a while ago, some are probably still wondering will Ed Sheeran be at Glastonbury 2019?

I know this will be very sad news for a lot of you, but no, I can say with quite a lot of confidence that Ed Sheeran will not be performing at Glastonbury this year. Well, certainly not as a headlining act at least. We've known about all three headliners — The Killers, The Cure, and Stormzy, — for a couple of months now, so my guess is that nothing will change on that front.

However, Sheeran does have a proclivity for making random surprise appearances — at weddings and such — so it wouldn't be totally out of character for him to pop up at the 2019 festival. And if anyone knows how to put on a secret set, it's the guys at Glastonbury.

According to his website, Sheeran will be touring Europe the week Glastonbury 2019 kicks off, playing shows in Germany and Austria 23 and the 23 and 28 June, respectively. However, who knows what could happen during those five days? He could easily hop on a plane and make his way over to Somerset, right?

Bustle have reached out to Sheeran's reps to check if he has anything up his sleeve in terms of Glasto. I'll let you know if I hear anything.

But, whatever happens with Glastonbury, you've got plenty of Sheeran goodness to look forward to.

The singer threw a very pleasant surprise your way when he re-emerged out of the blue to announce his new upcoming album with an Instagram post on Thurs, May 23. The singer wrote:

"Before I was signed in 2011, I made an EP called No.5 Collaborations Project. Since then, I’ve always wanted to do another, so I started No.6 on my laptop when I was on tour last year. I’m a huge fan of all the artists I’ve collaborated with and it’s been a lot of fun to make. No.6 Collaborations Project will be out everywhere on 12 July. It’s available to pre-order from midnight tonight local time and my song with @chancetherapper and @pnbrock will be out everywhere at the same time x"

Now that the Chance The Rapper collab is out in the world, you're probably wondering who else will feature on Sheeran's No.6 album. If it's anything like No.5, which featured the likes of JME, Wiley, and Wretch 32, then I reckon you can expect plenty more rap performances this time around. An appearance from this year's Glasto headliner Stormzy wouldn't surprise me, but I'm hoping that Sheeran will use his platform to boost more female talent. I'm hoping for Ms Banks, Lil Simz, or Stefflon Don, to name a few.