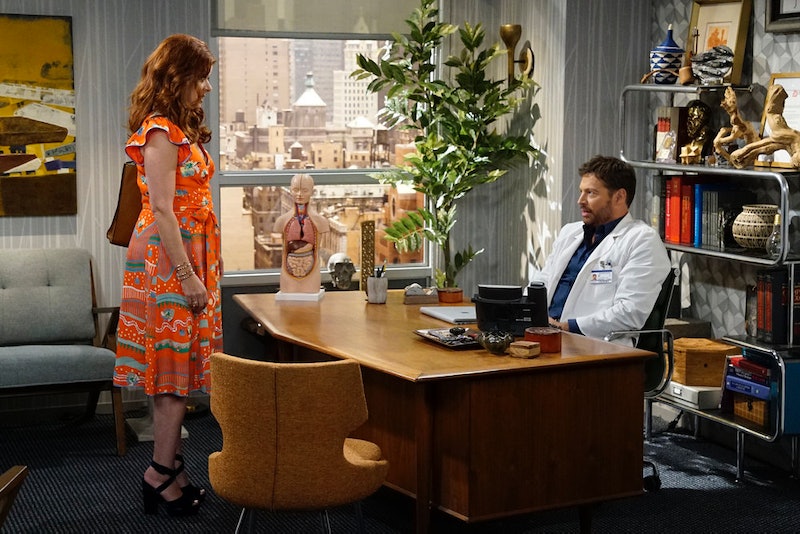 The Will & Grace revival couldn’t get away without bringing back Harry Connick, Jr.’s Leo. And in the Oct. 12 episode, the exes have their reunion. But will Grace and Leo get back together on Will & Grace? Let’s put it this way. Leo’s guest appearance was just that — a guest appearance.

The show Will & Grace is about Will. And Grace. And sure, Karen and Jack are in there, too, but the crux of the show focuses on the relationship between these two friends. There have been love interests on both sides in between, but when it came down to it, Will and Grace were all that Will and Grace really needed.

In the third episode of the revival, Grace is briefly hospitalized after she has a biopsy on a small lump in her breast (“the big one,” she says, begrudgingly). Of course, the doctor’s office calls her emergency contact, and just when you think Will is going to come striding in through the door, Leo is there instead. Turns out she never switched over her emergency contact after they got divorced. The gentleman he is, he takes Grace home and makes sure she’s settled, and that’s honestly as nice as these two have to be. When Leo brings Grace home, he and Will exchange hellos, and then Will says something along the lines of “I hope you two didn’t get back together… unless you did get back together!”

Remember that Will has never liked Leo because of the circumstances under which he met Grace. Will and Grace were about to have a baby together when she met and started dating Leo, and Will was so angry about it that he threw Grace out of their apartment after she confessed to the relationship. Though Will and Leo eventually came to a detente, and Leo even told Grace that he would marry Will, too, when they got hitched. But it's hard to believe that Grace wouldn't have some sort of hesitance with Leo because Will didn't like him. Will is the most important person in Grace's life, so his opinion matters.

They didn’t get back together at the hospital, and for most of the episode, Grace and Leo are trying to get the last word in during their arguments. (It’s a long-winded bit.) But when they actual get emotional and honest with each other, it’s a big moment for the two of them. Grace likes to bring up the fact that Leo cheated and that’s why it didn’t work out, but that’s way too easy and not entirely fair to Leo. Cheating in a relationship is a big no-no, but according to Leo, Grace “never let [him] in” because she was basically in a relationship with Will. “You never shared anything with me. You always ran to Will,” Leo says. Blaming Leo for cheating became a convenient way to scapegoat him, but really, Grace wasn’t wholly emotionally available for Leo. Leo and Grace will never get back together because Grace doesn’t need Leo like Leo needs Grace, and that sort of relationship can’t last. To be completely fair, Leo didn't need to cheat because Grace was distant — that's not what I'm saying here. I'm saying that they are both at fault, and it's a problem that Leo is all, "well, if you were there, I wouldn't have slept with someone else."

Leo’s dreamy eyes don’t just mean he’s right (though I would listen to anything Harry Connick, Jr. sang or said to me forever and ever). Grace never let Leo in, and his cheating was a convenient way to let him slide off the radar. Grace and Will get everything they need from an emotional romantic relationship from each other — the cuddling, the companionship, the support — that, since college, they’ve never had to go elsewhere. Sure, they don’t and won’t have sex with each other, but sex is easier to find than something to rival the connection they share. Scratching the itch is simple, but finding a lifelong love and soul mate takes a little legwork.

Of course, one can never say never on Will & Grace (or any other network show). The producers opted to ignore the finale episode where Will and Grace only become friends again because their kids fall in love. Of ignoring it all, co-creator David Kohan said, "We frankly did not want to see them being either good parents or bad parents. We wanted them to be Will and Grace.” So far, Connick, Jr. is only slated to be in the one episode of the season, so a Leo resurgence isn't likely. But both he and Debra Messing posted things on their social media accounts talking about their love for each other.

Since the writers are throwing out some Will & Grace canon for a modern take, Leo and Grace could stand a chance. Both stars seem down for it. But unless she learns to let go of Will and lean into Leo, viewers shouldn't bet on it.

More like this
Devi Is Going To Meet A “Smoldering Bad Boy” In ‘Never Have I Ever’ Season 4
By Jack Irvin and Gabrielle Bondi
'MAFS UK' Changed The Rules After Matt & Whitney Cheated On Their Partners
By Catharina Cheung
Are Johnny and Victoria Together After 'Bachelor In Paradise'?
By Kadin Burnett
Shonda Rhimes' Net Worth Makes Her One Of The Wealthiest People In TV History
By Hugh McIntyre
Get Even More From Bustle — Sign Up For The Newsletter