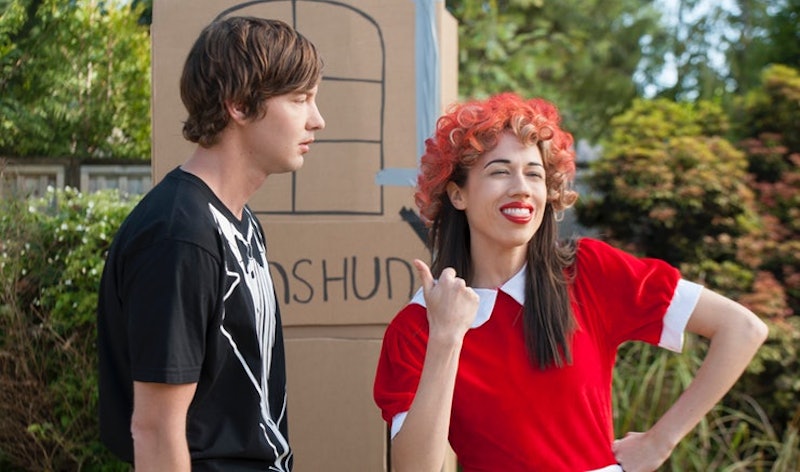 Fans who have followed Miranda Sings' career, from her YouTube videos that began in 2008 to her Netflix show, Haters Back Off, the fun never seems to end. Or maybe it will, if there isn't a Haters Back Off Season 3. The second season of the show, created by and starring Colleen Ballinger, hits Netflix on October 20, but don't despair. It's fairly likely that it's not the last we'll see of Haters Back Off.

Considering that the second season of the show featuring Miranda Sings wasn't announced until December of last year, a Season 3 renewal wouldn't be announced until later this year, and then that season would arrive on Netflix in the following October, like the first two seasons. (Season 1 spoiler ahead) Since the first season of Haters Back Off revealed one of Miranda's videos finally going viral, the renewal for Season 2 seemed almost certain so everyone could finally see how Miranda does after one success. Based on the Season 2 trailer, the character and her zany family are back with their usual malapropisms and idiosyncrasies. (Can't you just imagine Miranda responding to that description with, "Hey, I'm not an idiot"?)

The new season also includes the unveiling of a new character, as Miranda's estranged father, played by UCB founder Matt Besser, joins the mix. With the addition of Besser, it doesn't look like Haters Back Off has any plans of stopping after only two seasons.

As Miranda strives toward becoming a "legend," new milestones present themselves that will likely make Season 2 even more eventful than the first. Will she make it to New York City — "the windy city" as she calls it? Will Uncle Jim's "five-phase plan" to get Miranda onto Broadway work? What will her estranged father contribute to this whole plan? There are so many questions, and luckily all of them will be answered on Friday when all eight episodes premiere on Netflix, so consider your weekend plans made.

The longevity of Ballinger's online persona is an inspiring feat for all YouTube creators, since Miranda Sings started out on the video platform in 2008. Haters Back Off is in many ways a meta commentary on YouTube fame, and part of its genius is how Ballinger plays an un-talented wannabe star with so much skill that she ended up becoming a star of the first scripted series (on a streaming network) for a YouTube personality. That's such a great achievement, and, even if Miranda remains clueless about what audiences might actually want (like, say, real talent, for instance), Ballinger's success reveals that she's a savvy innovator in the entertainment industry.

Ballinger still uses YouTube to play Miranda and engages with fans between seasons of Haters Back Off. This past April, four months after Season 2 of her show was announced, the character made a YouTube video revealing that her father would appear on the upcoming season, and told her fans that Matt Besser would play him. In making this video, Ballinger again showcases her unique shrewdness, as she continues to draw in fans for her Netflix series in a more personal way. In fact, Miranda Sings' Youtube channel gained almost three million subscribers since the Netflix spin-off was announced in 2016.

Since Ballinger and her alter-ego's fanbase only keeps growing, the chances of a Season 3 of Haters Back Off announcement arriving in December are high, and so too are the chances that the Netflix show will be back with a new season in October, 2018. Fortunately, Season 2's premiere on October 20 will provide fans with enough off-key singing and Miranda-misadventures to tide them over until next year.

More like this
What’s New On Netflix: Ana De Armas’ 'Blonde' & A Nick Kroll Special
By Arya Roshanian
What’s New On Netflix: Meet 'The Real Bling Ring'
By Arya Roshanian
What Is 'Pretty Wild' Star Tess Taylor Up To Now?
By Morgan Leigh Davies
Here's How To Apply For 'Love Is Blind,' No Matter Where You Live In The US
By Grace Wehniainen
Get Even More From Bustle — Sign Up For The Newsletter