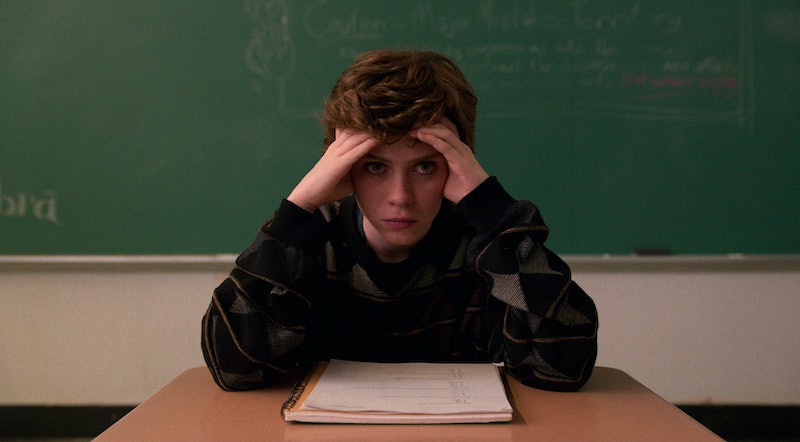 Update: Due to coronavirus-related circumstances, Netflix has canceled I Am Not Okay With This.

Earlier: It's been a rough couple years for Sydney (Sophia Lillis). First, her family moved to the aptly named Brownsville, Pennsylvania. Then, her dad died. Now, she's just discovered she has superpowers that can make peoples' noses bleed, heads explode, and take down entire forests. As she learns more about her powers and where they're coming from, it seems inevitable that I Am Not Okay With This will return for Season 2.

The series was created by Jonathan Entwistle and based on a graphic novel by Charles Forsman — the same duo behind The End of the F***ing World, whose first installment ended on a similarly shocking note. 2017's Season 1, which was set in the U.K., concluded with James getting shot by the police and seemingly bleeding out on the beach. Many people wanted the Netflix series to end there — it's how Forsman concluded his graphic novel, after all. Despite this, TEOTFW returned for a second and final season, which gave James and his romantic interest, Alyssa, a more conventionally happy ending. So it's possible Netflix will do the same with I Am Not Okay with This.

Throughout I Am Not Okay with This Season 1, audiences saw snippets of Syd running down the street, clearly traumatized and soaked with blood. In Episode 7, we finally learn the impetus — Dina's meathead ex-boyfriend, Brad, finds Syd's diary, which she'd been writing in at the behest of the school counselor. At prom, the injured football player grabs the mic and begins reading her private thoughts to the whole auditorium. Before he can tell everyone about her supernatural powers, however, Syd explodes his head, Carrie-style.

Forsman's 2017 graphic novel actually ends on an even darker note. For one, the reader learns that instead of Syd's father dying by suicide, as he does in the show, he asks his daughter to kill him, which she does. Then, in the book's final moments, Syd herself dies by suicide. The ending clearly shocked and disturbed many readers, who said as much in their Goodreads reviews.

Fortunately, Syd is still alive and (relatively) well in the Season 1 finale. There's no news on whether I Am Not Okay with This will return for more seasons, but it could go either way. The tight, seven-episode season is a satisfying yet incomplete ending to a dark and unconventional coming-of-age story. If it follows the same trajectory as TEOTFW, however, it could return in 2022, since its predecessor aired in 2017 and 2019, respectively.

On the positive side, our protagonist learns that Dina "didn't not like" their drunken kiss. This is news to Syd, since her feelings towards Dina and telekinetic powers were both equally terrifying to her. Fortunately, Stan also appears to still be in her corner, despite the fact that she only likes him as a friend.

The figure who's been following Syd, however, is less comforting. "Should I be afraid?" she asks him (or perhaps it?) as it approaches her in the Brownsville watchtower. Her father's dog tags are bloodied, the entire school saw her explode Brad's head, and everyone knows about her feelings for Dina. What else does she have to be afraid of, really?

"They should be afraid," the figure responds. "Let's begin." Yes, let's.