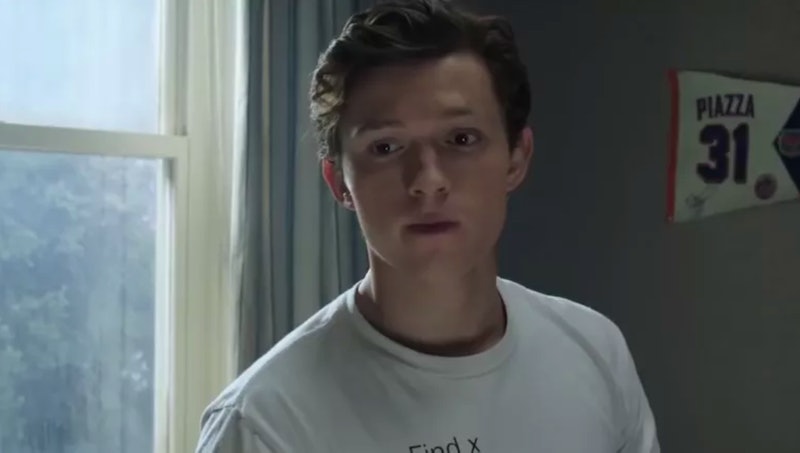 Avengers: Endgame spoilers ahead. Now that the — for lack of a better word — dust has settled on the opening weekend of Avengers: Endgame, Marvel fans are anticipating the next MCU installment, Spider-Man: Far From Home, with more questions than ever. While there are plenty of new issues to address in the upcoming film, those who are curious about if Tony Stark will be in Spider-Man: Far From Home may have a more loaded answer than they bargained for — especially in light of a new fan theory that's emerging on Tumblr.

If you've seen Endgame, then you're extremely aware that Tony Stark died in the final battle with Thanos, making the possibility of a living version of him coming back in Spider-Man: Far From Home or any other subsequent Marvel movie a little, uh, slim. And Robert Downey Jr., for what it's worth, is not officially cast in the upcoming Spider-Man flick on IMDb. But as we all know, that means approximately nothing in Marvel-land, and does not rule out the idea of Tony Stark being in Far From Home — be it in a memory, a dream, or some other nod to the fact that Iron Man was the hero that ushered this iteration of Spider-Man into the MCU.

But according to one Tumblr theory, we could have an Iron Man cameo a heck of a lot darker than that. A viral Tumblr post by user iiporcelain-marionetteii shared screenshots of the Iron Man page on the Marvel Cinematic Universe Wiki, which lists Spider-Man: Far From Home as a movie that Iron Man is in; while the current version clarifies that this is in the list because he's "mentioned," the screenshots going around don't have that same note. There's also a screenshot of the Mysterio Marvel Wiki, which indicates that his "Hobbies" include "creating illusions" and "manipulating people," and that his "Goals" are "Destroy Spider-man in the most dramatic way possible."

Essentially, fans think there's a chance that Mysterio — played by Jake Gyllenhaal in the upcoming film — will use his abilities to mess with one unsuspecting bean named Peter Parker, namely by creating illusions of the mentor he just watched die. Mean? Absolutely. Too soon? Extremely. Entirely believable, given the disregard the MCU has for everyone's collective emotions re: Peter Parker and his pseudo-dad-mentor Tony Stark? Yep.

That said, it's unclear what role Mysterio will take in this upcoming Spider-Man film. While he is one of Spider-Man's most notorious villains in several arcs of the comics, a new still of Mysterio and Spider-Man was recently made public, with the two of them seemingly allied together — a sentiment echoed by actor Tom Holland's caption on Instagram, "The Dream team!" So it may be safe to assume that, at the very least, Mysterio's introduction to the MCU will not mirror his entry into the comics, perhaps giving us a villain whose manipulation begins long before fans see him on screen.

Another thing that makes Mysterio using Tony Stark as an illusion a little more possible is the fact that, per Newsweek, Marvel Studios president Kevin Feige recently clarified at a fan event in Shanghai in April that Spider-Man: Far From Home is considered the end of "Phase 3" of the Marvel universe; until then, it was assumed that Avengers: Endgame was the end of "Phase 3," and that Far From Home would kick off "Phase 4." This definitely implies that more weight will be put on the events of this Spider-Man movie than Homecoming, which introduced the new hero to the MCU. It also implies that the studio is not quite finished dealing with the aftermath of Endgame enough to justify starting a whole new chapter. While fans are no doubt expecting to see this new film address the snap (particularly in how it affects Peter Parker's classmates, half of which are now older than he is), it might not be too much of a stretch to expect some kind of nod — illusion or not — to Tony Stark's role in Peter Parker's arc. Whether or not our hearts can take it is yet to be determined.