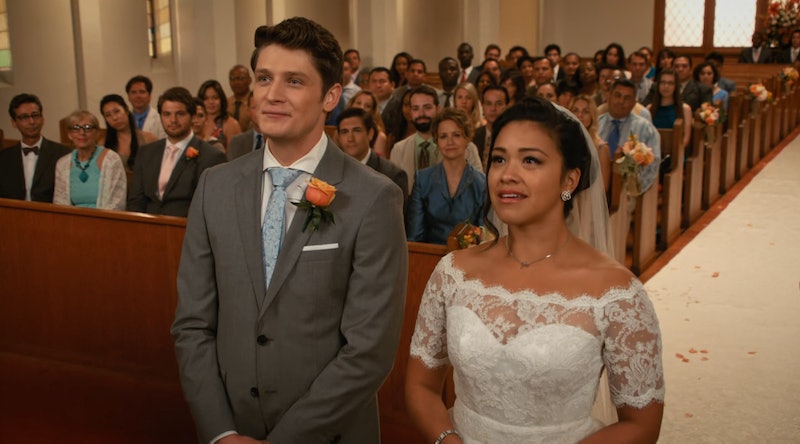 After five seasons of the Jane-Rafael-Michael love triangle, you'd think Jane the Virgin would have gotten a little closer to sorting out its central romance, for better or for worse. Yet now in the final season, it doesn't look like Jane is any closer to picking her one true love than she was back in Season 1. After Michael's "death," Jane and Rafael were so close to finally tying the knot. But now that Michael's back, so are Rafael's insecurities, and Jane is understandably in crisis. Will Jane get married again in Season 5, or has all this will-they-or-won't-they caused irreversible damage to both of her love lives?

Series creator Jennie Snyder Urman told TVLine that there is definitely going to be a wedding in the Jane the Virgin Season 5. "There’s a wedding in the middle of our season this year, and we do our singing chorus of 'have sex and enjoy love' in a different way," Urman said. "Jane always has a pregnancy around the season finale, and that will happen."

While Urman doesn't reveal exactly who will be getting hitched in the impending nuptials — or whether the newly weds will be the same couple as the mom- and dad-to-be — People published some set photographs showing Gina Rodriguez in a wedding dress while filming. Standing next to Rodriguez is Yara Martinez, who plays Luisa, Rafael's sister. This seems to imply that the wedding is Jane and Rafael's. However, People also points out that Jane isn't opposed to the occasional dream sequence, so maybe this wedding scene isn't even happening in Jane's reality.

After all, Jane and Michael are still technically married. Moments after Jane and Jason decided to call it quits on their marriage at the end of Episode 3, Jason scraped his fishing pole across the place where Jane accidentally fired his gun all those years ago. In a poetic moment of familiar symbolism, snow-like white paint chips fell on him and his memory was restored.

He might have gotten his memories back, but after that, it looks like Michael forgot to file those divorce papers. Jane can't marry Rafael as long as she's still married to Michael. It's possible she could wind up re-marrying Michael, but then again, she wouldn't need to remarry him if they're still husband and wife, right? And the odds of having a third major love interest come out of the woodwork this late in the game are slim to none.

Love is obviously one of the central themes of Jane the Virgin, but Urman assured fans in an interview with Variety that it's not the only thing on her characters' minds this season. "It’s the balance of romantic with professional," she said, adding that both areas will be in "lockstep" by the final episode.

That does make it sounds like everything is going to work out in the end, whether Jane winds up getting married or not. Single or not, it seems reasonable to expect that Jane will get her happy ending. After all — this is a telenovela, right?

More like this
Gavin Drea Is Just As Funny Off Screen As His 'Wedding Season' Character Is On Screen
By Darshita Goyal
Wedding Season’s Omar Baroud Currently Stars On West End
By Darshita Goyal
Kaley Cuoco Was Set Up With Her New Boyfriend Tom Pelphrey By Her Manager
By Hugh McIntyre and Jake Viswanath
The ‘Emily In Paris’ Season 3 Release Date Is Here, Plus The First Footage
By Bustle Staff
Get Even More From Bustle — Sign Up For The Newsletter