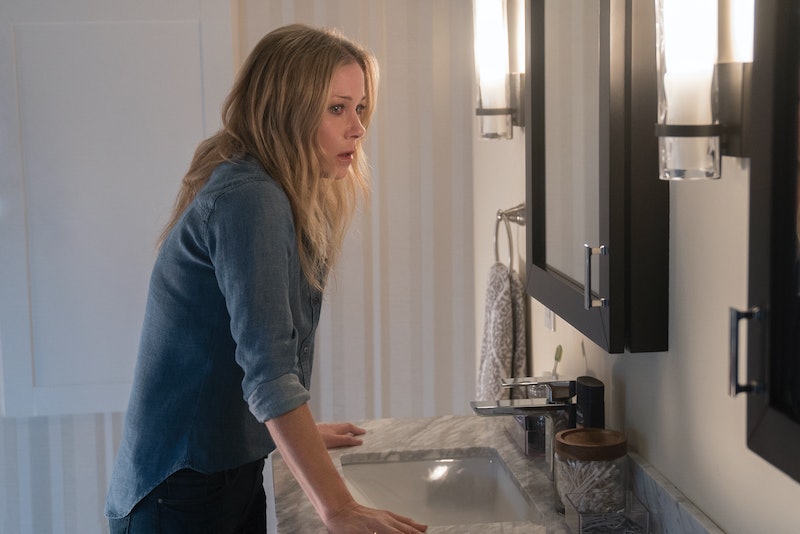 Spoilers ahead for Dead To Me Season 1. Netflix's Dead To Me begins innocently enough: Jen (Christina Applegate) and Judy (Linda Cardellini) are just two strangers who hit it off at a grief support group. While Jen's husband had been killed in a hit-and-run, her friend's fiancé died of a heart attack — or so Judy says. Not only do we soon learn that Steve (James Marsden) is alive and well, but that Judy is the one who hit and killed Jen's husband, Ted, and that she and Steve have been covering it up ever since. The show's mystery, then, is not who killed Ted, but if Jen will tell Judy she killed her husband. And she does... but not until after she's deeply ingrained herself in Jen's life.

It seems absolutely buckwild that the person who killed Ted would purposefully seek out his widow and befriend her, but that's exactly what Judy proceeds to do. She apparently hoped that if she became close enough to Jen, she'd be absolved of her guilt. And it almost works — the women become best friends, talking to each other on the phone every night before Judy eventually moves into Jen's guest house. Ironically, her two sons are more wary of the new stranger living in their home than Jen, and we get even more foreshadowing from Steve, who warns, "Wherever Judy goes, chaos tends to follow." But as we know, he was complicit, too.

But although Judy has a front-row seat to Jen's grieving process, she doesn't fess up to the murder (or is it manslaughter?) until Episode 9. During a tearful conversation, Jen first admits that she and Ted had a huge fight the night he died. And while she told the police that he had been out running, it was 1 a.m. and he'd been wearing Vans. In actuality, she had punched Ted in the face then kicked him out of the house, and as a result, now feels responsible for her husband's death.

Survivor's guilt is a real thing, and although Ted's death was in no way Jen's fault, it's natural for her to feel guilty about the way they left things. Judy, however, can't take it anymore and finally reveals her secret. "I had a '66 Mustang!" she blurts out, which is the make and model of the car that hit Ted. "It was so dark, and I was driving, and I didn't see a bend in the road, and I took it too fast, and I — he was just right there. I wasn't even sure what had happened. And then I wanted to go back, but I couldn't."

Furthermore, we know that the reason Judy "couldn't" was because of Steve, who yelled, "Drive the car, stupid!" at his shell-shocked fiancée. Judy feels awful about what happened, apologizing profusely and saying she didn't know she would come to love Jen or her family so much. But the feelings are not mutual. After all, Jen's just discovered that her best friend was the one who upended her entire family, so she's not feeling particularly generous when she hisses, "You can die."

However, Jen and Ted had a tumultuous marriage, as we learned over the course of the season. And while that doesn't absolve Judy and Steve of what they did, it seems like Jen and Ted were over by the time he died. Jen admits to Judy (pre-confession) that Steve had stopped touching her years before — after she had a mastectomy — which absolutely broke her heart. And as she discovers when she logs onto his computer to play a video game, Steve had been having an affair with a waitress/musician named Bambi before he died. Not only that, but he told his (much younger) girlfriend that Jen had died, which is pretty heinous — and ironic.

Hopefully, the two women can work things out. While Judy's actions were inexcusable, she's come clean, apologized, and tried to make amends, like the rabbi told her at Abe's funeral. Jen is still furious with her (and rightfully so) for the hit-and-run, but it seems like they're ready to put their differences aside. In the Season 1 finale, Jen asks Judy to "come home" only to reveal she's shot and killed Steve. When Judy arrives, he's floating face-down in the pool, a cloud of blood surrounding his dead body. This time it's not an accident, and Jen will need all the help she can find to get out of this mess. Perhaps helping Jen not to get caught will be the repayment Judy has been looking for.

More like this
Nicola Coughlan Shared A Lady Whistledown Excerpt From ‘Bridgerton’ Season 3
By Grace Wehniainen, Alyssa Lapid and Sam Ramsden
Devi Is Going To Meet A “Smoldering Bad Boy” In ‘Never Have I Ever’ Season 4
By Jack Irvin and Gabrielle Bondi
New ‘Lupin’ Part 3 Teaser Hints That Assane Will “Go Out In Style”
By Brad Witter
The ‘You’ Season 4 First Look Shows Joe’s New Identity And Potential Victims
By Bustle Editors
Get Even More From Bustle — Sign Up For The Newsletter