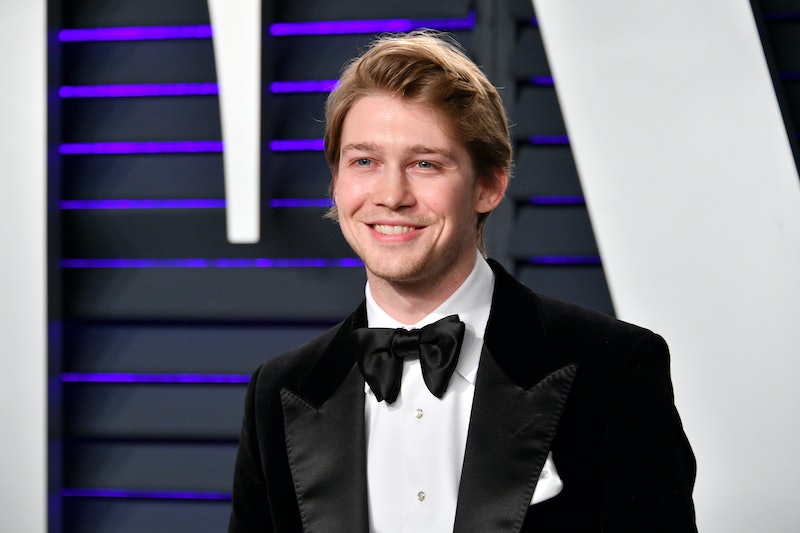 Joe Alwyn and Taylor Swift have been dating for a few years now, but the couple is notoriously private. Still, it's possible Alwyn will be at the 2019 Billboard Music Awards to support Swift, who's performing her new single "ME!" with Panic! At the Disco's Brendon Urie. Their public appearances together are rare, but Alwyn's been spotted at her shows before, so it's not entirely out of the question.

And Swift has done the same for him, too; they clearly show up for each other when it matters. Alwyn's latest film, The Favourite, was up for a whole bunch of Oscar nominations earlier this year, and while Swift didn't walk with him on the red carpet, she did attend afterparties with him and hang out with his co-stars. Alwyn did not attend the 2018 Billboard Music Awards with Swift, but because she's opening the 2019 show — not just scooping up some awards — he may want to attend and cheer her on.

But, eh, maybe don't count on it? Last September, Alwyn told British Vogue that he prefers not to comment on their relationship, which is likely part of the reason the two shy away from the spotlight; they know it'll be a whole thing if they show up somewhere together. "I'm aware people want to know about that side of things," he said. "I think we have been successfully very private and that has now sunk in for people … but I really prefer to talk about work."

He said pretty much the same thing to Esquire in December 2018. "I know what I feel about it," he said. "I think there's a very clear line as to what somebody should share, or feel like they have to share, and what they don't want to and shouldn't have to." OK, OK, fine, you don't have to comment, Joe.

The couple is super private, sure, and we should all respect that (even though the Swifties really, really want to know more about their relationship). That said, fans are up in arms about some maybe-Easter eggs in Swift's video for "ME!" — namely the appearance of London landmarks like the Houses of Parliament, Big Ben, and St. Paul's Cathedral. Alwyn is British, so are they just a bunch of references to her boyfriend's home country? Are they moving to London? Will Swift develop a faux British accent like Madonna or Gwyneth? A lot of questions have been raised, few answers have been offered.

Some fans even went as far as to speculate that Swift and Alwyn are engaged, as Urie proposes to Swift in the video, but as Urie then gives her a cat, the other leading theory was that Alwyn gifted her a cat — which Swift seemed to later confirm.

So for now, it seems the lovebirds are still enjoying their private time as a happily un-engaged couple. The two have yet to even make an official appearance together yet, so perhaps the BBMAs will mark their big debut. But more than likely, if Alwyn does show up, he'll just pop up in the crowd and skip the red carpet entirely. You'll have to look closely for him in the audience.

More like this
Kanye West Apologizes To Kim K "For Any Stress I Have Caused" In Rare Interview
By Jake Viswanath
Dan Levy Appears In The Latest Teaser For The Weeknd's HBO Series, 'The Idol'
By Jake Viswanath
Everything To Know About Taylor Swift’s 10th Studio Album, 'Midnights'
By Grace Wehniainen and Jake Viswanath
Is Dua Lipa Dating Trevor Noah? New Photos Show Them Kissing & Hugging
By Brian Anthony Hernandez and Martha Sorren
Get Even More From Bustle — Sign Up For The Newsletter