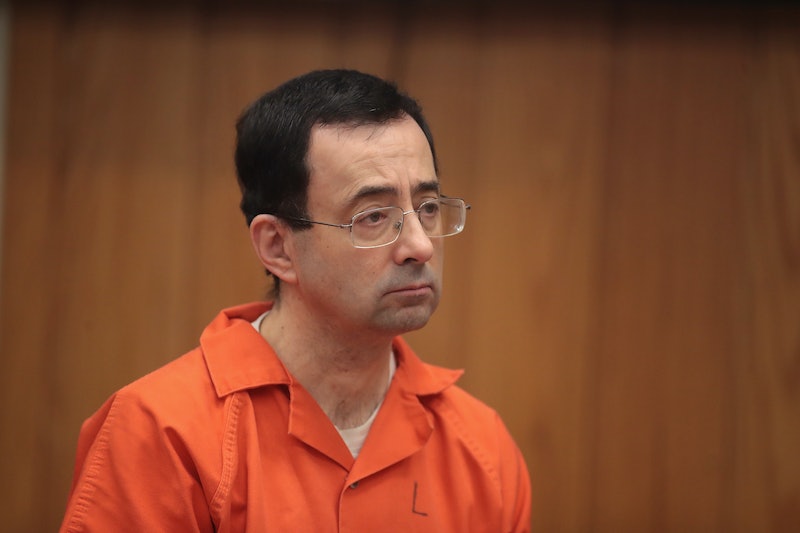 On May 3, HBO will premiere Erin Lee Carr's documentary At the Heart of Gold: Inside the USA Gymnastics Scandal, which delves into the abuses experienced by athletes at the hands of Dr. Larry Nassar, his emotional trial and sentencing, and the survivors' attempts to move on. The accusers of Nassar, a doctor who served as the osteopathic physician for the U.S. Women’s Olympic gymnastics team and physician at Michigan State University, included decorated Olympic athletes such as McKayla Maroney and Gabby Douglas. As depicted in the documentary, the doctor was convicted and sentenced. But will Larry Nassar ever get out of prison?

In July of 2017, Nassar pleaded guilty to child pornography charges and was later sentenced to 60 years in federal prison, as reported by IndyStar. In January of 2018, he was sentenced to 40 to 175 years after pleading guilty to seven counts of sexual assault of minors, The New York Times reports, Judge Rosemarie Aquilina announced that she'd "signed his death warrant." The following month, Nassar pleaded guilty to three more accounts of sexual assault and was sentenced to an additional 40 to 125 years, also per The Times.

Judge Aquilina, who is interviewed in At the Heart of Gold, was celebrated for her allowing more than 150 women to give victim impact statements against Nassar in her courtroom, and sentencing Nassar to 175 years in prison.

"Without open, honest communication in a safe place, nothing will change," she said in a statement to the Times Free Press. "The vulnerable can no longer pay the price of silence and indifference. Change is overdue. Working together we can show victims that they matter and there is meaningful change, not just idle talk."

In December 2018, the court agreed to review Nassar's appeal, per CNN, after his lawyers alleged bias on Aquilina's behalf.

“Judge Aquilina made numerous statements throughout the proceedings indicating that she had already decided to impose the maximum allowed by the sentence agreement even before the sentencing hearing began," Nassar attorney Jacqueline McCann wrote in an appeal for a resentencing, per Newsweek. "Thus, from the defendant's perspective, the sentencing hearing was just a ritual."

In early April, the first of Nassar's appeals (for his original 40-year sentence) was rejected by The Michigan Supreme Court, according to the Detroit Free Press. However, they are still reviewing the other 40-year sentence and if Nassar's rights were violated by "provocative remarks from Judge Rosemarie Aquilina," according to the Chicago Tribune.

Last August, Newsweek reported that Nassar alleged an assault took place against him once he entered general population at the high-security United States Penitentiary, in Tucson, Arizona. He stayed there for six months and was then moved to Oklahoma Federal Transfer Center, a holdover facility, before landing at Coleman II United States Penitentiary in Sumterville, Florida, per Detroit News.

Seeing Nassar in prison for life with little chance of his getting out is only part of the retribution survivors are hoping for. Although there has been a $500 million global settlement agreed to by the MSU Board of Trustees in 2018, MSU Today reports, there are still settlement conversations happening between Michigan State University and plaintiffs in 55 lawsuits related to Nassar. As of April 24, no agreements had been reached in mediation, the Detroit Free Press says.

"The Wave 2 settlement discussions are continuing to move forward, and these filings are just one step in the process regarding the overall mediation," MSU spokeswoman Emily Guerrant told the Free Press. "While we have already settled some of the Wave 2 cases, it is still our goal to resolve all of them, and MSU continues to work with the plaintiffs and their lawyers to negotiate the settlements."

The USA Gymnastics and the US Olympic Committee are still grappling with their own lawsuits involving Nassar, the Guardian notes. Even with Nassar behind bars, the story is not and will surely never end for those who were forced to endure him.