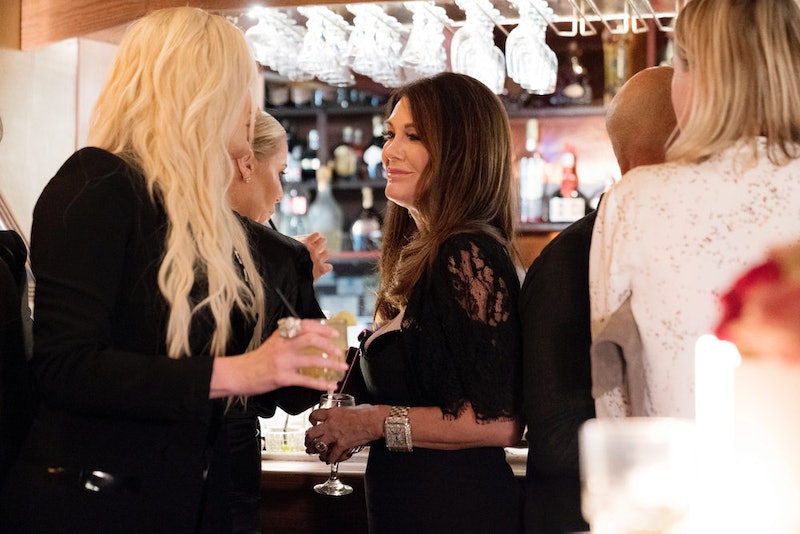 It’s hard watching friendships fall apart, and yet Bravo viewers repeatedly do so, week after week, for sheer entertainment value. Sometimes the friends make up, sometimes they don’t — and the women of Beverly Hills are really making fans wait to find out which road they'll go down. Lisa Vanderpump has estranged herself from her nearest and dearest on Real Housewives Of Beverly Hills — yes, even from Kyle and Dorit. Right now, it’s hard to say if the friendships will ever mend, but it’s also hard to say how it will affect filming for future seasons. For example, some are speculating that Lisa Vanderpump won't be at the RHOBH Season 9 reunion. There may be just too many hurt feelings.

This all started, as most fans remember, because of a dog by the name of Lucy Lucy Apple Juice. Dorit got a dog from Lisa’s Vanderpump Dogs, and instead of giving it back to Lisa when the dog didn’t mesh with her family, Dorit gave it to another woman, which isn’t what you’re supposed to do in these situations. Lisa allegedly leaked these details to Teddy and the press, and because of this reported backstabbing, no one is friends anymore. One dog has caused the demise of a whole franchise, essentially.

Really — Lisa reportedly stopped filming mid-season because she was being "bullied" by the rest of the cast, according to Page Six. And that's not all. In a May 2019 interview with Hollywood Life, Lisa said that she “hadn’t decided” whether or not she’d be at the reunion taping or up for another season of Real Housewives Of Beverly Hills. “This season with Housewives has been beyond brutal — beyond. I’ve never experienced anything like it. I thought Season two, four, and Season six were bad, but this has been fifteen episodes of bashing in total,” she said.

The problem now with the plot of Real Housewives Of Beverly Hills Season 9 is that it’s so beyond the dog — it’s about, according to the rest of the cast, Lisa’s inability to admit when she’s wrong and her attempts to control the plots of the rest of the cast while making herself look like an angel. They have had enough of her antics, it seems.

In an interview with Bustle, Kyle Richards confirmed that “puppygate” isn’t the focus of the rest of the season. "Of course, the topic will come up here and there, but we move on to other problems,” she said. And what if Lisa decides not to come to the reunion? Kyle said it will be just fine. "There's enough going on with other situations that even if some people don't show up, there's still a lot to discuss. It's not going to be fun either way,” she said. "No one wants to go. I think it's going to be a really bad one. I mean bad for the cast.”

Usually bad for the cast is good for fans and ratings, but it’s still upsetting to watch our fan faves go through such struggle. One thing is for sure, though — no matter if Lisa shows up to the reunion or not, there will still be the drama we’ve come to expect from Real Housewives Of Beverly Hills.