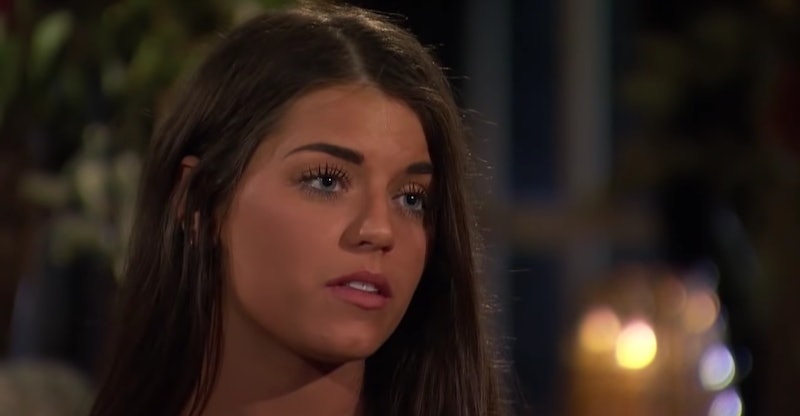 We're nearing the end of Peter's Bachelor season, and there's still not a clear frontrunner for Bachelorette. Will it be Kelley, who seemed entirely too over it to babysit a group of dramatic suitors? Or Hannah Ann, who, at 23, would likely just have a group of man-children? Time will tell, but there's a solid case to be made that the next Bachelorette title will go to Madison.

Though she and Peter have had one of the strongest, most consistent relationships throughout the season, they seem to have a big hurdle ahead that they may not be able to clear successfully. As we learned on Madison's hometown date, she hasn't yet told Peter that she's a virgin and doesn't plan to have sex until she's married, and given the whole windmill incident, we know that's not the case for Peter. He's also made clear that physical intimacy is an important of a relationship for him, so it's hard to predict how he'll respond to Madison's apparent ultimatum: in previews for the upcoming Fantasy Suite dates, she says she won't "be able to say yes to an engagement" if he's slept with the other women. Peter appears to reply, "I have been intimate," and it looks like Madison walks away from the table.

None of this necessarily means that Peter and Madison don't wind up together, but if the promos portray the interaction accurately, this could mark the end of their relationship, thus leaving Madison open to become the Bachelorette.

At 23, Madison would be the youngest Bachelorette to lead a season. Hannah Ann would be in the same boat if she were to become the Bachelorette, so maybe it's inevitable that the show will have another young lead. However, after Colton Underwood's season, it would be interesting to see how the franchise might handle issues of faith and virginity from a female perspective... hopefully, they'd do so with a little more tact.

There's also the question of if Madison would even want to be the Bachelorette. Though the franchise has consistently featured Christian leads, a reality dating show still may not be the easiest place to meet someone with the same stringent religious values that Madison has, particularly as it grows more and more into an influencer breeding ground than an actual place to find love. Sorting out who's there for the "right reasons" has only become more difficult.

Whether Madison is up for the task — or if she'll even be single when the time comes — we'll have to wait and see.