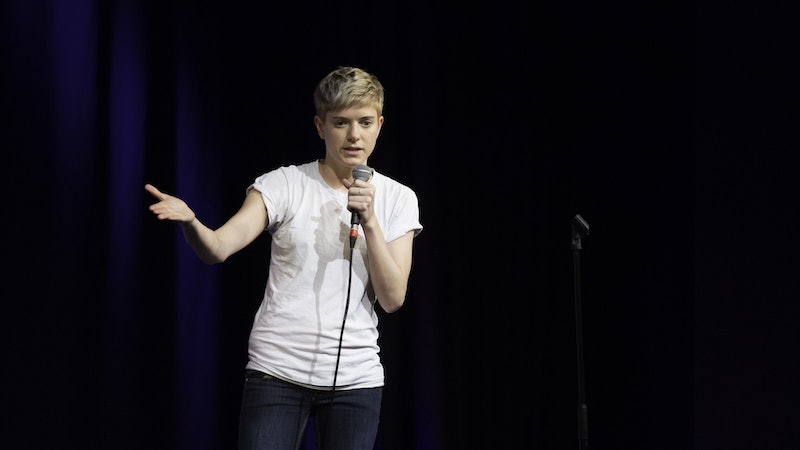 Following a string of successful radio gigs and TV appearances, it's fair to say that comedian Mae Martin is very much on the rise, and after landing her very own Channel 4 series, Martin's career looks set to reach new heights. The semi-autobiographical series centres around a recovering addict as she attempts to navigate the modern-day landscape of gender and sexuality. The upcoming comedy-drama will come as welcome news for fans of the funny-woman, many of whom would presumably jump at the chance to see the comedian perform live. But will Mae Martin tour the UK in 2020?

Well, if her official website gives us any indication, a 2020 UK tour is not currently in the pipeline, however, fresh tour dates could very well be announced in the near future. Just to be sure, I have reached out to Martin's representatives for comment, and will update with any new information the second it becomes available.

Although nothing has been announced in regards to a full-blown UK tour, the comedian recently wrapped up a string of shows at The Bill Murray comedy club in London. The six-date comedy show, titled Mae Martin: Work in Progress, ran throughout January and February 2020 — and aimed to share "new material towards her hotly-awaited new stand-up tour." So, does this mean fans have more gigs to look ahead to later in the year? We'll just have to wait and see.

As the Radio Times reports, Martin's latest venture arrives in the form of Channel 4's Feel Good, which is loosely based on the comedian's real life. The series follows the story of a recovering addict's attempt to get her life back on track whilst in the midst of a fresh romantic relationship. The brand new comedy-drama, which was formerly titled Mae and George, will debut exclusively on E4 here in the UK, and for international viewers, the series will be available to stream on Netflix.

In addition to Martin, the cast of Feel Good features a string of other impressive names, including Fresh Meat actor Charlotte Ritchie, Coronation Street's Sophie Thompson, and Friends star Lisa Kudrow — the latter of whom is set to appear as Mae's interfering mother, Linda.

"I’m thrilled to be playing Linda but I first fell in love with Mae and the scripts she and Joe wrote," Kudrow revealed, before describing the upcoming comedy as "sweet and very funny and awkward and well observed."