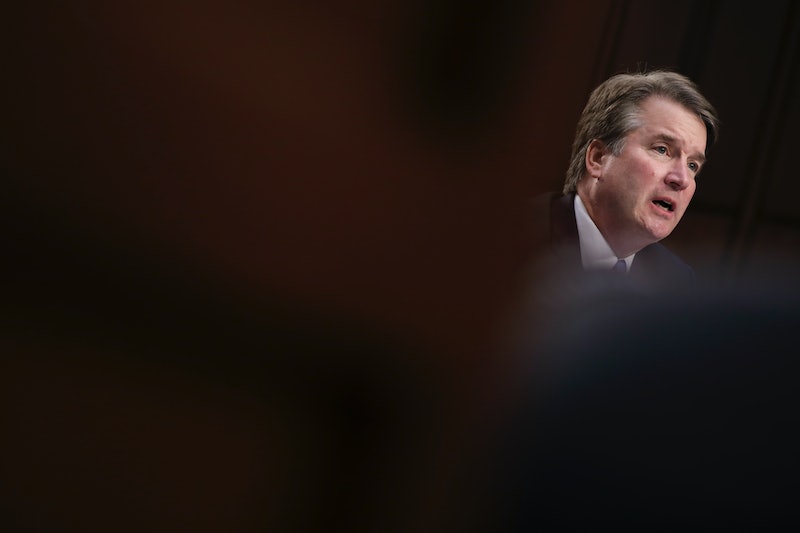 Supreme Court nominee Brett Kavanaugh's confirmation hearings were thrown into turmoil when Dr. Christine Blasey Ford accused him of attempting to rape her in high school. Ford is now scheduled to testify in front of the Senate Judiciary Committee about the matter — but many Democrats want the only alleged witness to the alleged assault, Mark Judge, to testify about the Kavanaugh allegations as well.

Ford claims that Judge was in the room when Kavanaugh pinned her to a bed, attempted to rip off her clothes off, and put his hand over her mouth so she wouldn't scream while they were at a party in 1982. Judge, who'd previously acknowledged that he often got blackout drunk in high school, denies any recollection of this incident, and Kavanaugh categorically denies having assaulted Ford.

"An alleged eyewitness and the third person alleged to be in the room. How do you avoid that?" Durbin told the Daily Mail. "Listen, if they don't bring him – it's not on the square if Judge isn't in the room."

So far, however, it doesn't look like the GOP-controlled committee will call him to testify. On Tuesday, Sen. Lindsey Graham told reporters that there's "no reason to" for Judge to testify in front of the committee, and Sen. Mike Lee's press secretary Jillian Wheeler confirms to Bustle that Judge isn't schedule to appear before it.

The Washington Post also obtained a letter from Judge to Sen. Chuck Grassley, the chair of the Judiciary Committee, in which Judge says that he "do[es] not wish to speak publicly" about the allegations.

To be sure, none of this is the final word; in theory, senators could subpoena Judge to compel him to testify. Bustle has reached out to Grassley for comment on whether there are any plans to bring Judge before the committee.

As it stands, though, it looks unlikely that Judge will testify, despite being the only alleged witness to an alleged rape attempt. Graham explained his own reasoning on the matter to the Washington Post's Seung Min Kim on Tuesday.

"He’s already said what he’s going to say," Graham said. "I want to hear from her, if she wants to speak, and I want to hear from [Kavanaugh].” But although Judge has indeed spoken about the matter, he hasn't done so under oath, as Ford and Kavanaugh are scheduled to. This is a crucial distinction because, as the Post's Aaron Blake points out, it means that Judge has no legal obligation to tell the truth on the matter, unlike Ford and Kavanaugh.

Kavanaugh had been expected to sail through his confirmation hearings before Ford accused him of attempting to rape her when he was a student at Georgetown Preparatory School. Ford alleges that in 1982, a drunken Kavanaugh "corralled" her into a bedroom at a house party, pinned her to a bed and aggressively groped her.

“I thought he might inadvertently kill me,” Ford told the Post. “He was trying to attack me and remove my clothing.”

Ford says that Judge then leapt on top of both of them, sending all three tumbling off the bed and giving her a chance to escape the room. She says she then locked herself in a bathroom before fleeing the house.

More like this
Twitter Can’t Handle Liz Truss & Kwasi Kwarteng’s Drastic Tax Cut U-Turn
By El Hunt
Chris Kaba's Family Continue Fight For Justice After Viewing Police Bodycam Footage
By Sophie McEvoy
'Line Of Duty’s Jed Mercurio Has A New Crime Drama In The Works
By El Hunt
What Is 'Pretty Wild' Star Tess Taylor Up To Now?
By Morgan Leigh Davies
Get Even More From Bustle — Sign Up For The Newsletter