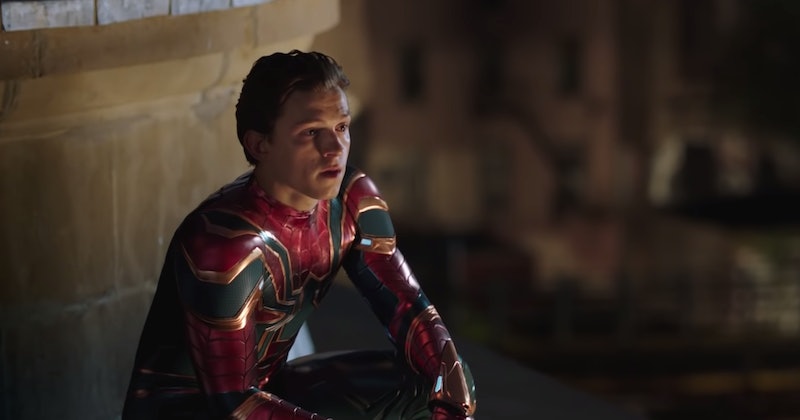 With all the hype of Avengers: Endgame still very much alive for fans, the newest Spider-Man 2 trailer hit everyone right in the feels. It shows what life is like post-Endgame for Peter Parker and how he has to live with the death of his mentor and idol, Tony Stark. But an exciting line in the trailer brought in the concept of multiverses, which begs the question, will Miles Morales be in Spider-Man: Far From Home?

In an interview with Fandango, Far from Home director Jon Watts gave some insight into whether Miles will be officially introduced in the MCU soon. "There is no Miles in this film," he teased. "Or at least not yet. But who knows? We edit these films down to the last second, so you never know.” Watts directed Spider-Man: Homecoming as well, which featured Donald Glover as Aaron Davis, Miles' uncle, so the connection is already there. Now with the mention of a multiverse, it's possible that Miles has powers that make him Spider-Man in another alternate timeline.

Fans have been buzzing about the possibility of a Miles Morales appearance in the MCU for years, and the hopes have certainly skyrocketed since the Far From Home trailer teased the multiverse in the MCU. In fact, even the official Spider-Man: Into the Spider-Verse Twitter account got in on the fun, tweeting what appears to be an image from the film with the words, "See you in another dimension." (Into the Spider-Verse, though not technically part of the MCU currently, is the first Miles Morales film.)

Watts wouldn't explain the rules of the multiverse and how it compares to the Spider-Verse, saying he'd let Nick Fury do some of that in the film. But he did give some insight into how it's connected to the events of Endgame. "We had to look at it in terms of the scope of what happened at the end of Endgame. Seeing all the crazy things that they did and all the questions that raises," he said. "So we're definitely trying to answer one of the big ones — alternate timelines. So many possibilities opened up at the end of Endgame, and Peter Parker is one of the few people on the ground dealing with them."

He also revealed that viewers will get to see even more, real-life impacts of the second snap, and how the world, specifically New York City, is going to deal with half the world coming back the same exact age they were five years prior. He also confirmed that all of Peter's main friends and key characters seen in the film did get snapped and came back, which is why they're still in the same high school class despite those years passing.

Moreover, Watts said, Peter Parker will be going through a bit of a hero's crisis. According to the director, as Spider-Man, Peter is being asked to really step it up this time around thanks to what he did in Infinity War and Endgame. "In the last movie, it was like he was ready to step up, but the world was telling him no. Now, the world is asking him to step up, and he's not sure whether he's ready for that level of responsibility," Watts said.

Spider-Man: Far From Home, which premieres July 2, is going to be the first MCU movie post-Endgame. And while fans got a lot of information in this trailer, Watts teased that it's only the start of the story. "You know, for a trailer that has a lot of stuff in it, it's just really scratching the surface."

More like this
Nicola Coughlan Shared A Lady Whistledown Excerpt From ‘Bridgerton’ Season 3
By Grace Wehniainen, Alyssa Lapid and Sam Ramsden
The New Bachelor Will Be Announced Next Week & Here Are The Top Contenders
By Grace Wehniainen
The 'Bachelor In Paradise' Schedule Shifts To 4 Hours Every Week After The Season 8 Premiere
By Brad Witter
The 'Andor' Timeline, Explained
By Gretchen Smail
Get Even More From Bustle — Sign Up For The Newsletter