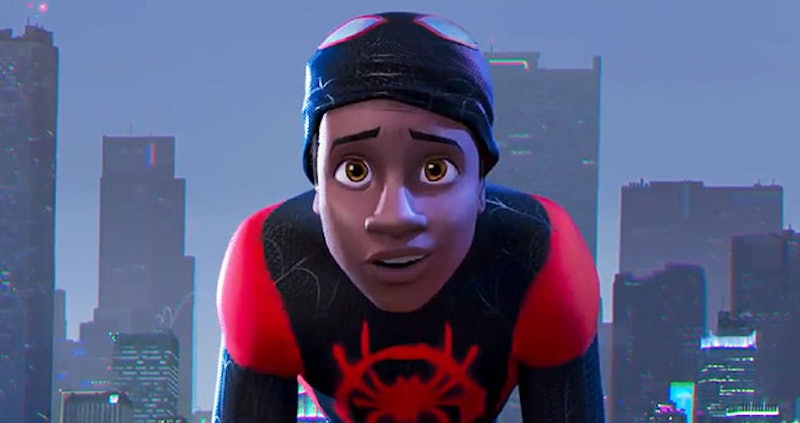 There's almost no Marvel Comics hero persona that hasn't been inhabited by more than one person over the course of its comic book life. The moniker of Captain Marvel was taken on by Kree officer Mar-Vell then Monica Rambeau before Carol Danvers took the name. The role of Captain America has been taken on by both Bucky Barnes and Sam Wilson. And Thor's hammer has been picked up by Jane Foster. Last year's huge animated success Spider-Man: Into the Spider-Verse had several Spideys co-existing at one time in a story centered on one particular teen. Now, the new Spider-Man: Far From Home trailer has fans are wondering if Miles Morales will be joining the MCU.

Miles Morales is one of many Marvel Comics characters who has become Spider-Man in the comics. Into the Spider-Verse revolves around how Miles, an Afro-Latinx teenager, starts to wear the mask after the main Spider-Man's tragic demise. In the process of learning about his new abilities, Miles interacts with Spider-People (and animals) from other dimensions of the multiverse, including Gwen Stacey as Spider-Woman, Spider-Man Noir, a pig named Spider-Ham and more.

The witty script and innovative animation earned Into the Spider-Verse a ton of acclaim. It comes in at a whopping 97% on Rotten Tomatoes, and, as Forbes writes, was "even leggier than Aquaman," at the box office. Spider-Verse went on to win the Oscar for Best Animated Feature at the 2019 Academy Awards, and has been hailed as a win for representation.

So with all of that success and praise, will fans be seeing Miles Morales in the live-action MCU any time soon? It's possible, even though Spider-Verse is made by Sony, not Marvel Studios/Disney, but it might be a while. Miles's presence in the MCU was hinted at during a scene in Spider-Man: Homecoming when Donald Glover's character, Aaron Davis, mentions his nephew, whom we know from Spider-Verse is Miles. A deleted, post-credits scene for Homecoming even has Aaron calling Miles on the phone. Then, later in 2017, Marvel president Kevin Feige confirmed to ScreenCrush that Miles exists in the same world, saying, "We definitely want you to go 'He's there. He's there somewhere.'"

Plus, the current MCU Spider-Man is apparently all for the idea of Miles joining the gang. As We Got This Covered reported during a junket prior to the release of Infinity War last year, Tom Holland said, "I'm sure we will [see Miles], down the line. It has to happen. I'd love to work with Miles, I think it would be great. We've definitely put the building blocks in. There's been a few teases in the first film... Miles Morales is another version of Spider-Man, and he is super cool. And he has different powers to Spider-Man, similar powers, and their storylines are intertwined."

The trailer for the next MCU Spider-Man movie establishes that franchise's own multiverse, apparently created by one of the snaps. This opens a door through which Miles could easily walk into another franchise, and even show up in a scene with Holland's Peter.

But even if Miles does join the MCU, don't expect his character to take over for Peter Parker in the role of Spider-Man any time soon. Holland is signed on for six Spider-Man movies, which, according to The Hollywood Reporter, are divided into three appearances in other films and three solo outings. Captain America: Civil War, Avengers: Infinity War, and Avengers: Endgame count as the appearances, with Homecoming and Far From Home filling in two of the three solo movies. That means Holland has yet another movie to come where he stars as Spider-Man.

However, there are definitely other ways for the MCU to introduce Miles Morales than by making him the MCU's Spider-Man right away. Perhaps as Peter Parker grows up, he could begin to mentor a younger Miles, much like his own mentor, Tony Stark did him. For now, let the fantasy casting begin.

More like this
Everything You Need To Know About ‘Black Panther: Wakanda Forever’
By Bustle Editors
Nicola Coughlan Shared A Lady Whistledown Excerpt From ‘Bridgerton’ Season 3
By Grace Wehniainen, Alyssa Lapid and Sam Ramsden
The 50 Most Powerful Characters In The Marvel Universe, Ranked
By Johnny Brayson and Nola Pfau
Lin-Manuel Miranda & Tituss Burgess React To 'Little Mermaid' Casting Backlash
By Radhika Menon
Get Even More From Bustle — Sign Up For The Newsletter