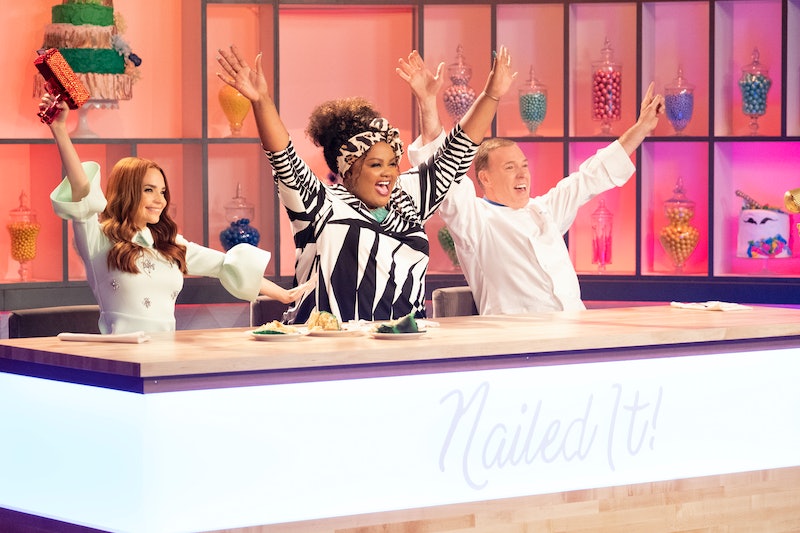 The panic buttons, crumbling creations, and battle to see who's the best (of the worst) amateur bakers in America continues with Nailed It! Season 3, premiering on May 17. Though the bake-off competition show made its Netflix debut a little over a year ago, fans can't seem to get enough of its frazzled bakers trying to re-create epic cookies, cakes, and other delicious treats created by top professionals. In fact, it makes for such a quick, entertaining watch, it won't take long before viewers are looking ahead to Nailed It Season 4.

Alas, Netflix has yet to officially green-light the series for more episodes, but it doesn't seem like it will be going anywhere anytime soon. Between the debut of Nailed It! Holiday last December and Nailed It! Mexico in February, the show has basically become its own franchise at this point, and it's easy to see why. Unlike more formal cooking shows, Nailed It! is relatable to those of us who can't follow any of those elaborate Pinterest recipes, so it's no surprise that people are tuning in for a good laugh. Hopefully, Season 3's hilarious jokes, cash-blasting, taste-testing, and wonderful host Nicole Byer can stave off fans as they wait for renewal news.

In addition, the six-episode season will feature pastry chef Jacques Torres lending advice about how to actually make pretty confections that also taste yummy. Per The Wrap, the format will remain the same: three contestants competing to win the $10,000 cash prize. The contestants' names and backgrounds are still unknown, but their challenges will include a "Black Panther" cake, a replica of the statue of David, and a T-Rex cake among other fun (and almost impossible) challenges.

And in case you were wondering how bad these cakes will look, the Nailed It! Season 3 trailer gives a sneak peek into the chaos. The clip starts off with an elaborate T-Rex and reveals one contestant's terrible re-creation, which looks like it's melting away. The trailer also shows contestants smashing bits of cake together, pouring batter down a drain, and dropping things all over their messy work stations as they hopelessly struggle through the challenge. Among the other challenges shown are a Marie Antoinette cake, Marvel hero cookie toppers, and one very creepy clown cake. And, of course, there's lots of laughter and frustration that, together, add up to another epically fun season.

Hopefully, Nailed It! will come back for a fourth season sometime this fall, and perhaps follow up with another holiday-themed season towards the end of 2019. Or perhaps they can shake it up a bit and even do a Halloween-themed special with spooky creations. Anything is possible, because there certainly isn't a lack of awful bakers in America, and we can all use more laughter in our lives, right?

For now, sit back, relax, marathon all the new Nailed It! episodes, and then wait patiently until Netflix gives the final verdict on the show's future. More than likely, it will be good news.

More like this
Netflix's 'Bling Empire' Season 3 Trailer Includes A 'Selling Sunset' Cameo
By Kadin Burnett and Sam Ramsden
‘The Ultimatum: Queer Love’ Is Officially On The Way
By Radhika Menon and Kadin Burnett
Here’s When You Can Expect More ‘Indian Matchmaking’
By Brad Witter
Here's How To Apply For 'Love Is Blind,' No Matter Where You Live In The US
By Grace Wehniainen
Get Even More From Bustle — Sign Up For The Newsletter