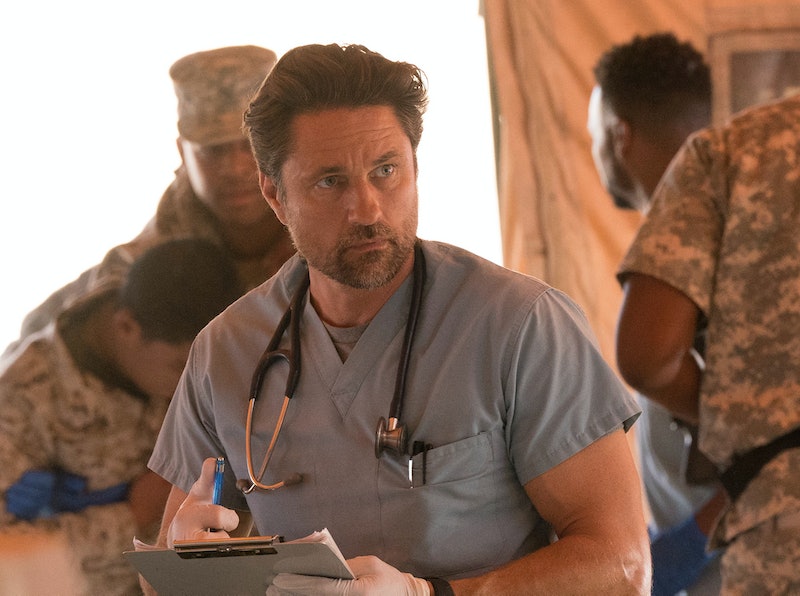 Since Grey's Anatomy's debut in 2005, fans have seen a lot of doctors come and go, and everyone can attest to the feeling of disappointment when yet another character exits the beloved series (still not over Cristina). Now, the time has come for yet another goodbye, this time to Dr. Nathan Riggs (Martin Henderson), who exited the show in the Oct. 26 episode. Luckily, Nathan was able to leave without dying in a plane crash or from a traumatic brain injury or some other natural disaster, which means that technically the door is open for Nathan Riggs to return to Grey's Anatomy.

The Oct. 26 episode was an hour-long flashback that focused on Nathan and Megan's love story, as well their individual relationships with Owen and Teddy, and the foursome's time together serving in Iraq. Throughout Nathan's time on the show, fans only caught a glimpse of what his life was like before Grey Sloan. This episode filled in the blanks and provided a few major details on everything that went down before Megan's kidnapping, including Nathan's first proposal to Megan (where he gave her another woman's necklace), and both of their infidelities.

The episode also cut to the present day to show Nathan making a home for himself, Megan, and Farouk in California. Despite Owen constantly trying to talk his sister out of moving, she did, clearly ready to start her new life with Riggs in Malibu. So what does this all mean for Riggs' time on the show?

According to what Shonda Rhimes told The Hollywood Reporter, the chances of Nathan returning are highly unlikely, but it's not out of question for her to work with Henderson again. "I loved that we were able to give Riggs a happy ending worthy of his character and talent," the series creator said. "As for Martin, this is not an ending for our relationship. He has been part of the Shondaland family since the pilot of Inside The Box and he will always be family. I can't wait to find a new project to work with him on in the future."

Henderson echoed Rhimes' sentiments about the fate of his character in an interview with Deadline. "I only had a short-term contract with the show. This is my final year, so I was expecting Nathan’s storyline to be wrapped up," the actor said. He continued:

"Bringing in Megan and tying up loose ends provided a reason. That was always intended when they brought Megan back with a twist. The triangle played out nicely, the way they gave perspective leading up to her disappearance, the mutual infidelity; the way it was handled was interesting. It’s been a couple of fun years on the show."

All this makes it pretty clear that the Oct. 26 episode marked the official end of Dr. Nathan Riggs in the Grey's universe.

During his time on the show, Nathan's character brought some much-need comedic drama, sort of like Mark Sloan — aka "McSteamy" — did a few seasons ago. Who could forget Nathan's awkward "love triangle" with Maggie? His decade-long intense feud with Owen? Or just how much he got under Meredith's skin when he first made his way to Seattle by overstepping boundaries? Good times. Nathan was a tad annoying at first, but, like Meredith was, viewers were also eventually won over by his charm.

This is why his exit hurts so much. He quickly became a fan favorite and balanced out the personalities of the other super serious doctors. So, it was sort of devastating to see him end up with Megan. Sorry, but a lot of viewers (me) just weren't that invested in her storyline or their previous relationship to care about their happy ending.

While obviously no one will ever get over Derek's death, Nathan's presence in the Grey's universe gave fans a sliver of hope that Meredith might finally get to be happy again. And, let's be honest, their chemistry was undeniable. But alas, what is happiness on Grey's? Clearly, not something that exists for the core characters.

While it's a tough pill to swallow — as Grey's Anatomy has seen too many doctors leave already — here's to hoping Martin Henderson gets to return to Shondaland in some capacity. Hey, maybe he can appear in the firefighter spinoff alongside Ben.