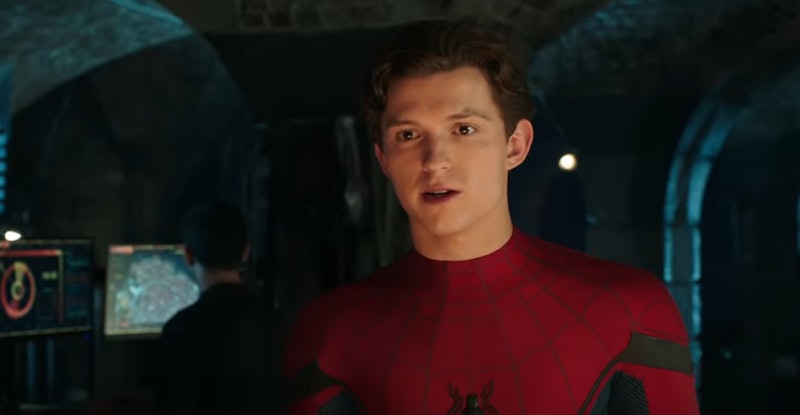 Spoilers ahead for Avengers: Endgame. There are a number of deaths in Avengers: Endgame that are going to reverberate throughout the MCU's coming movies. But none had as great an impact as the death of Tony Stark, a.k.a Iron Man (Robert Downey Jr.), had on Peter Parker, a.k.a Spider-Man (Tom Holland). And as we can see in the new trailer for Spider-Man: Far From Home, Peter still mourns Tony, and Iron Man is still an intense influence on Spider-Man's life. But how far does that influence go? How much of Tony's life might Peter try to emulate? Will Peter join Stark Industries? Will he become a tech mogul just like Tony? Or will he go all the way? Will Peter become the next Iron Man?

The trailer for Spider-Man: Far From Home offers up a lot of hints that Peter might be fit for taking the job. First, there's the suggestion from Happy (Jon Favreau), Tony's long-time assistant, that Tony's death shouldn't discourage Peter from continuing to be a hero. "I don't think Tony would have done what he did if he didn't think you were going to be here after he was gone," Happy says. Then, there are the police officers who ask Peter, "You going to be the next Iron Man, now?" And finally, Peter's own admission that "The world needs the next Iron Man."

Much of that seems to suggest that Peter Parker might be taking over as Iron Man in the MCU. Peter and Tony do have a lot in common, after all. They both have parental stuff to deal with. They're both super smart in the realms of technology, math, and science. And they both have heroic instincts. But Peter's always been a "friendly neighborhood Spider-Man" kind of guy. He doesn't have grand visions of being the center of attention, and the trailers released for this movie seem to suggest that Peter is really, really aching for a normal high school experience. He just wants to go on his trip and be with the girl he likes; he isn't really into the idea of going to outer space again any time soon.

So while the new trailer may raise the possibility of a Spidey takeover of the Iron Man suit, it doesn't seem likely. But someone has to take over as Iron Man, right? Thankfully, the MCU and Marvel Comics world have already offered up a few other options. First of all, the idea that James "Rhodey" Rhodes, a.k.a. War Machine (Don Cheadle) would become the next Iron Man has been floating around the fandom for quite some time. He already has experience using Stark's tech, and the end of Avengers: Age of Ultron seems to seed that story. Plus, the MCU needs more lead heroes of color.

Meanwhile, the latest Iron Man in the comics is a young black woman. In 2016, Marvel Comics introduced Riri Williams, a 15-year-old MIT student and tech genius who built her own Iron Man-like suit in her dorm out of parts discarded by Stark Industries, earning herself the attention of Tony Stark, but getting her kicked out of MIT as a result. Riri goes by the name Ironheart, and much like Peter Parker, becomes a mentee under Tony.

But the MCU hasn't yet introduced Riri Williams onscreen, and the role of mentee to Tony Stark has already been filled by Peter. So where does that leave the next Iron Man? Look no further than Princess Shuri of Wakanda. Shuri has all of the right qualifications to become the next Iron Man. She's incredibly smart, daring with her inventions, technologically savvy, and brave. Seeing her bust out of her lab sporting those robotic hand weapons in Black Panther was a cheer-inducing moment. And Shuri sporting the Iron Man suit, or her own, would be the MCU's way of paying tribute to Riri Williams without adding another new character to the films.

But whoever becomes the next Iron Man, be it Peter Parker, Rhodey, Shuri, or no one, it's pretty clear that the loss of Tony Stark is going to have a lasting effect on the remaining Avengers. If the trailer for Spider-Man: Far From Home is any indication, Peter's grief and how he moves on is going to play a big part in his story to come.