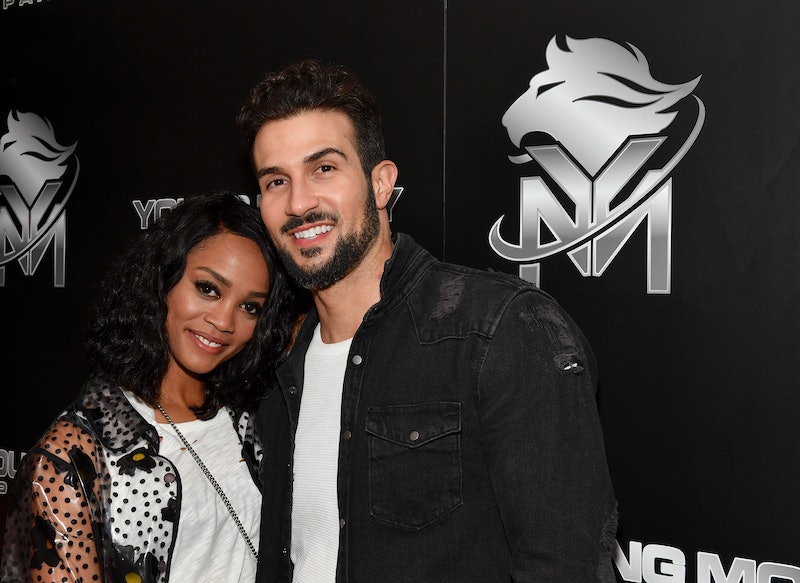 Ahead of Hannah B.'s Bachelorette season, ABC is celebrating with a 15th anniversary mega-Bachelorette reunion. The TV special will feature the return of many former Bachelorettes, including Rachel Lindsay. And considering Rachel and Bryan are getting married in 2019, it's an especially big year for her.

Rachel met Bryan on her season of The Bachelorette in 2017. They've been together ever since, and Rachel revealed on The Ringer's Bachelor Party podcast in January that they'll be officially tying the knot in August 2019. She didn't publicly say the date, but she confirmed her wedding won't be on the same day as another Bachelor Nation couple's — Ashley Iaconetti and Jared Haibon. (Ashley and Jared's wedding registry reveals their wedding date is August 31, 2019.) Based on an Instagram post that Rachel shared just a few days before The Bachelorette reunion, there's less than 100 days before her big day — which means that Rachel and Bryan's wedding will happen sometime in beginning to mid-August.

Their wedding will also be a destination one, since it's taking place in the Caribbean — which, as Rachel explained on Bachelor Party, is good because it will be easier for Bryan's family in Colombia to attend. At that time, she said she wanted the day to be a big party, and the couple told NBC's Access Live in February that their guest list was close to 150 people. Interestingly enough, that doesn't include anyone from Bachelor Nation. "We go back and forth," Rachel said of inviting people from The Bachelor franchise. "Right now, I'm saying no one because then it's just like, if you invite one, you have to invite the other one. You don't want to hurt feelings." She did concede that Chris Harrison is invited — but confirmed that he won't be officiating.

Leading up to the big day, Rachel and Bryan have been working with celebrity wedding planner Michael Russo, who's planned the weddings of high-profile clients including Kevin Jonas and Joey Fatone, as well as decorated the homes of Kathy Griffin and Shaquille O’Neal. Rachel also just picked out her dress, which she posted about on Instagram on April 16. For that, she worked with Randi Rahm, who designed the dress Rachel was wearing when she met Bryan and the one she was wearing when he proposed.

While Rachel and Bryan's wedding won't be a Bachelor bash and the details have been pretty scarce, it will surely be a topic of conversation on The Bachelorette reunion. You'll have to watch to see if Rachel will reveal any more about her walk down the aisle. But if not, her Instagram is a pretty safe bet for updates.

More like this
Here's Exactly When Rachel & Tino's Fight Happened After 'The Bachelorette'
By Grace Wehniainen
Clayton & Susie Broke Up, Citing "A Significant Amount Of Pain" After 'The Bachelor'
By Jordyn Tilchen
Kesha Is Down To Be The Next Bachelorette
By Jake Viswanath
Kira's Post-'Bachelor In Paradise' Activity Has Included Travel, TikTok, & Tea
By Grace Wehniainen
Get Even More From Bustle — Sign Up For The Newsletter