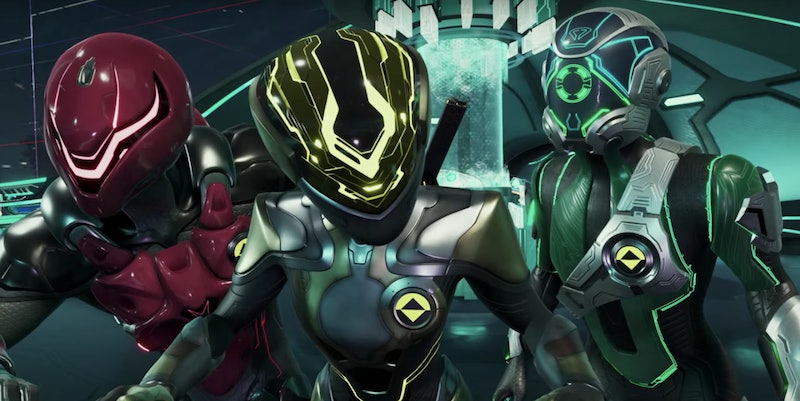 So, '90s babies have reason to celebrate. ReBoot is umm… getting a reboot. Netflix is coming out with ReBoot: The Guardian Code, based on the Canadian series ReBoot. The logical next thought then, for fans of the original, is to wonder if ReBoot: The Guardian Code will return for Season 2. A reboot of a reboot of ReBoot, if you will. However, as of yet, there is no indication that there will be a second season of the series, which already looks vastly different than the one fans may remember.

The Netflix version is a mix of both live-action and CGI animation, where as the original was exclusively CGI. In addition, instead of focusing on the characters in the virtual world of Mainframe, there is a focus on four, new high schoolers that find their way into that virtual world.

Clearly, this is a wholly new viewing experience. However, in an interview with Round House Radio, president and chief creative officer at Rainmaker Entertainment, Michael Hefferon, said the show would have roots in the original series. “We certainly would be reaching out to the original creators of ReBoot and people that were involved to come back as a reunion show to finish the original off. We would probably look to do a special video conclusion of it,” he said. “This is very much inspired by the original ReBoot, it certainly is rebooted, not meant to replace it, just further the cool experience and hopefully pay great homage.”

Like Hefferon teased in the Round House Radio interview, “There is a point where our new Guardians meet Bob and the original ReBoot group.” That moment would appear to come at the very end of the first season of the series. Looking at the official website for Reboot: The Guardian Code, shows a synopsis for each of the 10 episodes in Season 1. Episode 10’s synopsis reads: “With Trey away at a basketball game, Vector, Enigma and Googz investigate and encounter original ReBoot characters Bob, Dot, and Enzo, in Mainframe.” That confirms that the original heroes of the series will be making their appearance, but it remains unclear just how they will fit into the story.

And, as SyFy Wire notes, there is going to be an opportunity to get a refresher on the original ReBoot, or even watch it for the first time if you somehow missed out. All of the original ReBoot episodes are available to stream online.

ReBoot only just premiered on March 30, but it already has some critics. After the trailer for the new series released, a writer for io9 used words like “questionable” and “hokey” to describe it. He wasn't the only one to be critical of this new series. A writer for Engadget used similar language to describe the series, using the phrase “terrible-looking” and calling it “a far cry from the original.”

Instead of seeming like a continuation of the series, some commenters on the trailer felt that it was a bit of a Frankenstein’s Monster-mix of different shows ranging the gamut from Power Rangers to Code Lyoko to the new Jumanji reboot. While it may be too early to say for sure, it seems that ReBoot: The Guardian Code may have a bit of an identity crisis on its hands, at least as far as viewers are concerned.

When it comes down to the future of a TV series, it really is all about the fans. If there are tons of people who want to watch a show, usually that’s a pretty good indication as to whether or not there will be more episodes made. But, whether or not ReBoot’s '90s-era fanbase wants to watch this rebooted ReBoot remains to be seen. If it does get renewed though, expect a spring 2019 premiere date consistent with Netflix's one year between projects. And, if this reboot doens't float your boat, keep an eye out for the next reboot of ReBoot — in today's nostalgia-driven society it's really just a matter of time.

More like this
Netflix Shut Down 'Bridgerton' S3 Rumours About A “Very Dark” Storyline
By Bustle
Ashton Kutcher Wants Danny Masterson “To Be Found Innocent” In Rape Retrial
By Jake Viswanath
All The ’70s Easter Eggs You Missed In 'That ’90s Show'
By Grace Wehniainen
At 28, Debra Jo Rupp Was Living A Much Different '70s Show
By Grace Wehniainen
Get Even More From Bustle — Sign Up For The Newsletter
From hair trends to relationship advice, our daily newsletter has everything you need to sound like a person who’s on TikTok, even if you aren’t.