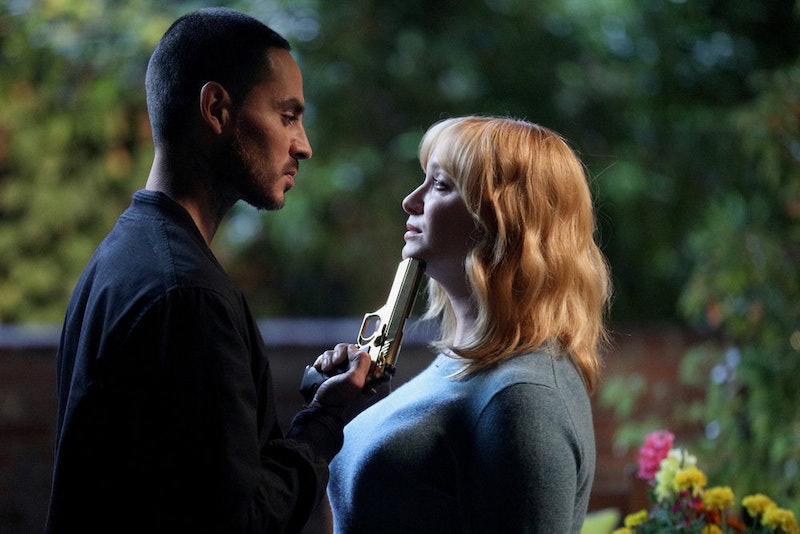 Spoilers ahead for Good Girls Season 3, Episode 2. Beth may have thought she was free and clear of Rio after shooting him in Good Girls' Season 2 finale, but he survived — and he's back with a vengeance. It's unclear what will happen now that he's tracked her down, but Beth seems to think Rio will kill her: when he sidled up to her at the bar in the show's Feb. 23 episode, she looked like she was going to pass out.

It's not outside of the realm of possibility. Beth did, after all, shoot Rio three times, and he doesn't seem like the kind of person to let that slide. He also just orchestrated the deaths of Agent Turner and several other FBI agents, so he's certainly capable of that level of violence — even if he's not carrying out the deed himself.

If Rio does intend to kill Beth, though, he likely won't do so right away. If he really wanted her dead, he would've just killed her already. And Good Girls star Manny Montana isn't sure it will even come to that. "I don't think NBC would ever allow it," he tells Bustle. "The threat is always gonna be there...[and] I think somebody's gotta go at some point, but I don't know."

The matter is complicated by Beth and Rio's sexual history, as it's never been clear if Rio genuinely cares about Beth, or if he sees their relationship as strictly transactional. Whichever the case, Montana doesn't think Rio will go down that road again. "He slipped up a bit and trusted her a little more [than he should have]," Montana says. Though there will always be a natural chemistry between the two, acting on it again, "would make Rio very weak," he says, "because this woman shot him three times. There's no coming back from that."

Still, Montana hopes they'll be able to preserve their professional relationship. "I would want them to have a common enemy at some point," he adds. "I think they can co-exist. I don't know how long it can remain peaceful, but I think they can work together."

Rio isn't likely to forget that Beth tried to kill him, but some part of him may respect that she had the nerve to do so. It even seems possible that the two will end up in business together again — if Rio decides he can trust her. That may leave Beth on edge for a while, but that's a small price to pay considering the alternative.

More like this
'Grey's Anatomy's New Intern Got Advice From Dr. Bailey Herself
By Grace Wehniainen
Here's What Jeffrey Dahmer's Dad Has Said About His Other Son, David
By Grace Wehniainen
Where Is Lionel Dahmer Today? Jeffrey Dahmer’s Father Reflected On The Serial Killer’s Death In 2020
By Brad Witter
'Reservation Dogs' Season 3 May Finally Mend Bear & Willie Jack’s Relationship
By Gretchen Smail
Get Even More From Bustle — Sign Up For The Newsletter