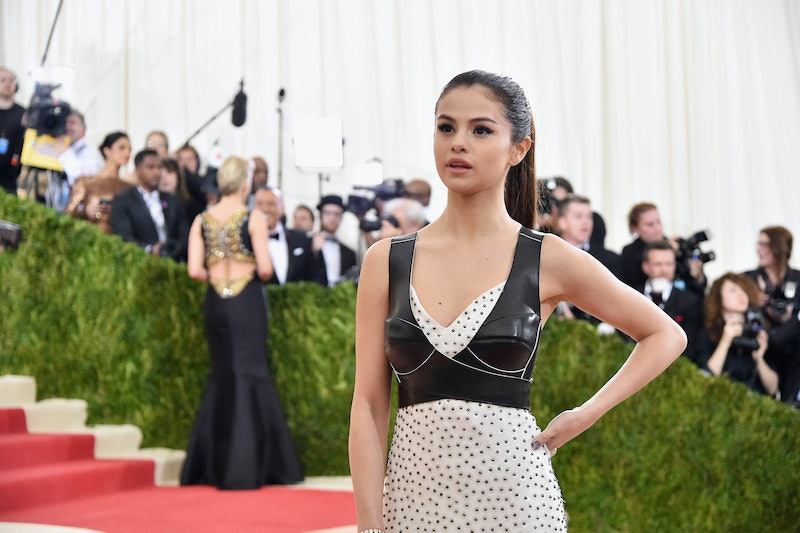 She's had quite the busy social calendar over the past several months — so, will Selena Gomez be at the 2017 Met Gala? Between her major success as an executive producer for Netflix's 13 Reasons Why, her powerful speech about her mental health issues at the American Music Awards, and a brand new album potentially in the works, it's safe to say that the star has had a full plate lately — does slaying red carpet at the Metropolitan Museum's Costume Institute Gala factor into all of that?

Well, as the case may be, signs most definitely point to yes — according to Just Jared, Gomez took a red eye from Los Angeles to New York last night. She was also spotted in New York, sporting majorly stylish street style in a Met Gala theme-appropriate Comme des Garçons-esque outfit. Nothing's official yet, but it is worth noting that she's attended the past three years in a row — she wore kicky Louis Vuitton for last year's Manus x Machina: Fashion in the Age of Technology theme, a beautiful orchid headdress for 2015's China: Through the Looking Glass, and a timelessly glamorous gown for her first time at the event, at Charles James: Beyond Fashion in 2014.

This year's theme, Rei Kawakubo/Comme des Garçons: The Art of the In-Between, offers even more room for fashion forward creative license — so hopefully, we'll get to see Gomez's interpretation this time around too.

It's also worth noting that this could be the perfect opportunity for Gomez and The Weeknd to make their relationship red carpet official — he's rumored to be attending despite an ongoing concert tour. Last year, he attended with then-girlfriend Bella Hadid, and made quite the fashionable impression — so it stands to reason that he and Gomez could potentially take on this year's Met Gala as a couple.

Are you hoping to watch Selena Gomez and The Weeknd ascend those iconic red carpeted steps to the Metropolitan Museum of Art? Fingers crossed!