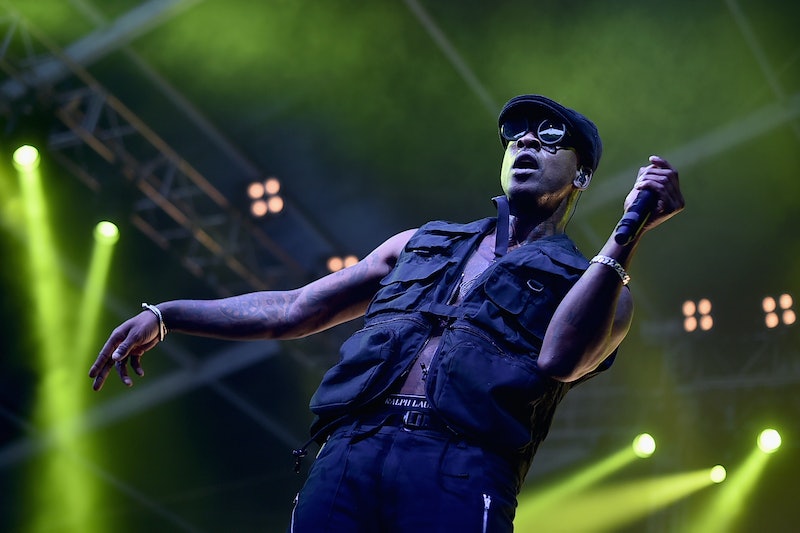 While grime music mostly remained underground during its come up in the early millennium, it's since exploded into the mainstream with the likes of Wiley, Stormzy, and Skepta, who've elevated the genre to its current chart-topping status. Skepta in particular has had quite the ride. While his music didn't reach too far outside of his grime circle in its inception, he's since gone on to take home the Mercury Prize, and score a UK top 10 single. Now, with a new album on the way, it's time to ask: will Skepta tour in 2019? Because you don't want to miss out on experiencing one of the artists whose work has come to define the genre.

According to his official website, Skepta's got a fair bit going on. He's set to appear at some of the hottest festivals this summer, across the UK and beyond, beginning with a headlining slot at Ireland's Forbidden Fruits Festival on Saturday, June 1.

He's then off to play another headlining set in his homecity of London at Field Day on Friday, June 7. If you want to join him abroad, then you'll also be able to find Skepta at Poland's Tauron Nowa Muzyka on Saturday, June 22, or Denmark's Roskilde festival on Wednesday, July 3, as well as Down The Rabbit Hole in The Netherlands on Friday, July 5, and Dour in Belgium on Saturday, July 13.

He'll then be bringing his show back a little closer to home, when he plays Manchester International Festival on Wednesday, July 17, before going overseas once more to play some late summer shows at Spain's Sonar Festival on Saturday July, 20, and Germany's Melt Festival for his final festival show on Sunday, July 21. So, it looks like it's a busy summer for the performer.

But aside from all the festival appearances, can you expect to see a fully fledged tour from Skepta in his own right this year? Well, if there is one in the works, it's yet to be announced, so I've checked in with one of Skepta's reps to see if they can give anything away. Watch this space.

It's my guess that a tour from Skepta this year could be quite likely. He has got an album coming out after all — and soon. On April 28, he announced that his sixth album Ignorance Is Bliss would be out on May 31, as NME reports, and on Friday, May 10 he unveiled two tracks from the album, which were uploaded onto his YouTube channel. The first single 'Greaze Mode' features rapper Nafe Smallz, while the second 'Bullet From A Gun' showcases grime at its best.

If Skepta has a similar touring schedule to his last album Konnichiwa, then you can expect a tour announcement very soon. Konnichiwa was released on May 6, 2016, and its tour began three days later in London, according to Setlist.FM. So I'm hoping his tour in support of Ignorance Is Bliss will follow a similar pattern.