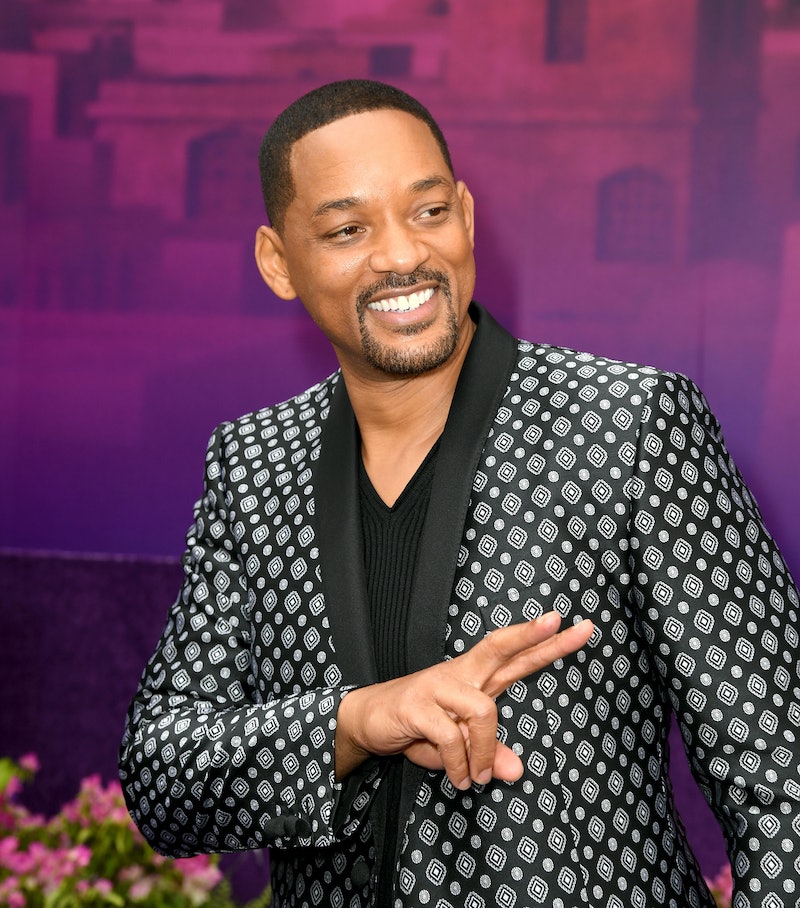 Some things from Disney movies have proven to be fiction, but one thing that remains true is that you have never had a friend like the Genie from Aladdin. Or in this case, Will Smith, who takes on the iconic role in Disney’s new live-action remake, out in theaters on Friday, May 24. And the Genie's look isn’t the only thing that received a makeover from the actor. Will Smith teamed up with DJ Khaled for a "Friend Like Me" remix, and it's quite something. Originally sung by the late Robin Williams, the track is incredibly catchy, and yet, Smith and Khaled might have made it even more addictive.

The new take on “Friend Like Me” will play during the end credits of the new Aladdin, and it definitely adds a lot of old-school hip-hop flair to the Genie’s signature song. Smith went back into his ‘90s rap roots for the track, adding some saucy lines like, “Just a lamp and a rub away from whatever you want,” into his rapid-fire verses, sure to thrill everyone who was a fan of his flow on The Fresh Prince of Bel-Air or his classics with DJ Jazzy Jeff. Ever the loyal hype man, DJ Khaled mainly lends some moral support on the remix, yelling his signature catchphrases (“another one”) and echoing Smith’s empowering words, as one does.

“I went into the studio the first day and I really wanted to play with it to see if I could add something to it,” Smith said about the track in a press release, as reported by Billboard. “Literally 30 minutes in the studio, and started to play with the song [in] the 94/96 BPM range. That BPM range is right old school hip-hop. So I grabbed The Honey Drippers ‘Impeach Your President’ and I had them throw that breakbeat under there. I messed around with that," he revealed. "And I messed around with Erik B. & Rakim’s ‘I Know You Got Soul’ under ‘Friend Like Me.’ And I was like, ‘Oh my god, I’m home!’ I started playing with the hip hop flavor, and the Genie was really born in my mind from the music.”

Smith has been making the press rounds to promote Aladdin and revealed a surprising fact on Jimmy Kimmel Live that viewers might not catch on first glimpse: the blue Genie you see on screen is not actually him. “Blue becomes me. I enjoy being blue,” Will said to the audience. "What’s so interesting that people don't realize is, when I'm blue Genie, there's no part of that character that is actually me. It’s a 100 percent CGI character. It's totally created. It’s not my head.”

Of course, Kimmel revealed that as the film goes on, the Genie becomes more life-like (aka it’s actually the actor). But regardless of how the character was created, Smith loved playing him nonetheless. “It was such a beautiful experience, singing, dancing, rapping. There’s action and romance, drama and comedy,” he explained. ”30 years of things that I've cultivated as a performer, and all of them got used in this movie. If there had been a boxing scene, it would've been everything I've ever done.” There’s always hope that it could be incorporated into a sequel.