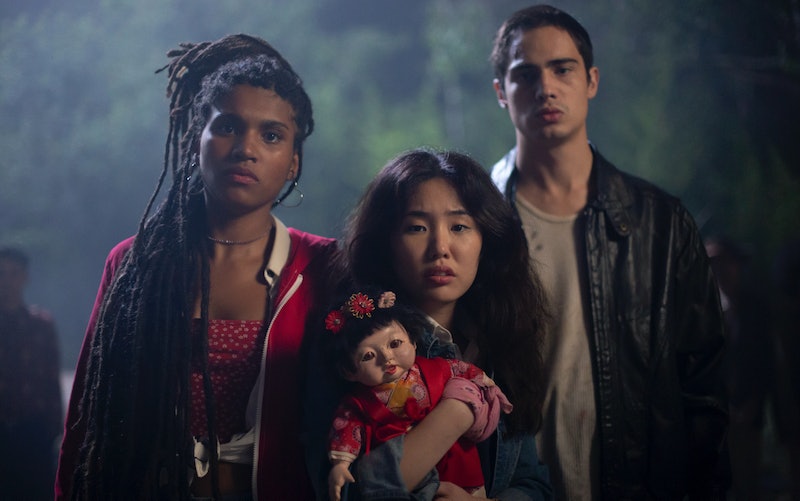 Though Netflix has yet to announce if Spectros will return for Season 2, horror fans will likely want more of the show stat. Hailing from writer-producer Douglas Petrie — who also executive-produced Buffy, Daredevil, and American Horror Story — the thriller follows a group of Brazilian teenagers who unwittingly get tangled up with supernatural forces.

The trailer features a flashback to 1858, where a Japanese woman is begging a priest to take a creepy looking doll she has. Just then, however, the door bursts open with something sinister behind it. Cut to present day, and the Annabelle-like toy winds up in the hands of Spectros' five young protagonists, apparently ready to wreak havoc once again. "The three of you pissed off some very powerful people when you stole that stuff," a women tells them, pointing to the doll.

According to The Hollywood Reporter, this havoc is that dead people are being resurrected all over São Paulo's Liberdade district — and they're out for revenge. "Spectros is an awesome mashup of Brazilian folklore and real-life history, mixed with elements of the scariest Japanese ghost stories we could find — all played out on the colorful streets of Liberdade and seen through the eyes of teenagers," Petrie told the outlet when the series was announced in 2018.

Whether that's enough to bring the series back, we'll have to wait and see.