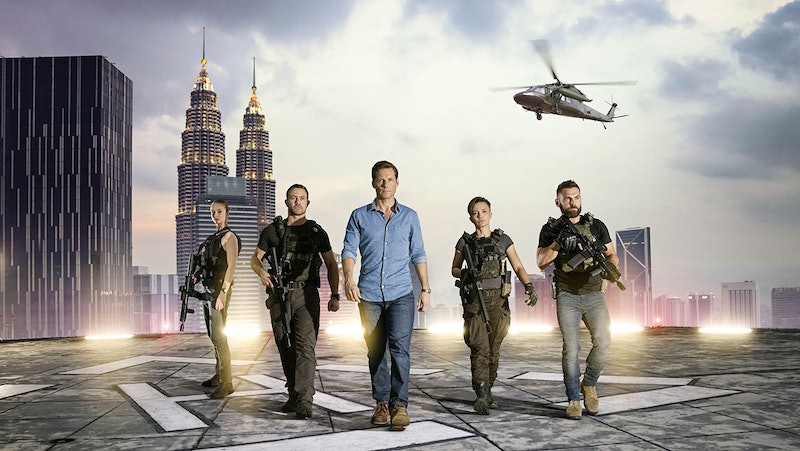 Do you every feel like all you need is some sort of a fusion of 24, Homeland, and like the news? The best kind of TV is the kind that keeps you gripped from start to finish and brings the dramz in droves. So if it's action and droves of dramz you crave, I bet you have already hit up Strike Back. The seventh season of the show kicked off earlier this year and, as it wraps up the question on everyone's lips is: will Strike Back return for Season 8?

Fans will be ecstatic to hear that before the seventh season premiered it was confirmed there would be an eighth season of the show made by Cinemax and Sky One, as Digital Spy reports. However, just like the show itself, this news has a serious twist. Yes guys, an effing twist.

So it seems that sadly the eighth instalment of all the action will in fact be the last ever season. I know, don't cry. Speaking to Digital Spy about it the show's creator Jack Lothian explained how they're going to do the final adventure justice.

"I am delighted we're coming back for a final season. Strike Back is a show that's always raised the bar for small screen action, and we're looking forward to doing that one last time. There are plenty of twists and turns ahead, but I can promise one thing — we’re going out with a bang," he said.

As Entertainment Focus reports, Sky also confirmed that the production of the show will begin in May of this year. The initial filming will be in Croatia and will be summing up the adventures of the Joint Special Operations Command Team. And this time it's for real guys. Previously they ended a season by killing off main characters but what did they do two years later? They hired a new cast and got to it again.

Jamie Bamber, who is known for his turn in Battlestar Galactica, stars as Special Operations Command's Section 20 boss, Colonel Alexander Coltrane. TBH they haven't confirmed if he will be in the final season, but one thing that is clear is that he has super enjoyed playing Coltrane. I mean, the guy is low key James Bond-esque in his fabulosity. However, fact is that the colonels in this show don't have a great shelf life, as Bamber explained when he spoke to Digital Spy.

"I was aware of the fact that commanding officers don’t tend to get treated very well within the story... none of them were still around! There's the Damocles sword hanging over you from day one".

And when he refers to 007, he isn't wrong. This show packs an awful lot of action into each of its hour long episodes. However, as Bamber told Collider, it's not all about one agent.

"It’s the team television version of James Bond. They seem to get it right when they have to, they react right under stress, they rag on each other, they’ve got some good one-liners, and we tell a story. We certainly reflect back to what’s going on in the world, in terms of the bad guys we run into. It’s fun, and I think it should be fun," he said.

Although no release date for the final season has yet to be announced, sounds like with this crew it will be entirely worth the wait.