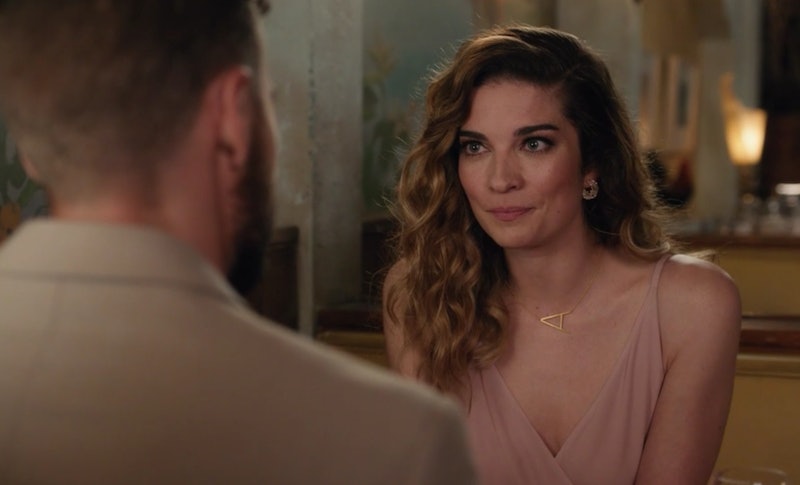 Spoilers ahead for Schitt's Creek. It would be a bit too convenient, perhaps, for both Alexis and David to end up in committed relationships in this final season of Schitt's Creek. In that case, even though Ted and Alexis may get back together by the end of the season, their emotional goodbye in Episode 8 felt like the perfect ending to their on-again, off-again relationship.

Since the beginning of Season 6, Ted has been in the Galapagos as part of a research team. But over the past few episodes, his Skype conversations with Alexis have been shorter and less frequent — his dad jokes more stilted. In many ways, their breakup seemed inevitable. So it may have come as no surprise when, in the Feb. 25 episode, Ted shows up on Alexis's doorstep, saying he wanted to have this conversation in person. (He would have come earlier, but he drank some spoiled milk on his second connecting flight.)

The small-town veterinarian was offered a full-time position on the research team down in Ecuador, he explains, which is a three-year contract. As a result, they're faced with three choices: Either Alexis moves down to the Galapagos, he turns down his dream job, or they break up. Commendably, the couple chooses the latter.

"You're building something special here, Alexis, and you deserve to see where it takes you," Ted says, kindly. He, meanwhile, is still on the hunt for what Alexis calls "those gross little flies," which are part of the evolutionary puzzle. Indeed, their lives are headed in wildly different directions, and it would be selfish to hang on to each other. So, they do the mature thing and quit while they're ahead.

That doesn't mean their relationship was not all for naught, though. "I'd like to think that we helped each other get here," Alexis tells her now ex-boyfriend, without a trace of selfishness in her voice.

"I know that we did," Ted responds.

Indeed, they've come a long way since Alexis "proposed to postpone the proposal" back in Season 2, breaking up with Ted for Mutt. And although Ted eventually moved on with Heather, A local farmer, it was clear that he'd never stopped caring for his globe-trotting ex-girlfriend.

They've gotten back together before, so it's not impossible for them to do so again, but fans shouldn't hold their breath. "When you get on that plane tomorrow, I want you to know how grateful I am to have met you," Alexis tells Ted. We are grateful to have met them, too.