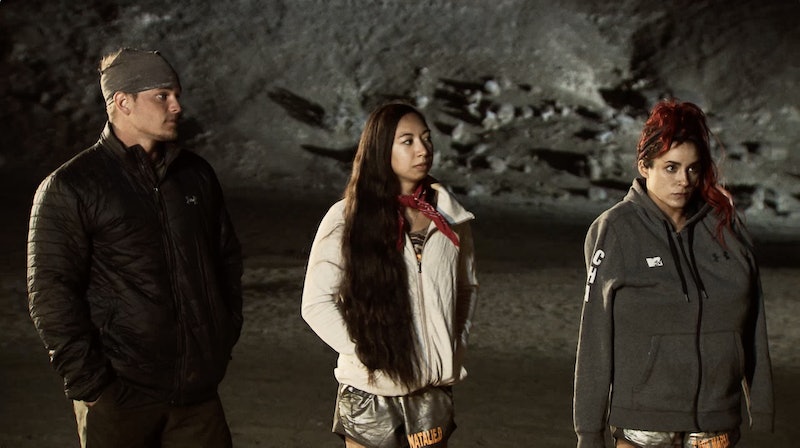 Though there hasn't been any official word on Season 34 of The Challenge, the competition show probably isn't going anywhere anytime soon. The Challenge has been on for so long that it's basically a staple of MTV, and it's hard to imagine the network without the series' wild cast members and daring competitions. Even before Season 33, aka War of the Worlds, winds down, rumors of the next batch of episodes are swirling among fans.

Viewers likely won't have to wait long for The Challenge to come back — there are typically two seasons every year, the second of which typically airs in mid to late summer. And if rumors are true, the next season has already begun filming. Inquisitr reports that the cast and crew are allegedly headed to Thailand for their latest competition, though none of that has yet been confirmed by MTV.

Twitter has been buzzing with all the longtime favorites and relative newcomers that fans are hoping to see when The Challenge does return — the series has a habit of bringing back reality TV royalty who make a big splash.

Here's a few choices people are really pulling to see next season:

Angela is an alum of Oxygen's Bad Girls Club and MTV's Ex On The Beach, and appeared in Season 32 of The Challenge. She didn't get a win during her only season, and some fans are pulling for her to come back for another try.

Mattie not only appeared on the most recent season, but she's also an alum of CMT's now-cancelled Party Down South. She went down in the first half of this season's finale, but could very well be back to redeem herself in Season 34.

Derrick is a huge player in Challenge history. He's participated in ten seasons, and won three of them altogether. Some have hailed him as in the top players to ever be on the series, and his return would certainly be exciting.

Da'Vonne was originally a Big Brother competitor before showing up on The Challenge for both Final Reckoning and War of the Worlds. She's amassed quite a following on social media and fans definitely want her back for more seasons.

Another loooooongtime competitor, Cara has won two seasons of The Challenge and been in the finals about half a dozen other times. The jury's still out on how she'll fare in the back half of this season's finale, but whatever happens might have her energized for another season.

These are just a few of the fan favorites who might find their way back to the show for a potential 34, and it'll be interesting to see who enters into whatever theme is chosen next. Producers have said before that the theme is usually set before the cast is chosen, and from the sound of it, it's usually meant to keep surprising viewers and competitors. "Our favorite thing is when the cast hears [the theme] and goes, 'Oh my god! We didn't see that one coming!'" executive producer Scott Freeman told E! News. "We'll even see [longtime competitor Johnny] Bananas go, "Hmmm…" He has that look like, 'You even surprised me! Well played!'"

In that spirit, who knows what could be on the horizon for The Challenge's fanbase. All of these competitors could return, or maybe none of them will — but whatever happens, it's sure to be dramatic.

More like this
Here's The Full List Of Zach's Confirmed & Potential 'Bachelor' Contestants
By Kadin Burnett and Grace Wehniainen
Everything To Know About 'RHONJ' Season 13
By Brad Witter and Jake Viswanath
Netflix's 'Bling Empire' Season 3 Trailer Includes A 'Selling Sunset' Cameo
By Kadin Burnett and Sam Ramsden
‘The Ultimatum: Queer Love’ Is Officially On The Way
By Radhika Menon and Kadin Burnett
Get Even More From Bustle — Sign Up For The Newsletter