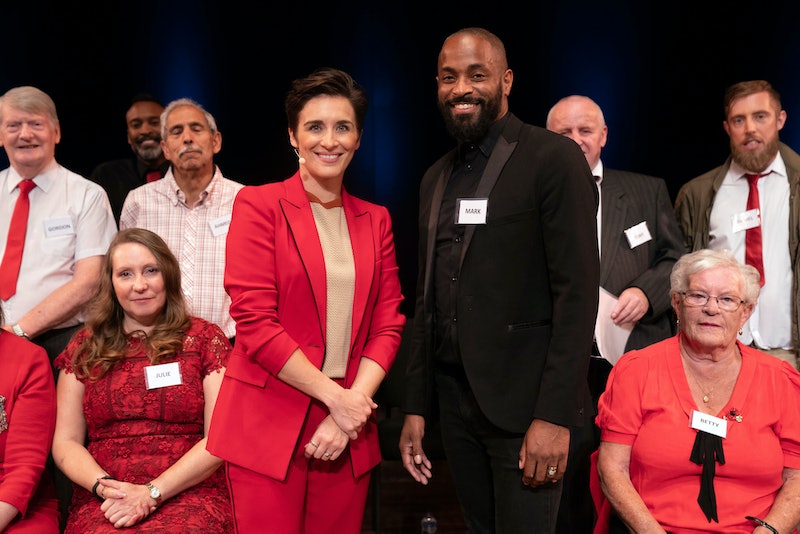 Choirs and causes have gone hand in hand for a while now. Singers across the country have been congregating together, and making a name for themselves, as they've sung their hearts out in homage to war veterans or missing persons. In this instance, the choir sings to rekindle memories, as those involved are all suffering with dementia. If you've been in awe of BBC1's Our Dementia Choir, which sees Line Of Duty's Vicky McClure in the role of host, then I'm guessing you've been tempted to take the emotional experience one step further, and you've been asking: will the Dementia Choir tour the UK?

While there's not been any word of a potential tour yet, I imagine that news of one will be revealed in due course, especially since the choir's recently accrued a huge amount of popularity because of BBC1's documentary on them. Ever since it premiered on BBC1 on Thursday May 2, 2019, Our Dementia Choir has been hitting the nation with an emotional gut punch, as well as inspiring awe, and revealing the true magic of music. The two-part documentary concludes on Thursday May 9 at the same place and time of 11.35 p.m., and I'm hoping tour dates will roll out shortly after. I've checked in with one of the show's reps to see if that'll be the case, so make sure to watch this space in the coming weeks.

The 18-strong choir in this show is made up of people living in and around Nottingham, where McClure grew up, according to the BBC, and each of its members have been living with dementia in various forms. While "there's growing evidence that music can help ameliorate symptoms such as depression and agitation," according to the site, Our Dementia Choir seems to make that evidence stark, as the magic of music has inspirited the choir, and no doubt those watching them, with a kind of joy that only music can evoke.

BBC's documentary of the choir not only exists in order to pull heart strings, but to help fuel research into the idea that music might be able to affect those suffering with dementia. Sebastian Crutch, a professor of neuropsychology at the Dementia Research Centre, University College London, has written several papers on the link between music and dementia, according to his UCL staff page, and it's his study that inspired the idea behind Our Dementia Choir.

According to Nottinghamshire Live, the study is close to McClure's heart, as she's experienced dementia firsthand through her years spent caring for her grandmother who suffered with the condition. Sadly, McClure's grandmother reportedly passed away in 2015. The actor hinted to the paper on Tues, May 7, that there could be much more of the choir to come, as she said: "It's a case of I'm not going to do one documentary about dementia and that's my job done." Adding: "There's a long way to go."

Our Dementia Choir might only have touched the surface of some recent and potentially revolutionary research, but I hope its singers continue to experience the magic of music together long after the show ends.

More like this
At 28, Melanie C Was Falling In Love & Reclaiming Her Confidence
By Olivia-Anne Cleary
Girls Aloud Announce Primark Collab In Honour Of Sarah Harding
By Sophie McEvoy
Stormzy Made A Passionate Speech About The Importance Of Diversity
By El Hunt
Snoop Dogg & Michelle Pfeiffer Lead Moving Tributes To Coolio
By El Hunt
Get The Very Best Of Bustle/UK