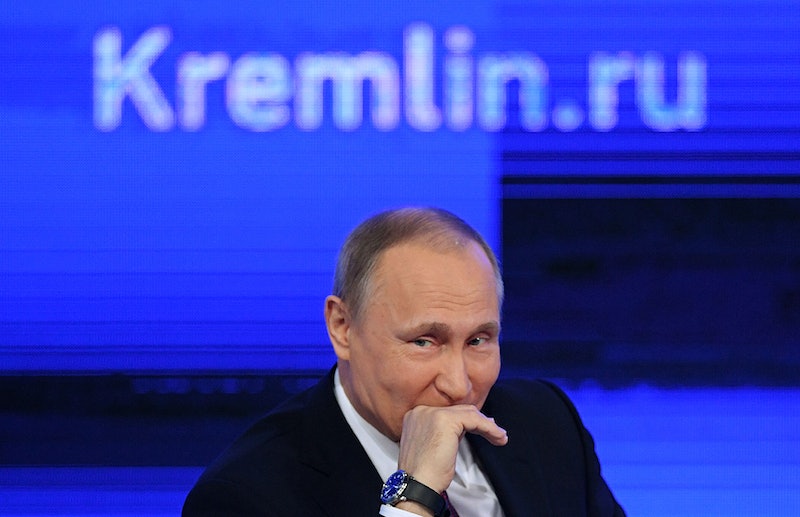 In Donald Trump's world, there are a lot of bad guys. He's been pretty clear about one thing, though: Russian President Vladimir Putin is not one of them. Now, with new cautions from European leaders and unverified allegations of potentially devastating material in Russia's possession, will anything make Trump believe that Putin is not to be trusted? Will the President-elect finally admit that his favorite strong leader is not an individual who has his and his country's wellbeing in mind?

Unfortunately for the country that Trump is gearing up to lead — and the countries in Russia's former sphere of influence, and the post-World War II world order — the answer seems to be no.

On Tuesday, the Washington Post published a letter from current and former government officials in Central and Eastern Europe to Trump and his transition team, urging caution when dealing with Russia. These officials come from all over the former Eastern bloc and elsewhere, including Poland, the Czech Republic, each of the three Baltic States (Estonia, Latvia, and Lithuania), Slovakia, Hungary, and Bulgaria, the only country whose current president signed the letter.

These are countries who have had the pleasure and responsibility of seeing Russia's actions close hand, whose recent histories were in many ways shaped by the actions of the Soviet Union, and their reactions to it. They have the full political and historical context to work with, so they should really be taken seriously when they say that "Putin does not seek American greatness."

These countries have already witnessed Russian propaganda campaigns in their national media, with some still ongoing. They saw up close what happened in Ukraine, and they're worried that a close Putin-Trump friendship could lead to Russian advances into their own countries. These are the countries bound to the U.S. by NATO — which Trump doesn't seem to care too much about.

Trump may not immediately recognize where these people are from or how to pronounce their names, but someone on his team needs to point out that they're offering him a wealth of well-meaning information. And yet, he and his team have not even publicly acknowledged that they received the letter, and they have certainly not responded to it.

However, this letter was small beans compared to the unverified allegations published by BuzzFeed about Trump's extensive connections to Russia, denied by both Russia and Trump. Trump did respond to that, releasing a flurry of tweets about how it was fake news. Not only does this yet again call into question his choices of whom to trust, but it also reveals his inability to even understand the term "fake news."

The report might be totally fiction, which would retroactively justify his lack of a response to it up until now. What's definitely not fake, though, is that Trump knew about this report. CNN reported that Trump had already been briefed on the matter by the U.S. intelligence community — a matter that Trump PR magician Kellyanne Conway has already denied to Seth Meyers. The bottom line is that this report has been making the rounds of the journalistic, intelligence, and government community in the U.S., and while no one has been able to verify its claims with certainty, they have also not been able to make any definite claims of its falsehood.

Trump, of course, only sees one side of that coin. In his mind, apparently, the allegations are unverified, so they must not be true. Yet again, the country he is preparing to lead is being forced to witness its future president siding with a foreign country's leader above its own intelligence community.

If these two things coming in a flurry like this doesn't convince Trump to at least approach Putin with a shade of caution, then it's likely that nothing will. Trump's forays into foreign policy so far have not been at all comforting, for those who would prefer that Russia stays inside its own borders and for those who prefer to see peace between the world's most powerful countries. His response to the letter from European leaders and this latest round of allegations is yet more warning that the road ahead could be a tense one — for all the wrong reasons.