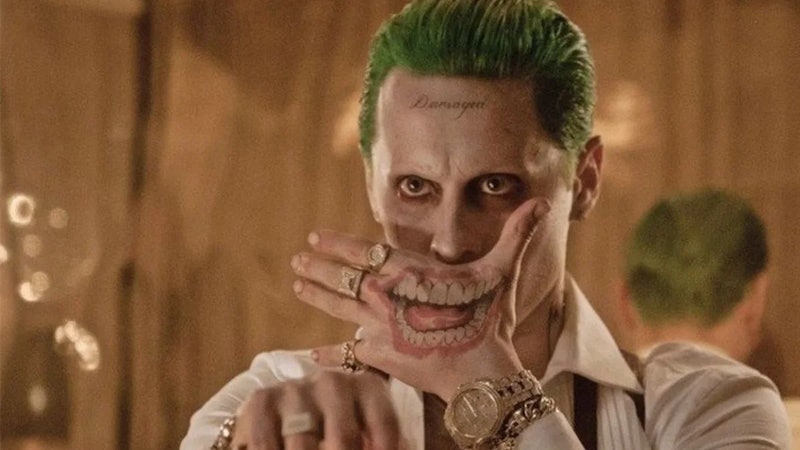 After a rough breakup, Harley Quinn (Margot Robbie) finds new purpose in Birds of Prey. For the first time we see Quinn as a single, independent woman — not just the Joker's sidekick. Still, because the film focuses on the better half of Suicide Squad's notorious ride or die couple, it's natural to wonder, will the Joker be in Birds of Prey? But the answer's right there in the film's subhead: "and the Fantabulous Emancipation of One Harley Quinn." This time around, Harley's having a girls' night out, no boyfriends allowed.

The movie opens immediately after Quinn and Mr. J break up, leading DC fans to think there might be a glimpse of the Joker. Or at least a flashback to the fight that finally made them call it quits.

But Robbie confirmed there's no Clown Prince of Crime making any sort of appearance in the film. Speaking to Variety, she set the record straight, saying that Leto's incarnation of the Joker doesn't show up, not even in a cameo. And when it comes to other versions of the Joker possibly popping up, Phoenix's more serious take just wouldn't fit. "I feel like Joker was much more grounded. Ours is different. It’s heightened," Robbie says.

This puts an official nix on the scenes seen in unofficial set photos shot by JustJared, showing a silhouette of the Joker kicking Harley out of their house. Even if the scene was shot, it's apparently not in the final film.

It certainly wasn't in the original incarnation of the film either. Birds of Prey screenwriter Christina Hodson told Variety she deliberately wanted the focus to stay on Quinn, the character she's enjoyed writing for the most. Asked whether film fans would be able to handle Quinn solo, Hodson noted that'd been the accepted case with comics storylines for some time now, and that "[Quinn] is such a cool, bold, fun, great character. She doesn’t have to be in anyone’s shadow. So I’m excited to see Harley stand on her own and be her own thing."

And given the nature of Harley and the Joker's relationship, it's understandable fans might think the Joker would show up. Which Robbie sees a fascinating flaw of her character. "It’s so hard. She’s a bit more Courtney Love than Debbie Harry this time," telling Empire about Quinn's reaction to the breakup. "She says, ‘I’m single, I don’t need him, fuck that guy.’ But if the Joker were to text her, ‘You up?’ she’d run. She’d fall to pieces.”

If DC fans want to catch the Joker, Birds of Prey isn't the movie to do so. But if you do want to see an amazing reimagining of the comic book genre — where women from all different walks of life banned together to save the day — make sure to buy a ticket.

More like this
A New Scooby-Doo Movie Confirmed Velma Is Gay & Twitter Is Pumped
By Radhika Menon
Everything You Need To Know About ‘Black Panther: Wakanda Forever’
By Bustle Editors
The 50 Most Powerful Characters In The Marvel Universe, Ranked
By Johnny Brayson and Nola Pfau
Lin-Manuel Miranda & Tituss Burgess React To 'Little Mermaid' Casting Backlash
By Radhika Menon
Get Even More From Bustle — Sign Up For The Newsletter