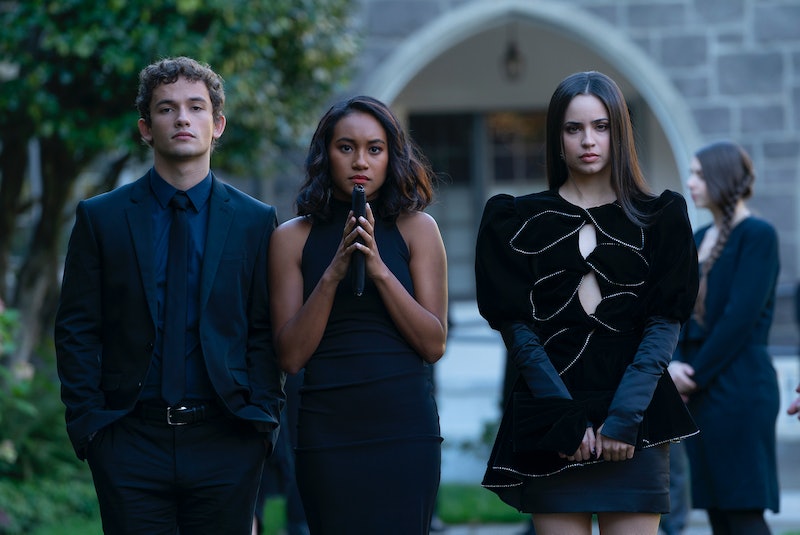 You just know that PLL: The Perfectionists is going to leave viewers with a wild cliffhanger at the end of Season 1. So it only makes sense for fans to start looking ahead to whether The Perfectionists will return for Season 2. These questions need answers, y'all! It sounds like the show has a lot of fun surprises in store should it get renewed, but its fate is still up in the air as of now.

Update: On Sept. 27, Freeform announced that it was canceling PLL: The Perfectionists after just one season, according to TV Line.

According to TV Series Finale, the show has dropped in ratings to about half of what the premiere brought in. It's averaging 250,000 viewers per episode, making it one of the lower-watched shows on Freeform. However, it does have slightly more viewers than The Bold Type, which was recently renewed for Season 4. Add into account that Freeform loves I. Marlene King (The Perfectionists is the third show she's worked on for the network), and Freeform may give the show a second chance simply because of its longstanding working relationship with King.

The show may not have the most viewers on the network, but those it does have are very passionate. Fans recently got #RenewThePerfectionists trending on Twitter with thousands of tweets coming in on the topic.

If the show were to be renewed, it could return as soon as this fall or winter, or it could air in March 2020 like how it originally premiered in March 2019. And, a second season could see the return of more original Pretty Little Liars stars.

Both Troian Bellisario and Ashley Benson (who played Spencer and Hanna) initially expressed interest in directing episodes of The Perfectionists, but Sasha Pieterse (who plays Alison) told Entertainment Tonight that that scheduling was too hard to pull that off in Season 1. "I think Ashley and Troian are going to try to direct next season, which would be amazing, if we get a next season," Pieterse said. "We love to have whoever on the show, whoever wants to join us."

Aside from Bellisario and Benson, Lucy Hale (who played Aria) expressed interest in appearing on the show as well. In another ET interview, King said that any cameos are possible because of how the show was built. "I think our OG PLLs are really supportive of this show and ... they’re always welcome. We would always want to find a place for them," King said. "I think there's just such a seamless sort of transition to this new show that it's always possible for people to just come in and sort of drop in and visit us."

As for the new characters on The Perfectionists, there's still a lot to explore about them as well. We've seen Ava and Caitlin have conflicts with their parents, but who are Dylan's parents? What's going on with Taylor now that she shot Jeremy? Is Jeremy OK? What is Claire Hotchkiss' deal? For the latter, Kelly Rutherford told Bustle recently that she's hopeful that her character will get even more screen time in a potential Season 2. "We get that she's obviously a mother who's trying to protect her daughter and trying to find out who killed her son ... but who is she really? What makes her tick and why is she doing certain things?" Rutherford said.

Hopefully viewers get the answer to those and all the other questions this show has raised over its 10 episodes in a whole new season filled with PLL cameos. What could be better than that?