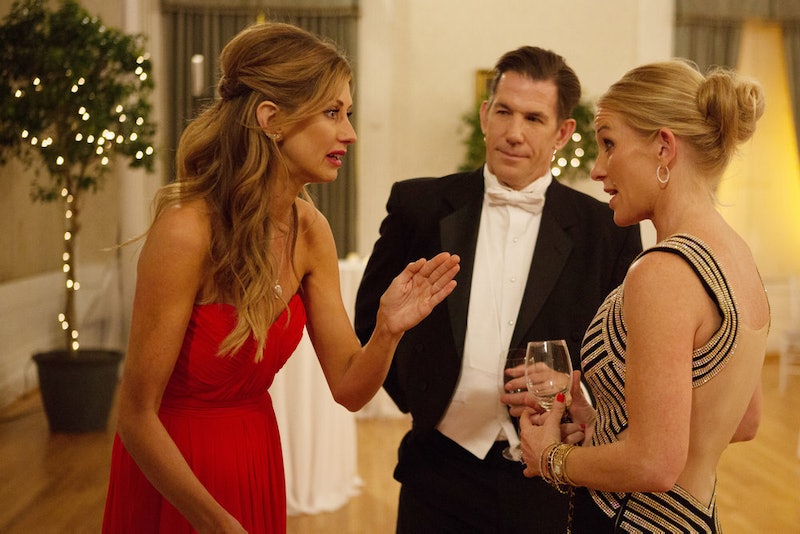 Usually it's sort of fun when the real word trickles into a reality TV show, like on Keeping Up With The Kardashians or Vanderpump Rules. Getting behind the headlines can make for good television, unless the headlines are about alleged crimes a TV star has committed. Southern Charm began with one of its stars looking to rehabilitate his image after a failed political career, but after assault allegations came out earlier this year, it doesn't look like Thomas Ravenel will be on Southern Charm Season 6. At least not as one of the stars.

In September 2018, Thomas was arrested for assault and battery after a warrant was issued for an alleged 2015 incident with his former nanny, per Us Weekly. According to a court affidavit, Thomas allegedly stripped naked in front of the victim while attempting make the victim touch his genitalia. Another victim came forward in May 2018 with a similar story; model Ashley Perkins alleged that Thomas assaulted her mother after going on a Tinder date with her, as reported by People. Bravo reported in September 2018 that due to these pending court cases, Thomas would not be returning to Southern Charm for Season 6.

Per E! News, Thomas shot back after the announcement of his departure, writing on his now-private Twitter that he didn't want to be on the show anyway. "I'm not doing the show anymore," he said. "In the contract they have the right to fictionalize your story. They took advantage of me. I decided I've got too much to lose and informed them I'm not coming back." Recently, he's also called being on the show the "worst" decision he's ever made, according to Page Six.

That said, just because Thomas is out of sight on the show doesn't mean he'll be completely out of mind. Thomas is the father of Kathryn's two children, and in the preview for Season 6, Kathryn can be seen crying to Craig about how if Thomas goes to jail for his alleged crimes, she'll be a single mother to her kids. Thomas' not being on Southern Charm may not affect much, but his being in prison would change their family irrevocably.

If anything, the cast members are going to talk about Thomas, even though Thomas isn't there, because Thomas was the source of drama for, uh, every season of Southern Charm so far. It's hard to step away from that, especially when the reason for his departure is reportedly so unsavory.

Speaking of difficult and dramatic, the Southern Charm Season 6 preview also shows Ashley, Thomas' on-again, off-again girlfriend, edging for another shot at being on the program. Ashley told People that she wanted a second chance to be on Southern Charm to tell her side of the story because she was so "wrapped up in Thomas' drama" when she first signed onto the show. She said:

“I wish [producers] had the decency to contact me and give me a chance. Because I would like to have a redemption story, the same way Kathryn did. I’m not going to fight and I’m not going to play dirty. I’m going to smile and be nice... I’d like to give viewers the chance to see another side of me.”

It doesn't seem like producers took the bait, even though Ashley shows up and seems to get thrown out of Patricia's house later in the season, according to the promo. So even though Thomas won't officially be on the show, his presence will most certainly be felt.

More like this
Jinkx Monsoon Is About To Get Real Sketchy
By Sam Ramsden
What’s New On Netflix: Ana De Armas’ 'Blonde' & A Nick Kroll Special
By Arya Roshanian
What’s New On Netflix: Meet 'The Real Bling Ring'
By Arya Roshanian
Confusion Reigns After Kanye Changes His Instagram Profile Pic To Kris Jenner
By Jake Viswanath
Get Even More From Bustle — Sign Up For The Newsletter