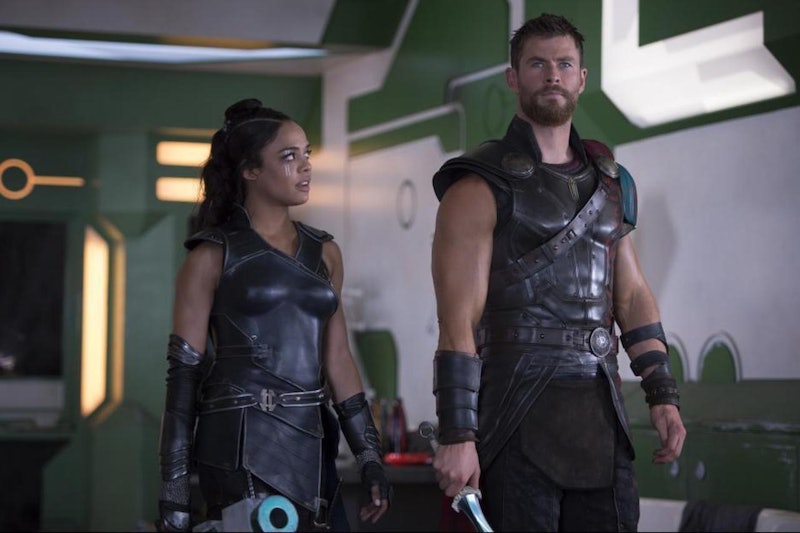 In the latest superhero flick to come out of the Marvel Cinematic Universe, Thor: Ragnarok boasts a newly sheered Hemsworth, a bevy of big laughs, and an entirely new character: Tessa Thompson as Valkyrie, the often drunk scrapper who captures Thor on an alien planet. Initially, she appears to be bad news for Thor, sacrificing him to a gladiator ring to fight for his life, but it's easy to see there's more to her than a tough, boozy exterior. And with Jane, Thor's former flame completely out of the picture, the inevitable question arises: Will Thor and Valkyrie get together in Ragnarok?

"We decided that we don't need to try and jam a romantic subplot into this movie," the film's screenwriter, Eric Pearson, says on the red carpet premiere of the film in Los Angeles. "If it happens organically, then it happens," he continues, saying that instead of romance, the film should be used to "figure out who Valkyrie is."

He has a good point. Valkyrie is a brand new, completely compelling and worthwhile character, and it's to the film's benefit that they spend screen time developing her as an individual instead of thrusting her into a romantic plot with Thor. "Valkyrie had never been heard of before this movie," the screenwriter says.

In the film, Valkyrie is fleeing from a dramatic past. She was once part of the Valkyries, an all-women elite army intended to protect the throne of Asgard. But when her fellow soldiers were killed fighting the Goddess of Death, Hela (Cate Blanchett), she left her fighting days behind. She traded in duty for a bad drinking habit that plays out as both comical and sad.

"She's a lone wolf," Pearson explains. "She's a little bit more selfish, but she's justifiably selfish. She's recovering from the turmoil and she's turned it inwards. Drawing the hero back out of her is something we found to be really rewarding."

And seeing this sort of female character on screen in a big budget, widely consumed film is paramount. She isn't a cookie-cutter hero, and she isn't an anti-hero either. She's an emotionally wounded fighter with a drinking problem, and while we may see men in this position — hardened from the battlefield and nursing their wounds with alcohol — on the big screen, it's rarer for women.

There's even a moment in the film where Thor calls her out for drinking all the time, and she says, "I'm not going to stop drinking." Obviously, glorifying drinking excessively is not a wise move, but this isn't what the film is accomplishing. Instead, it's giving viewers a leading lady with an undeniable vice — a woman who is both heroic and deeply flawed. "Those [types] of characters tend to skew male," Pearson says, stating, once again, that Valkyrie is so much more than a love interest for Thor.

However, this is not to say a romance between Thor and Valkyrie is off the table moving forward. Pearson says it best: "They are both very good looking people. It's hard when you're risking your life and saving the world not to be attracted to the very attractive person next to you."

And audiences might catch glimpses of flirtation between these characters in Ragnarok. "Those moments are as a natural progression of them growing closer. They have a great rapport," Pearson says. And while he admits he hasn't thought too much about the extent of their romantic relationship in any potential sequels, he did say that no matter what happens to them moving forward — whether they become lovers or enemies — he's intent on "keeping it fun."

So sure, get your shipper names ready — but Valkyrie is one Marvel newbie worth investing in, regardless of a potential romance with Thor.

More like this
At 28, Rosie Perez Risked Her Career To Stop Playing Stereotypes
By Gabrielle Bondi
Rupert Grint Just Shared A *Major* Update About Ron Weasley’s Future
By El Hunt
Twitter Is Overjoyed By Angela Bassett’s Record-Making Oscar Nomination
By Maxine Harrison
Anne Hathaway Shared A "Thrilling" 'Princess Diaries 3' Update
By Darshita Goyal
Get Even More From Bustle — Sign Up For The Newsletter
From hair trends to relationship advice, our daily newsletter has everything you need to sound like a person who’s on TikTok, even if you aren’t.